The global poultry industry has seen a huge advancement in the past few decades, as of 2016, the FAO reported over 23 billion individual chickens in the world – equating to roughly 3 birds per person. The production of poultry meat in the EU has continued its growing expansion into 2019 and is predicted to continue upwards into 2020. However, the EU produces relatively little chicken meat and eggs when compared to East and South East Asia who produce 42% of chicken eggs and South America who produce 18% of global poultry meat. Nevertheless, thanks to continuing population expansion and political changes arising in the UK, consumption is expected to maintain its upward trend which may well incite a rise in the number of poultry/poultry farms in the UK and indeed, EU. Despite eggs and chicken meat being a very popular food item across the globe, this industry produces a relatively small footprint in terms of greenhouse gases (GHGs). On a global scale, chicken meat and eggs grouped together produce around 790 million tonnes in CO2 equivalents per year which may sound like a lot, but in comparison to pigs (819 t) and cattle (dairy + beef, 5,024 t) gives a bit more perspective (Figure 1). 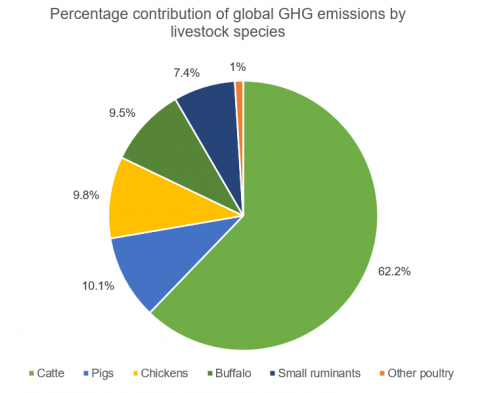 Figure 1: Graphical representation of global emissions by each livestock species, data taken from GLEAM, by the FAO (2017).

There are three main sources of GHG emissions in livestock as a whole: enteric emissions arising from fermentation and feed digestion, feed production and transport and manure (handling, storage and application). Often emissions from feed production and associated issues, such as land-use change and environmental damage or pollution, are not considered when discussing GHGs from livestock, however, for monogastrics in particular, this remains a key issue in terms of sustainability. Another key producer of GHGs in the poultry industry is the burning of fossil fuels to produce electricity or the burning of propane and diesel, this contribution is accounted for elsewhere but is worth bearing in mind when considering the environmental impact of livestock enterprises. For poultry, manure is the largest source of GHG emissions – ammonia (NH3) is of greatest concern and in itself is a powerful acidifying agent which may also be converted to the potent GHG nitrous oxide (N2O). Globally, chickens are among the most important contributors of NH3, which not only has the potential for significant environmental impact (such as soil and water acidification) but can cause serious health problems for chickens in the respiratory tract, eyes and immune system. Ammonia also has a negative impact on meat quality at slaughter, leading to an increase in condemned carcasses and can cause odour problems in the local area. There is also some contribution from methane (CH4) to the pool of GHGs stemming from poultry production, arising from manure and to a lesser extent enteric fermentation, though when compared to cows and even pigs, this accounts for a very small proportion of emissions from poultry. The second article in this two-part series will focus in detail on chicken manure, associated emissions and potential for mitigation.

Evolution of the chicken

Like all livestock animals we see today, the modern broiler chicken as we currently know it has undergone significant changes over the past century, with a great deal of this change occurring in the past 50 years. Through meticulous selective breeding for the most productive, fast-growing, high yielding and healthy animals, broiler chickens today are far more efficient than their ancestors. This, in turn, has led to more sustainable practices, over the past 45 years, the US poultry industry has reduced use of fossil fuels by 39%, water use by 58% and potential climate change impact by 36% per 1,000 kg of meat. In a similar time period, yields also increased dramatically, growth rate has been of primary focus since the 1950s, but more recently emphasis has been placed on the yield of breast meat, liveability and feed use efficiency. Between the years of 1950 and 2005, broiler growth rates have increased by 400% and the average yield of pectoralis major (breast) muscle has increased by 79- 85%. Improvements to the production system also impact land use, with 72% less agricultural land occupied in the last 50 years. This improvement has been brought about by intensification on a huge scale – a contentious subject that in some countries results in compromised animal welfare. The same may be said of egg production, with most commercial hens laying 260 eggs per year and some improved breeds laying as many as 300. Thanks to intensive systems and improved breeds the UK now produces around 8,862 million eggs per year, but again, whilst these intensive, large scale systems have allowed the industry to become more efficient and sustainable in terms of resource use, animal health and welfare has become a pressing issue.

Chickens and other poultry are monogastric, meaning that they possess one gastric stomach, nevertheless the digestive tract of birds is uniquely specialised. Distinctive in the bird’s digestive anatomy is the crop, a digestive organ located between the mouth and ‘true’ stomach (Figure 2). This small pocket stores food and water allowing it to slowly trickle through to the stomach, this is an evolutionary mechanism that allows birds to consume large amounts of food then move to a more secure location to digest it. The second specialised organ in the chicken’s digestive tract is the gizzard or the ‘mechanical’ stomach, located after the ‘true’ stomach (Figure 2). This organ uses two sets of strong muscles along with ingested stones to grind and mash food material. This organ helps compensate for the chicken’s lack of teeth. Nutrient absorption mainly occurs in the small intestine and water re-uptake in the large intestine – note the lack of fermentative digestion which would give rise to more GHGs (Figure 2). Because of this specialised and non-fermentative digestive mechanism, enteric emissions from poultry are minimal at 3.03 mg/yr of CH4 and 0.006 mg/yr of N2O. 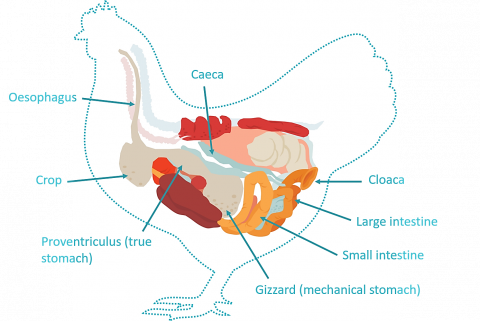 Figure 2: Diagrammatic representation of the digestive anatomy of a chicken. 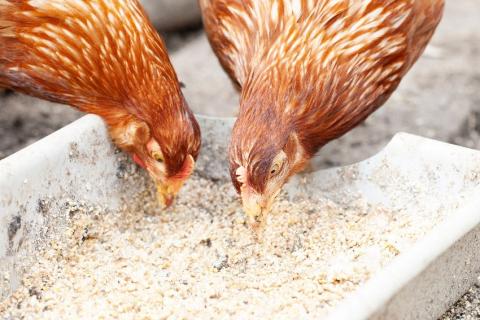 As explained in a previous article, exploring emissions from pigs, GHG emissions from feed production are usually considered elsewhere, yet they play a significant role in the environmental impacts and GHG emissions produced by chickens. The chicken’s diet consists largely of grain or processed, commercial feeds containing maize, wheat and soybean cake/oil. There are many implications of a grain-based diet, such as land-use change, deforestation, erosion of biodiversity, soil erosion etc., which subsequently contribute to profound environmental damage and climate change. As the majority of soybean and indeed some other grains such as maize and wheat are imported from other countries, this damage occurs well out of sight and out of mind for many consumers. The feed-food debate is also applicable here as land used to produce chicken (and indeed all livestock) feed could be used to produce human-edible food. This is an ongoing discussion comparing the use of land to grow plant-based human foods with growing animal feeds, which in turn, generate protein-rich human food sources. N.B. It should be noted that the majority of research concerning chickens is carried out in broiler chickens as opposed to laying hens.

Whilst the modern broiler chicken has a vastly reduced intake compared to animals 50 years ago, there is still room for improvement. A strategy we see in many different species of livestock is the use of targeted amino acids (AAs) which allow a diet lower in protein to be fed. The amino acid lysine is abundant in breast meat and has a significant effect on its yield, inclusion rate in the diet, of course, depends on the developmental stage of the animal. In early life, up to 5 weeks of age, feeding a diet with additional amino acids can increase breast meat yield by 1%, reducing to 0.5% at 5-9 weeks of age. However, lysine is not the only essential amino acid (EAAs) in chickens (essential meaning that the chicken cannot produce it by itself so it must be included in the diet) and an optimum balance has been established. A study investigating the use of a low protein diet supplemented with AAs found no difference in body weight or carcass characteristics between the experimental diet and a control diet of 22% protein. However, protein retention and efficiency were improved in the experimental diet as well as significantly lower nitrogen excretion. The study suggests that lowering the protein content of the diet (as low at 15%) but balancing with EAAs could reduce the environmental impact of broilers whilst having no negative impact on production characteristics.

Supplementing the diet with EAAs might go some way to reducing the environmental impact of broiler waste, but it does not address the global impact of feed production. One train of thought to reducing reliance on fish or soybean meal in poultry diets is the use of insects as an alternative protein source. A variety of insects have been investigated, including house flies, earthworms, grasshoppers, silkworms, locusts and crickets, all of which offer high levels of protein (40-60%), polyunsaturated fatty acids, chitin and in some cases, antimicrobial peptides. Insects are a natural food source for chickens and indeed most birds and their production does not cause the environmental issues seen with soybean meal. Studies have found no adverse effects of the replacement or partial replacement of soybean meal with insect meal, in fact, several studies using mealworm larvae found improved feed conversion efficiency and improved weight gain. Alternative diets using grasshoppers have also reported increased antioxidative potential of the meat, the result of which is a longer storage or shelf life. Many insect species are now being successfully farmed across the globe for both feed and food purposes on a large scale and sometimes in vertical systems. Insect farms may be structured to utilise organic agricultural wastes and by-products from the agri-food industry which can then be turned into a valuable feed source. The waste products from insect production, known as frass as a valuable biofertiliser, providing high levels of nitrogen (N), potassium (K) and in particular, phosphorous (P) whilst also supporting soil microbial activity. Certainly, the scientific literature supports the use of insects as a sustainable alternative to soybean meal in poultry diets, with studies consistently showing lowered feed cost, no adverse effects on production and even improved performance in some cases. The next hurdle to consider will be consumer perception and the adoption of insect farming in the UK.

The global poultry industry is a rapidly expanding market whose growth is a direct response to demand as a result of population growth. Despite producing some of the lowest levels of emissions amongst livestock, this means that the role of the poultry industry in GHG production and climate change is likely to increase in size along with the human population. The chickens uniquely adapted digestive system produces minimal levels of N2O or CH4 as very little fermentative digestion occurs, but the production of feeds (in the form of grains and soybean) has the potential to cause serious environmental damage. As the majority of the UK’s soybean is imported, issues such as deforestation, erosion of biodiversity and GHGs from processing occur elsewhere. Using alternative sources of protein could help to alleviate pressure on soybean, reduce environmental impacts and on-farm feed costs. Insects present an excellent alternative as a natural and protein-rich food source for chickens. Numerous scientific studies have evaluated the use of insects as a soybean replacement and have not recorded any detrimental effect on production or carcass traits, although improvements in weight gains, feed conversion ratio and antioxidant levels in the meat have been observed. The next step towards replacing soybean with insects will be assessing UK consumer perceptions and adapting large-scale production models for use in the UK, but there is no doubt that they offer a sustainable and effective alternative to soybean.