The use of thermal imaging technology to enhance livestock production

The application of thermal imaging in livestock is an innovative new technology, which can aid in the detection of injuries, lameness, infections and injection site reactions whilst minimising labour costs. Often, thermal imaging can detect a problem before it becomes apparent to the naked eye (sub-clinical levels) enabling rapid treatment, which prevents the disease from progressing.

Thermal imaging is routinely used in human medicine and equine veterinary practice to identify problem areas. Thermal imaging lends itself to use in mammals as they maintain a constant body temperature regardless of their external environment (endothermy). As such, temperature changes often occur as a result of inflammation – a hallmark of which is local vasodilation which leads to an increase in radiated heat. Inflammation can act as an indicator of infection and tissue/muscle injuries, which makes thermal imaging an excellent diagnostic tool.

Infrared rays are used by thermal imaging cameras to create a dynamic, real-time picture (thermogram) of the object. The device converts infrared radiation from the surface of an object (for animals, the skin) into

electrical impulses that can be visualised on a monitor using a colour gradient to indicate temperature (Figure 1). Often, thermograms are interactive and the temperature of a specific area (as small as a few centimetres) of the animal can be given. Veterinary thermography uses cameras that can detect temperature differences as small as 0.05°C and that scan at a rate of 30 times per second allowing videos to be recorded. As such, many devices offer additional functions, such as automatic body condition scoring and video image analysis for lameness detection and behaviour assessment. More recently, sensitive and accurate adaptors have become commercially available for use with a smartphone, greatly increasing ease of use, overall convenience and cost price.

Thermal imaging offers several advantages over traditional hands-on diagnosis. The use of a thermal imaging camera allows the farmer to maintain a safe distance from the animal reducing health and safety risks associated with working livestock, as well as stress on the animal’s part. Thermal imaging can also reduce the need for additional labour, as just one person is required to image and scan each animal, with data being stored or sent to the cloud for later analysis. Thermal imaging can detect problems before clinical symptoms become obvious (in mastitis for example) and can pinpoint the exact problem area (e.g. lameness) allowing the farmer to treat before the symptoms arise. This helps save the farmer money in investigative costs and unnecessary treatments. For example, this technology has successfully reduced the use of antibiotics on beef farms as lameness can be treated with an anti-inflammatory drug instead of antibiotics. This reduces the risk of antibiotic resistance and saves money on medication and wasted milk, as well as reducing the use of prophylactic antibiotic treatment.

Tissue inflammation is a reliable indicator of infection, a hallmark of which is heat. Research has found that additional diagnostic tests (e.g. somatic cell counts (SCC)) in conjunction with thermal imaging significantly increase the accuracy of mastitis diagnosis. 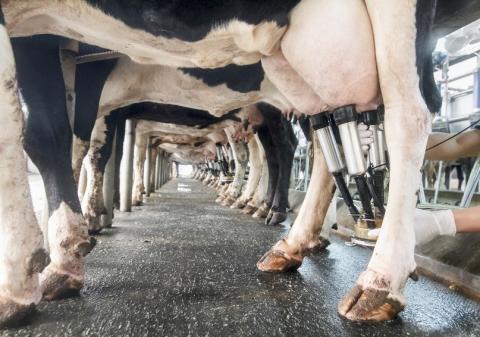 Studies have found that whilst the cow’s overall body temperature does not vary according to infection status, the temperature of the udder was significantly higher in those with mastitis. In cows with sub-clinical mastitis, the udder was on average 2.4°C warmer than the general body temperature. In those with clinical mastitis, temperature increases of 1- 1.5°C were observed. When taking measurements it is also important to understand that the skin temperature of the udder does vary considerably – one study found that the temperature at the tip of the teat was 30.1°C whilst at the base of the udder the temperature increased to 35.1°C. When using thermal imaging and SCCs in conjunction, detection of mastitis has been as rapid as 4 hours post-challenge with a controlled E. coli infusion. A potential drawback in the use of thermal imaging is the lack of reference material. In order to make a useful and meaningful comparison, it is important to have readings for clinically ‘normal’ animals. However, this can vary between breed, age, parity, stage in the reproductive cycle etc. so it is vital that a robust database is established using baseline values for each herd or flock. An electronic identification system lends itself to this situation to help maintain correct and accurate records for individual animals. As the method is still in its infancy, it would also be necessary to couple thermal imaging with other mastitis indicators such as SCC to ensure reliability in diagnosis.

A core health issue for livestock farmers be it cattle, sheep or pigs, is lameness. Lameness may arise from any number of causes and can be difficult to pinpoint, sometimes requiring veterinary investigation. Economically significant diseases such as foot rot and contagious ovine digital dermatitis (CODD) cost the Welsh sheep farming industry a great deal, with a report in 2014 estimating a loss in profitability by £14 per ewe. Generally, lameness is caused by infection (i.e. abscesses, CODD, foot rot) but may also be caused by injury (muscular injuries due to a kick for example), both of which can be identified by increased local temperature using a thermal imaging camera. The majority of scientific research focusses on cattle, but many of the concepts may also be applied to sheep and pigs.

Research has found that different parts of the cow’s foot show different temperatures under clinically normal conditions, for example, the temperature of the central and interdigital area of the hind foot is consistently higher when compared to other areas. It is essential to take account of these differences to generate accurate data and avoid false positives and unnecessary treatment. When comparing cows affected by foot disease and healthy animals, lame cows showed higher foot temperatures in all regions of the foot. Further, a study examined the use of thermal imaging in diagnosing horn lesions in dairy cows in relation to lifting and cleaning the foot. It has been reported that dirt influences the reliability of thermal imaging, as the ability of the foot’s surface to radiate and conduct heat is impaired. However, when the cow’s legs are cleaned, this has a cooling effect, which also confounds results. It was found that whilst dirt does influence the temperature threshold above which lesions were identified, it did not affect the differences between those with lesions and those without. The sensitivity of the camera increased from 80% to 91% after the foot was cleaned whilst specificity decreased by 5%. It was also found that after washing the feet, the rate of false positives more than doubled, therefore the optimum trade-off between sensitivity and specificity was achieved without having to clean or lift the feet by using a 27°C threshold on dirty feet.

The use of thermal imaging in lameness detection has also been applied to pigs. The study found that the camera was sufficiently sensitive to detect some patterns associated with lameness, however, several factors confounded the results: Limb conformation, physical activity and parity. The study found that limb temperature fluctuated depending on the time of day and time relative to feeding, highlighting the importance of consistency when taking measurements and the need for robust baseline data for comparison.

As previously discussed, thermal imaging is a useful diagnostic tool in the detection of infections as the primary indicator is inflammation – characterised by heat and swelling. Thermal imaging cameras have been applied in the diagnosis of respiratory disease in calves where animals in the early stages of illness were identified up to a week before clinical symptoms presented. Data indicated that 4-6 days prior to the onset of clinical symptoms (core temperature ≥40°C and high white blood cell counts) diagnosis using a thermal camera was more accurate and efficient than the industry standard practice of clinical scoring. Thermal imaging has also been used in the diagnosis of bluetongue virus (BTV) in the early stages, where the technology was able to distinguish between sheep that had a low-grade fever and those that were clinically normal with a sensitivity of 85% and specificity of 97%. The study used eye temperature as a non-invasive indicator of temperature and suggests that continuous monitoring of sentinel animals could help reduce BTV outbreaks. In this instance, the experiment eliminated confounding factors such as environmental conditions, breed of sheep and dose of virus, which would likely have an effect on readings on-farm.  In poultry, thermal imaging has been employed in the detection of bumblefoot with encouraging results; the thermal imaging camera demonstrated an accuracy level of 87% when presented with clinical cases, compared to 27% on visual inspection. However, when applied in the detection of foot and mouth disease in cattle a 50-60% detection rate was reported, indicating that the technology may not be applicable to all diseases or that the process requires some optimisation.

In addition, thermal imaging has been used to detect ear tag infections in lambs. Before tagging, the average thermal temperature of the ear was measured and significant temperature differences were detected between infected (26°C) and non-infected ears (19°C) before clinical symptoms emerged. As a side, the study found that electronic ear tags caused more problems (80% infection rate) than conventional, visual ear tags (50% infection rate). This may be due to the greater weight of EID tags that contain an electronic transponder, which may also contribute to the poor retention rates anecdotally reported by farmers. Since the re-tagging of animals results in increased cost and animal stress, early detection and treatment of inflammation of ear tissue could be useful.

Thermal imaging cameras present a new and innovative way of improving animal health and welfare which consequently increases productivity and profitability of the farm business. Thermal imaging cameras are becoming more convenient and easy to use, with sensitive and accurate adaptors available for smartphones. Thermal imaging has been used with encouraging results in multiple scientific studies as well as several on-farm case studies. The technology is mostly used in the early diagnosis of health problems such as mastitis, disease and infection and to identify the source of lameness. In order to draw meaningful results from images, it is vital to build a robust baseline from clinically normal animals in the herd/flock. It is also important to minimise the confounding effects of environmental conditions and time of day and to account for temperature changes according to breed, age and parity.