The lambs were all weighed at least monthly (from November to the end of January) to monitor and record their daily liveweight gain (DLWG). Lambs have been closely monitored throughout the duration of the project for any related or unrelated health and welfare issues. 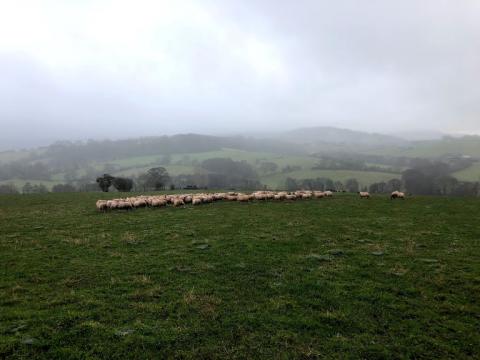 The table below shows the average daily liveweight gain of each group in the first and second part of the project. The final bars are the averages across the whole project. 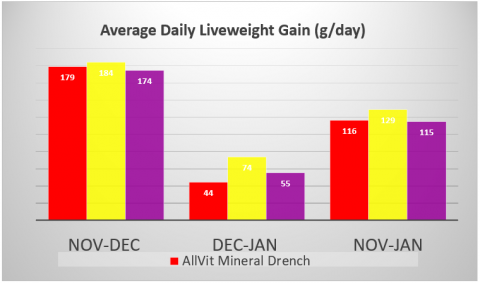 Interestingly, the growth rates significantly dropped in the second part of the project (bear in mind that there were no apparent trace element deficiencies). We would presume this is due to the drop in quality of the grass quality – this was a particularly wet winter.

Across the project, the Downland bolus group (yellow bar) did consistently better than the other groups, with an overall average DLWG of 130g/d. By the end of the project, lambs from this group were on average 1.2kg heavier than lambs in the other groups. Based on the average price of 220.4p/kg for finished old-season lambs (OSL) at the end of Jan 2019, they were worth £2.64/head extra.

Blood samples were collected at the end of the project from the same five lambs of each group to see if their trace element levels had increased/maintained in line with what is claimed by the products. The blood results showed that regardless of what trace element supplementation treatment was used, no deficiencies were identified (for cobalt, selenium and copper) in any of the three groups. 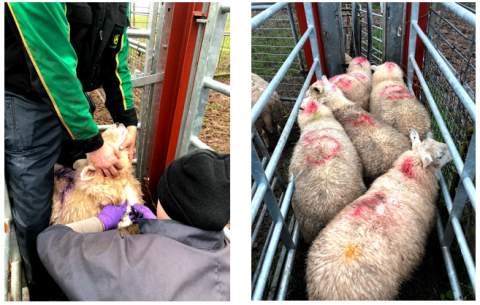 Farmer Guy Parry and farm worker Sam can be seen below, along with Victoria Fisher (vet at Farm First Vets) and the trial lambs. 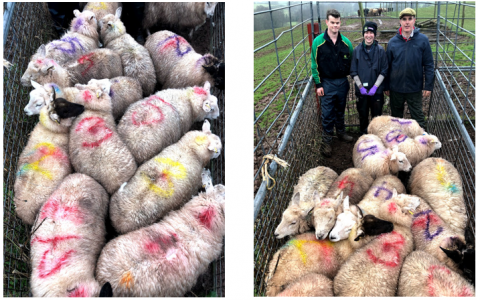 Seven lambs died throughout the duration of the project.  All deaths occurred in the first part of the project, with no deaths after December.  The split of deaths between treatment groups can be seen below. 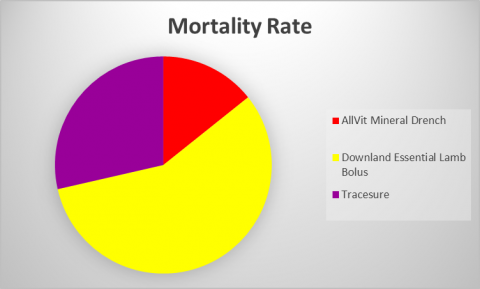 Which was the most cost-effective treatment? 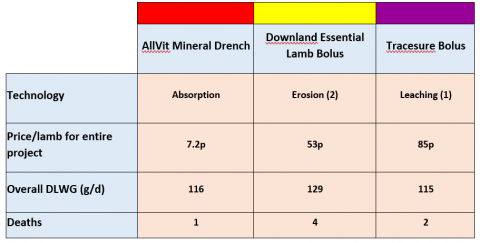 Although the mineral drenching looks to be by far the most cost-effective method of supplementing trace elements in lambs, by looking at the above table, many factors must be taken into consideration. Drenching was a far more laborious task than the one-off boluses.  Monthly drenching was done through the duration of this project, however fortnightly drenching should have been carried out following the directions of use from the datasheet.  Labour costs and time must be taken into consideration when calculating the cost of treatment per lamb (current minimum wage>25 year old = £8.72), plus the additional stress on the stock could exacerbate; leading on to other animal health issues such as pneumonia, lameness etc. Based on the average price of market liveweight prices, the lambs that had received a Downland bolus gained £2.64/head more than those lambs that received a Tracesure bolus, which performed the poorest overall in this project.