The following report has been written by the farmers and forester who took part in the visits. All views and opinions included are their own.

This arable Business Group established in 2014 focuses around the Cardiff Monitor Farm, Penmark Place Farm (Julian Radcliffe). All in attendance on the study tour are active participants in the group’s benchmarking activity.

Is revolutionising crop establishment through the uptake of, for example, cross slot technology in marginal areas such as north east Scotland and Wales a step too far or not?

Is evolving the more traditional establishment methods to mitigate the current business environment, encompassing attention to detail in timeliness and soil and crop management a better option to enhance profitability in those marginal areas?

Is either approach enough to counteract the market pressures currently being exerted on cereal producers and do these businesses need to adopt a mixed or diversified business structure?

Arable Business Groups sharing their individual benchmarking data are an ideal vehicle to facilitate the exchange of knowledge between participating growers to debate and answer these questions. Being able to visit an area with such a similarly unique environment and examine their practical experiences of coping with it will generate discussion and debate. This will provide practical information to be considered for use within their own businesses. 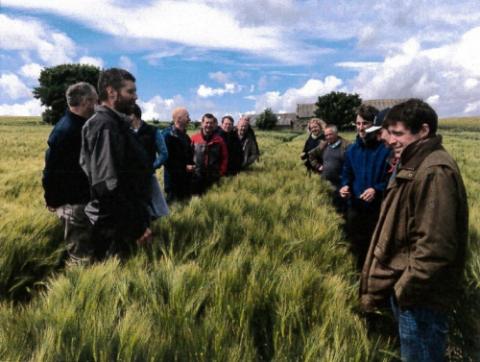 Family farm growing approximately 300ha of combinable crops on a traditional system. Some contracting work undertaken and a poultry enterprise. Attention to detail was the key to the success of this business, which was highly evident from touring the farm.

To owner, Alan Grant, precision and measurement are constant daily practice. To justify his wish to own a large sized sprayer, 3000acres of contracting spraying is undertaken each year.

The farm also operates within a machinery joint venture with two neighbouring farms in order to combat the constant battle with ever rising costs. Other strengths of their individual joint venture included complimentary skills, allowing them to focus on the jobs in which they are most proficient; significantly reduced capital investment; encouraging the farmers involved to focus more effort into planning and budgets; and allowing them to operate larger and more advanced equipment. It does though require a surrender of control and timeliness.

Family farm growing around 300ha of combinable crops. Informally trialling reduced cultivations with mixed results. Poultry and beef enterprises as well as wind turbines. We were joined by soil scientist, Blair Mackenzie. Minimum tillage plots did not shine in comparison to ploughed ground with control of weeds lessened in this area.

High soil health/organic matter levels at South Redbog were the focus of Peter’s farming and have resulted in a particularly high yields on the farm. The soils at South Redbog have high similarities to those of many of the Cardiff discussion group. We debated the advantages of tillage on these soils with the group in agreement that it brings a bigger burst of nutrients within the soil.

At their own meetings the Cardiff discussion group have previously investigated the possible advantages of adopting a no-till strategy. Peter highly emphasised that the decision for adopting zero till should not be to improve soil health; the soils should be healthy already for it to be adopted.

Further discussion regarding the use of soil testing evaluated that soil type has a large impact on how test results should be interpreted, making it vital that farmers know where soil samples were taken and what the soil texture was.

Andrew and George Booth, of Savock Farm, Aberdeenshire, grow 1000ha of combinable crops and keep 100 head of beef cattle on two farms and operate a successful farm shop. In the past three years the farm area has risen from 300ha to 1000ha. The focus of this visit was on the businesses fixed costs; with expansion do fixed costs and cost of productions change COPs (crop output production) or are you just a busy fool?

They face the challenges of heavy, unforgiving land and drying grain without a dryer. With 30% of the farm GPS soil mapped, they have started to invest in precision farming. Andrew and George are looking to improve marketing and future-proof their business.

When considering cost saving versus businesses risk the discussion evaluated that cost saving can be done, but too much can leave you without what you need to do the job. If you are reducing passes in an attempt to save money, then be prepared for less hours for staff, which the group concluded could be a positive or negative; hours worked on a family farm could be reduced, but reducing the work force’s hours could also result in guilt. Essentially, yield may be king but not at any cost. The primary job for farmers is to fully understand their cost of production.

Mackie’s of Scotland is a fourth generation family business which has been farming at Westertown, Aberdeenshire since 1912 and making ice cream in a ‘sky to scoop’ chain since 1986. The vertically integrated 1500 acre arable farm supports a 450 cow dairy herd which supplies fresh cream and milk for their dairy ice cream.

The main focus of this farm visit was the diversification projects on the farm. The new solar panel farm generates electricity equivalent to the amount required for Mackie’s to make 4 million litres of ice cream. Mackie’s new 10-acre solar panel farm is approximately the area covered by five football pitches.

To date, Mackie’s primary source of renewable energy has been wind power, which provides up to 70% of the farm’s energy demand. The new fourth wind turbine will bring the total wind power up to 3.0MW capacity.

Mackie’s worked on the successful instalment of its 400kW biomass plants earlier this year, which provides the energy for directly heating the office and staff housing.

The findings of the study tour are being illustrated through an on-farm trial at the monitor farm investigating cultivation choices. Monitor Farmer Julian Radcliffe has split a field at Penmark Place Farm, into four plots with a different establishment technique for each plot. For the loamy soils in the Vale of Glamorgan the group have concluded that a disc and tine cultivator is the most suitable. Through the benchmarking activity we will also produce the cost implications of each different technique.

Inevitably the farmers involved also discussed a wide variety of other topics (aside from crop establishment) during the various visits. Below are a number of the key take home messages which I encouraged them to list on our journey home. We will also be investigating a number of these at our winter 2016/17 meetings.

From a social point of view, being a newly established group, this study tour was also a very useful tool to help ensure that the farmers involved in the group ‘gelled’ together. Feeling comfortable to share information with each other is a crucial part of the benchmarking activity.

We are extremely grateful to Farming Connect for allowing us the opportunity to embark on this trip.