Developing a blueprint for controlling malignant catarrhal fever (MCF) in bison, buffalo, and cattle in Wales 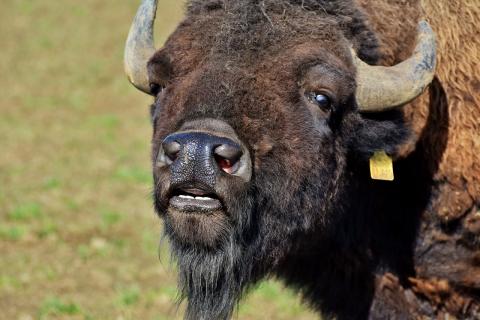 In the UK and Wales, some pioneering producers have found a ready market for bison meat.  It is considered to be a healthy red meat alternative to traditional beef products being lower in fat, cholesterol and sodium.  It also has a very similar protein content, is lower in calories and is high in iron and vitamin B12.

As such, bison are considered as one option for farmers looking to diversify.  However, bison are challenging not only due to their temperament and sensitivity to stress but also their increased susceptibility to malignant catarrhal fever (MCF), which is considered the disease-limiting factor to successful production.

MCF (caused by the virus OvHV-2) can affect cattle, bison, water buffalo, deer, yak and sheep are considered the main reservoir host. However, bison, buffalo and deer are considered to be much more susceptible than cattle and this is one of the main hurdles for farmers wanting to diversify into these lucrative niche markets.

This project will investigate how the disease can be controlled on farms in Wales.

Blood samples will be taken from bison/buffalo/cattle/sheep on each farm to test if they are, or have been exposed to OvHV-2.

Taking blood samples from other livestock on the farms e.g. sheep and deer, to test if they have been exposed to OvHV-2 will deepen our understanding of the risk they pose to in contact bison, buffalo, and cattle.

The blood, along with pooled faecal samples will also be tested to see whether the bison/buffalo have been exposed to other infectious disease or parasites that could potentially increase their risk of developing MCF.

A new vaccine against OvHV-2 will be used on the bison holding, known to have an MCF problem, to assess whether it is a practical option for controlling MCF on farms.

A disease control package will be formulated on the basis of the above results and tested for a further 12 months to assess its success on each farm.

Very little is known about MCF and if it can be controlled in the context of bison/buffalo farming. Hopefully this project will determine possible steps that farmers can take to control MCF, which is currently lacking within the niche sector. This should provide useful information for producers considering this as a diversification option and provide examples of control to help those at the start of the process.