Is buying bison better than beef? – Alternative livestock option for the UK

A bit of bison background

Bison are large ruminant mammals of which there are currently only two extant species remaining, Bison bison (The American bison) and Bison bonasus (The European bison). The American bison is far more numerous (300-500,000) than the European bison (7 -8,000) but both have previously been pushed to near extinction by widespread overhunting. Due to American bison having an increasingly prominent role in meat, hide, dairy and wool production, less than 10% of the total numbers are considered wild today with most being managed on farms. This is opposite to the case found with European bison where over two thirds are free-ranging often in national nature parks. Despite this, however, many have noted that the habitats in which European bison are managed require supplemental feed from humans which makes much of this “wild” population more akin to being farmed.

In Europe, it has been noted that European bison are often viewed as forest specialists in comparison to foragers like their American cousins, but many believe this to be an artefact of bison being forced to and maintained in forest habitats due to the threats they faced (overhunting). As such, in future allowing bison to range freely on land designated for rewilding purposes across Europe could be an option. The concept is that here they can play roles in ecological restoration of these lands as opposed to detrimental ecological impacts that had been observed in forest habitats. In the UK conservation and diversification is also underway for this species with an upcoming project to bring ranging bison to play roles in ecology and as an alternative revenue source through providing visitor tours. Whilst potentially sounding radical this idea has been proposed to be taken even further by introducing megaherbivores back into previous historic ranges across Europe including elephants for ecosystem control purposes.

American bison are known to grow heavier than their European equivalents, alongside their higher numbers, an increased ease of taming may be why they are far more commonly considered for roles in the meat production system. Bison are noted as being better adapted than cattle to utilising low-quality feeds which could act as a niche that this species can take advantage of from a UK perspective. American and Canadian bison farming is noted as being far simpler than equivalent cattle farming with a significantly hands-off management style. Bison cannot safely be helped during calving and have been shown to have very low calving mortality rates between 1-3% compared to equivalent US losses of 5 – 7% in cattle. Bison have metabolic adaptations to cold tolerance, with 6-month-old calves already being highly tolerant to <0°C temperatures (a tolerance not reached by many cow breeds until 12 – 16 months) and it is suggested that bison decrease their metabolic rate in winter. This could be highly beneficial to match decreasing feed availability in winter and help facilitate year-round pasture grazing compared to other farmed cattle species (which might require housing or supplemental feed). Bison function well as a single herd and are noted to be easy to move between pastures requiring far lower labour and coercion than cattle. Considering that bison are equal to if not higher in carcass weights and similar in calving frequency to cattle one of the only other major considerations for comparison is land and pasture demand. Based on US data it was shown that dependant on local forage it can be possible for bison numbers to meet current beef production levels and exceed them where forage availability is optimum. This gives high promise towards the role of utilising bison in the UK, particularly given that production benefits are no longer the be-all and end-all in farm-based decision making. 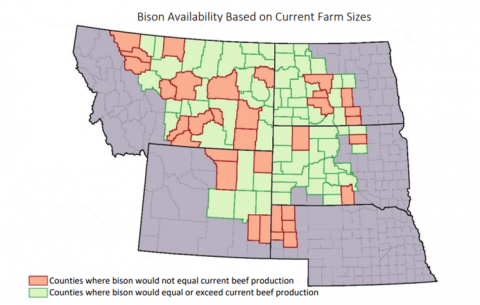 The meat of the matter

It is well documented that much of the world’s consumer population are becoming more diet conscious, demanding reduced ‘bad’ fat contents and increased health benefits from their foods. It has been noted that bison meat may be a healthier alternative to beef due to its differing nutrient contents, particularly lower fat (but higher ‘healthy’ polyunsaturated fatty acids) and cholesterol profiles. As such bison lean steaks are far more equivalent in calorie content to skinless chicken breasts than they are to equivalent beef cuts in many cases (see table below). Bison meat is noted as having a rich taste, dark colouration and is very lean only showing slight marbling.

To date in the UK, there are only a handful of farmers working with bison to produce food products. UK Prices (see table below) suggested for cuts of bison meat are far higher than equivalent supermarket values of beef cuts indicating the high value of this product, however, equivalent direct sale prices of quality beef in some instances match or exceed that of bison.

As stated previously, bison are far better at converting low-quality forage with minimal labour input so a direct comparison of gross profits considering all inputs and output could well change the comparison of beef and bison. In a US study, it was shown that bison farming is generally cheaper (despite the higher upfront cost of purchasing animals) than equivalent calf-cow operations and that overall profits could be as much as 12 times higher per head. Alongside this, bison have far longer breeding lifespans meaning lifelong production is higher than cattle.

So why aren’t bison more regularly farmed in the UK? Well aside from the need to grow the marketplace and awareness of the product, a major production bottleneck is the significant concern surrounding bison’s high susceptibility to malignant catarrhal fever (MCF). The symptoms of the disease include high fevers, loss of appetite and anorexia, blindness, high nasal discharges, heavy eye-watering, diarrhoea, and presence of blood in faeces and urine. MCF cannot be directly treated in infected animals and requires simple supportive care (fluids, antibiotics due to increase in bacterial susceptibility and anti-inflammatories) though the onset of symptoms is linked with very high mortality rates. The disease is caused by gammaherpesviruses the main two discussed being alcelaphineherpesvirus 1 (AlHV-1) and ovine herpesvirus 2 (OvHV-2). The disease can impact even-toed ungulates animals such as cattle, water buffalo, bison, deer, antelope, elk, and reindeer but also interestingly can impact pigs. The viral aspect of the disease remains present in the environment in host carriers which lack symptoms such as sheep, goats and wildebeest. The most infective period for sheep to be a risk from heavy viral cell shedding occurs when lambs are 6 – 9-months old. In spring lambing systems this is also a risk period as lower temperatures improve viral survival time. Whilst infection does occur in cattle, it has been noted that sheep to cattle infection pathways are far less common and often require very high viral doses, however, bison have been suggested to have a higher susceptibility to the sheep viral pathway. In one study it was shown that exposure of bison to sheep for a single day at auction lead to significant MCF outbreaks, and also backed up research findings that transmission from diseased bison to bison does not occur. There is, however, the potential for vertically transmitted disease (animal to offspring) as viral cells have been shown in the colostrum and through the placenta. Currently, vaccine trials are ongoing to protect economic losses not just of bison but also of cattle and buffalo in higher risk areas with some significant efficacies being demonstrated. Vaccines of the OvHV-2 variety of MCF, which would be the risk to bison in the UK, have also been assessed and a promising candidate is even undergoing further evaluation as part of a European Innovation Partnership (EIP) project running in Wales. This project looks to assess both the vaccine efficacy and also other strategies for controlling MCF to open up new diverse meat production avenues such as bison, buffalo and elk more safely.

Control strategies based on the above knowledge include:

Whilst bison farming has many potential benefits as a new niche market for the UK it also comes with other considerations. Bison are amongst the largest ‘livestock’ animals and can be dangerous, with higher numbers of human injuries due to bison being documented than any other animal in the Yellowstone national park in the US. As such it is vital that well-informed safety training and procedures are developed and provided to farmers, despite this it is only as recently as 2015 that studies into what specific health and safety considerations are needed for individuals handling bison were published. This has led to informed bison handler documents being created and regular meetings surrounding bison worker safety being undertaken in the US. One of the biggest risks and labour-intensive times associated with farming bison is during the period of slaughter. During this period animals need collecting for transport to slaughter facilities and during this stress and injuries to both animals and humans can occur. Due to bison’s thicker skull than cattle, it is common in both the US and the UK that animals are shot on site by trained riflemen as a method of slaughter and in some instances, it can be more humane and safer to perform this on-farm before transporting carcasses. Equally, before bison farming could become more widespread in the UK specific slaughterhouse modifications/considerations would likely be required to facilitate machinery which is fit for the purpose of processing and dressing these animals. 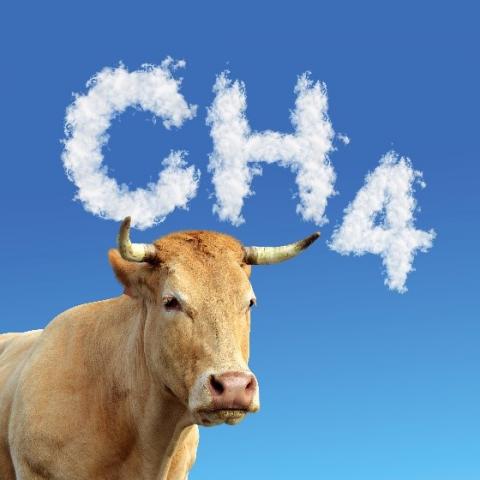 Beneficially, however, bison are noted to produce around 1/3rd less methane a year than cattle demonstrating a promising mitigation potential of switching some production from cattle to bison. Based on study figures this could act as a reduction in CO2 equivalent, per year per cow replaced with bison, of 3.69 tons with the typical emissions of the average car being 4.6 metric tons, so each conversion is almost equivalent to removing a car from the road for the year.

Finally, bison are known to have issues surrounding copper deficiency which can lead to animal wasting and other negative effects. As such nutritional considerations will need to carefully consider balancing copper levels to avoid the health risk of under or overdosing animals with feed supplements. As well as this bison farmers must consider all the same issues surrounding cattle farming including gastrointestinal, liver and lung parasites, bovine tuberculosis and bovine respiratory disease for example.

Bison farming shows promise as a way of managing ecosystems whilst simultaneously producing healthier and more environmentally friendly red meat alternative products. Whilst there are several considerations surrounding infrastructure development that would require consideration for an expansive UK-wide production system of bison, an initial key concern revolves around diseases. MCF is a significant risk to any bison population wishing to be introduced into the UK due to their high susceptibility to causative viruses. Even more so in Wales where the main disease reservoir host species, sheep, are far more numerous and densely populated. However, disease risk should be minimal if biosecurity measures are maintained to high standards and location of bison herds can avoid being within 5km of sheep holdings if possible, with risks significantly increasing if farms are within 1 km. For bison to succeed as a new food product marketing must be approached effectively, but alternative economic benefits (whilst the species remains niche) may be achieved through providing farm tours to view animals at pasture.