To improve the sustainability of goat meat production in Wales by investigating the efficacy of recommended wormer dose rates for meat goats. 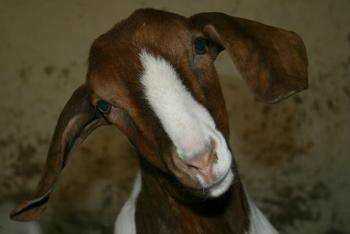 Anthelmintic resistance has been a growing issue for several years and has a significant impact on the sustainability of both goat and sheep meat production. Sheep and goats are both hosts to the same gastrointestinal (GI) parasites. At present, there isn’t a published dose rate for anthelmintic treatment of goats and instead, it is assumed to be similar to that of a cattle and sheep. However, the ability of the goat species to metabolise toxins quicker than sheep and possibly cows, could potentially promote anthelmintic resistance within goat herds, leading to a reduced effectiveness of the wormer drugs across the species.

Four goat farmers located across mid and south Wales have come together in this two year project to establish a technical solution to the lack of clarity around the correct dose rate suitable for goats. This will be measured using FEC (Faecal Egg Count) testing before the wormers are administered at different times of year, and should the wormer be required, FEC testing post drench after the advised interval.

This should provide an indication as to a ‘best practice’ worming routine and establish a more effective dose rate and regime for worming meat goats which can be shared with the industry. A more effective dosing regime can improve the daily live weight gain of the animal and therefore reduce the time to slaughter. If goat meat consumption becomes more of a mainstream product, it is possible that further livestock health care scheme may evolve.