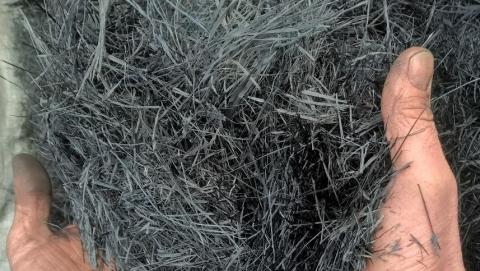 Biochar is produced through the process of pyrolysis that heats biomass with limited amounts of oxygen present. The resulting Biochar can be as high as 78% carbon as well as having small amounts of Hydrogen, Oxygen, Nitrogen, Sulphur, Phosphorus, Potassium, Calcium and other mineral elements.

Biochar can be produced from a wide range of source materials. However the use of Molinia for this purpose has not been widely researched. The Cambrian mountains have large areas of Molinia; a perennial deciduous grass species and mostly grows on damp, acid or peaty soil. Livestock do eat Molinia in its early growth but later in the season it becomes unpalatable for sheep, although cattle will still graze it. In the autumn it completely sheds its leaves. The build-up of this grass has a negative impact on species diversity and habitat as well as decreasing the agricultural productivity of the land, reducing access for recreation, and increasing fire risk.

Sheep’s tail wool has little use or value however, when it decomposes it acts as a source of slow release nitrogen, along with other key trace elements such as potassium, phosphorus and iron. This makes tail wool ideal for composting due to the extra nitrogen in the dirt and faeces.

In this two year project running from October 2020 to June 2022 four experienced farmers/horticultural growers from across mid and south Wales will be trialling two different soil amendments to establish their effects on yield and quality of several vegetable crops.

Key benefits of the project may include: