Maestanyglwyden has lambed the majority of their ewes by now, and overall, lambing has gone well.
The major problem seen in previous years has been mastitis within the ewes, with 10-13% of ewes culled due to mastitis, with a further 2-3% ewe deaths due to severe mastitis.

This year, a project has been in place to try and tackle the mastitis issues seen on the farm. This year half of the twin bearing ewes received a mastitis vaccine against Staph. aureus, which is a contagious bacteria found in the environment. 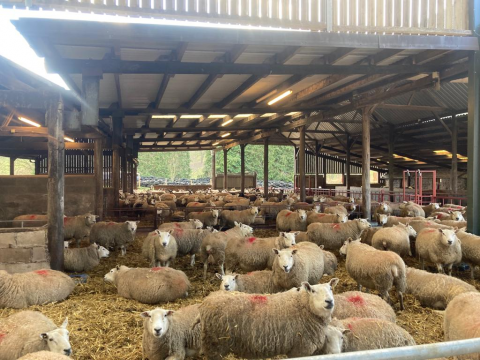 This bacteria is one of the causes of mastitis in sheep and remains in a flock through ‘carrier’ sheep which shed the bacteria into the lambing shed from their udders.

This year some of the ewes were vaccinated 5 and 2 weeks prior to lambing to help ‘boost’ their immune response against Staph. aureus which they could be challenged by within the lambing sheds, to see if this could help reduce the levels of mastitis seen in the flock.

The ewes this year were in better condition before lambing, and on this farm that means slightly leaner, averaging BCS 3-3.5/5. Having the ewes in better condition could have contributed to improved health of the ewes and perhaps a better immune response against bacteria found on farm.

So far this spring, there has been 6 ewes with mastitis. Three cultures have been sent off, revealing that Staph aureus is still a problem bacteria found on the farm. Out of the 6 ewes so far, there have been no deaths, 3 have been culled and 3 recovered/had milder signs and haven’t lost the quarter, which could be as a result of protection from vaccination.

Maestanyglwyden also has continued to feed the ewes once outside at a high rate (hay fed to appetite and concentrates fed ~1lb/head), to eliminate any nutritional problems which could have been contributing to the high rate of mastitis. With the grass growing now, the concentrates fed will be continually reduced and the sheep are no longer eating the offered hay. 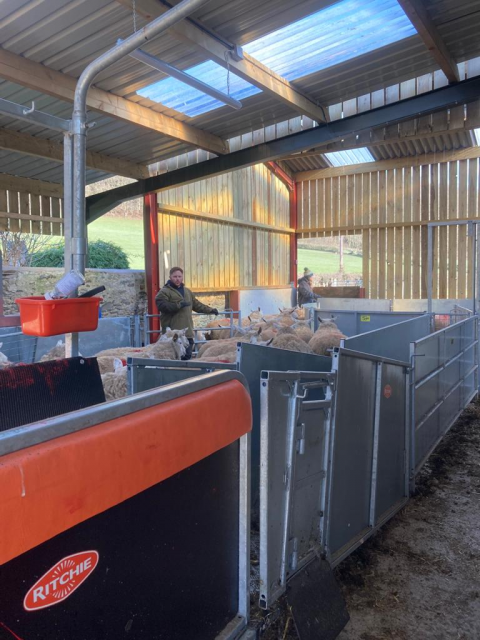 This data was gathered whilst the ewes were already being handled through the combi-clamp, to avoid unnecessary multiple handlings. They were vaccinated as they received a flukicide drench (targeted middle-to-adult fluke, Closantel) and being dagged pre-lambing.

Further sheep data is continually being collected – any ewes with clinical signs of mastitis have their ear tag recorded, BCS, and a milk sample taken if possible. This allows comparison between ewe BCS pre-lambing and at point of getting mastitis, whether the ewe had received a vaccination against mastitis and milk samples are sent off to culture/identify the bacteria causing the mastitis.

The rain fall and temperature loggers are still on farm – one set is situated near to and in the lambing shed, and the other set are up the field.

The rain fall peaked on the week 10th-17th March, and the temperatures outside have ranged from minus 4.1oC to plus 22.4oC. The variation in temperature, alongside rainfall, will be analysed at the end of the project, to see if the mastitis cases seen were around the time of the highest rainfall or the most varying temperatures etc.

The project is still on-going, and we hope that the mastitis levels remain low through until weaning.