Switzerland is not a member of the EU but its farmers trade with the member states in line with European Free Trade Association - EFTA regulations.

Switzerland holds around 130 contracts allowing the country to trade with the EU, which were put in place over a number of years.

Within 18 months, Welsh farmers will no longer live in a country that belongs to the EU, and the aim of the farmers’ three day visit to Switzerland is to see whether it would be beneficial to have similar contracts between countries in the UK and the EU after Brexit.

During the visit, farmers will meet with Welsh people who live and work in Switzerland, visit farms and have an opportunity to meet with a representative from the Federal Office for Agriculture.

Traditionally, Switzerland has heavily subsided farmers – according to OECD figures, around 55% of Swiss farmers’ income stems from state subsidies.

In countries that are current members of the European Union, the corresponding percentage is around 20%.

Subsidies in Switzerland are also amongst the most generous in the world – according to some reports, they can be worth around £2,000 per hectare.

Generally, Swiss farms are small in comparison to farms in Britain – a farm in Switzerland is 23 hectares on average, around 48 hectares in Wales and even larger in England and Scotland. 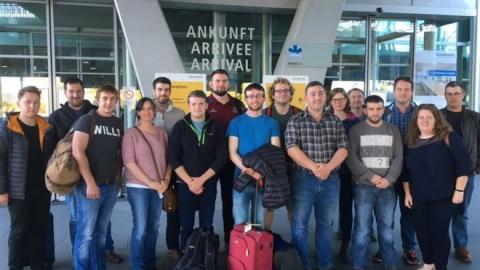 The 14 farmers taking part in the study visit are part of the Agri Academy – a scheme aiming to inspire the next generation of farmers and rural innovators, which has been running for five years.

Geraint Hughes, leader of the Agri Academy and one of the organisers of the study visit, said: “We have a group of progressive farmers taking part in this visit to Switzerland, aiming to learn about better ways of running farms by networking with farmers from other areas of Britain and Europe.

"Members of the academy visit foreign countries each year and we have chosen Switzerland this year in light of Brexit.

"We want to see how businesses are run as well as Switzerland’s status in Europe – and how this affects farmers on the ground.

"It appears that agriculture is well supported by the Swiss government and as a result, many farms are able to run as small, family run farms.”

Change on the horizon?

But it appears that a change is on the horizon with Federal Office of Statistics figures showing a decline in the number of smaller farms in Switzerland, with small scale farmers complaining that the new subsidy arrangements favour larger farms.

Welsh farmers will no doubt learn new things during their visit to Switzerland, but some of the experiences of their co-farmers will sound familiar.