A farm-based community bakery in Pembrokeshire is experimenting with producing bread from a range of ancient grains and heritage wheat varieties.

These species of wheat can be tricky to grow but a European Innovation Partnership (EIP) Wales study is trialling agronomic practices to identify the most appropriate methods for their production.

Some are already being grown in Pembrokeshire.

Rupert Dunn grows around 10 hectares a year of several varieties, including a wheat population originating from France.

These are being grown at Brawdy Farm, near Newgale and at the Bug Farm near St David’s.

Other farmers in the area, including Gerald Miles at Caerhys Organic Farm near St Davids, have also been growing crops of Emmer and Einkorn.

Rupert and Gabriel Landi and Emily Roope, his team of bakers at the community bakery, Torth y Tir, at Brawdy Farm, are testing the baking quality, taste and texture of these varieties in flour milled from grain grown in other regions.

Gabriel says that as the quantity and quality of gluten in heritage varieties is lower than that of modern wheat, the final proving stage in the bread making process is quicker.

The temperature of the water used in the dough must also be cooler and the fermentation period shorter, he adds.

Innovation Broker for the EIP project Tony Little said carrying out research into the effects of different seed rates and of under sowing will give a better understanding of the agronomy and economics of growing the crops.

The trial crops include spring and autumn sown varieties such as April Bearded, Einkorn and Hen Gymro, which translates to Old Welshman.

Each variety has been trialled at different seed rates, with or without clover undersown.

Preliminary findings for the first set of spring sown varieties show that yields of non-undersown crops grown in the organic system are generally comparable but slightly lower when undersown. Yields are higher for the varieties April Bearded and Mulika when undersown and comparable for Einkorn in the conventional farm system.

Protein was slightly higher in the organic-grown undersown crop but generally reduced by undersowing in the conventional farm system.

Seed rate had little effect on crop yield and protein content across varieties and farm systems. 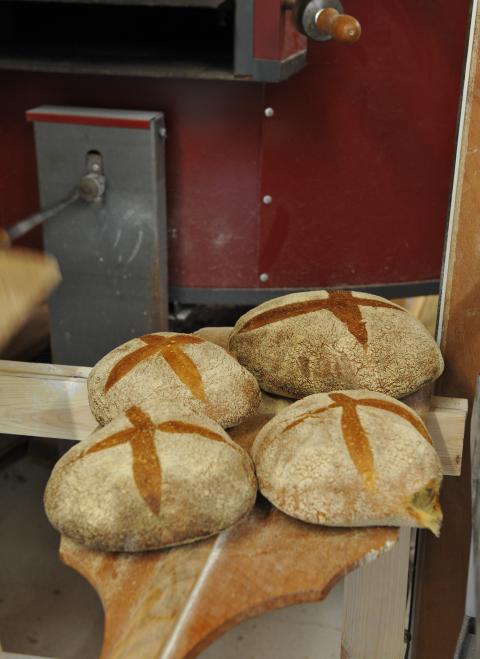 By trialling varieties and growing those more suited to local conditions, fewer inputs are needed and soil structure is improved, whilst also potentially lowering the carbon footprint of the crop says Mr Dunn.

“Nutritional quality is generally shown to be higher because they are not being grown specifically for yield.’’

A cross pollination rate of 3-5% between varieties also results in new species of grain that thrive in local conditions.

The project is also trialling broad beans as a green manure: these are being grown with the wheat to fix nitrogen in the soil and smother weeds populations.