Focus on a sheep discussion group from North Wales

Improving the efficiency of the ewe is the key goal for this discussion group, mainly by reducing cost and maximizing output. Group members collected both physical and financial data from the outset. The more data collected, the more they can compare and benchmark against each other’s farms and identify any weaknesses or opportunities for improvements.

The group’s current focus is on reducing lambing losses. Improving animal performance and reducing physical losses is key to ensuring sheep farming is profitable and members hope to reduce the difference between their scanning percentage and finishing percentage. Looking back at 2014/2015 results, the main concern was that lambing losses varied between 8% and 23% from scanning through to selling.

With many losses not seen, such as aborted ewes, it was decided to record the losses for lambing 2016. The first step was to look and analyse farm records to understand where the main issues were and be able to plan ahead to reduce problems in the following year. The group were given data collection sheets to record their losses, noting when and how death occurred.

Results were recorded for cross bred ewes, welsh ewes and ewe lambs and they clearly show that losses vary depending on the animal therefore demonstrating the importance of gathering as much data as possible. Results were as follows: 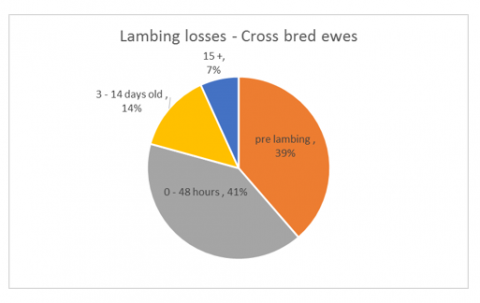 i) Cross bred ewes showed 80% of the losses occurred pre-lambing and within the first 48 hours. 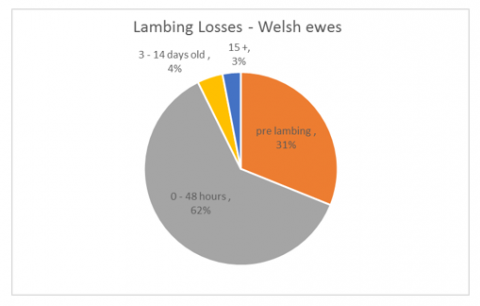 ii) Welsh ewes lost 62% of their lambs within the first 48 hours. Lambing outdoors had a significant effect on lamb survival. 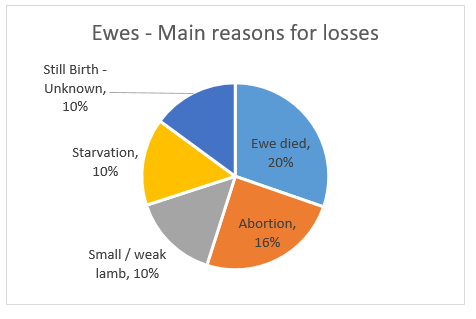 iii) The cause of death was also recorded. Results showed that 20% of losses was due to the death of the ewe. This led to further research, including post mortem and blood sampling. The second highest reason for losses was abortion at 16%. Both of these losses are losses that aren’t often recorded or counted as actual lambs aren’t born. As a result, 36% of lambs are already lost before the start of actual lambing. Further to investigation, many have opted to give treatment on abortion to reduce this high number of lamb losses. 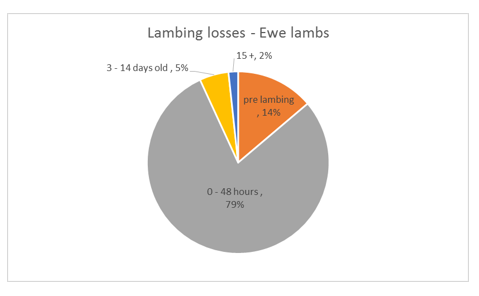 i) More and more have opted to lamb ewe lambs as many are keeping their own replacements. This is seen as a financial benefit if done correctly. With the majority of lambs lost during the first 48 hours (79%), it was important to track the reasons for these losses to forward plan for the following year. 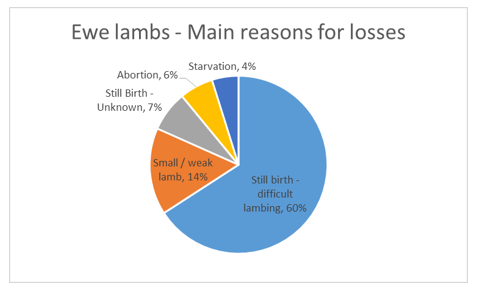 ii) Results showed that 60% of lambs were lost due to difficult lambing and a further 15% due to weak lambs. This raised concerns over ewe nutrition and the need for effective nutrition planning pre-lambing. Also, the breed of rams used were discussed leading some to change the breed of their rams used on ewe lambs.

Following data collection, many have made significant changes to the management of their ewes and ewe lambs and will continue to monitor losses during lambing 2017, hopefully reducing their lambing losses.