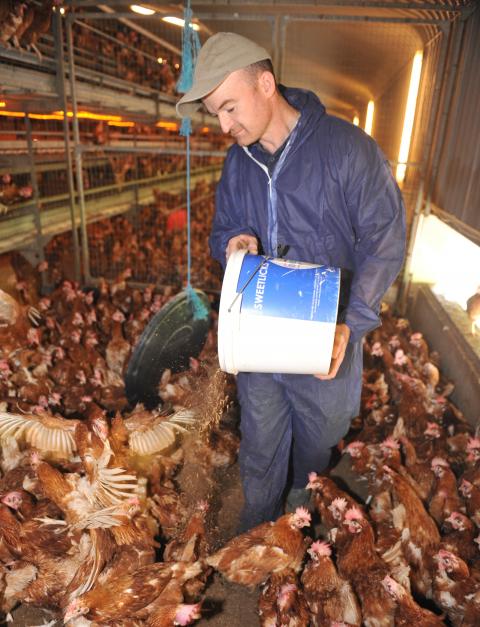 Adding non-infective bacteria to the environment of poultry sheds to dry out litter and reduce ammonia levels has the potential to help farms meet the challenges of new Water Resources (Control of Agricultural Pollution) (Wales) regulations, a trial at a Powys free range egg farm has shown.

The Williams family, who farm at Wern, a Farming Connect demonstration site at Y Foel, near Welshpool, have been trialling a new approach to optimising the environment in their two 16,000-hen multi-tiered sheds.

This has resulted in reduction in the frequency that muck needs to be cleaned from the manure belts, from every three days to once a fortnight, and hens are dealing with red mite challenges naturally by maintaining high health.

Mortality rate has decreased, to 2.7 per cent from the 3.7 per cent recorded at week 59 in the previous cycle, and there has been no requirement for the use of antibiotics.

At a recent Farming Connect open day at the farm, Aled Davies, of Pruex, said the objective of the trial had been to determine what variations optimised the environment of housing.

“What we have learned is the peril of wet areas in the building because these cause humidity, which is a significant factor in the production of ammonia from chicken litter,’’ said Mr Davies.

Ammonia is generated by bacteria in chicken litter converting uric acid into ammonia.

By introducing non-infective bacteria similar to soil, in the form of Pruex stabiliser, into the shed, water vapour is produced and the litter dries out.

At Wern, this effect is apparent from a significant reduction in the build-up of muck on manure belts.

“We are able to hold chicken muck on the belts for two weeks rather than three days,’’ said Osian Williams, who farms with his parents, Dafydd and Eleri, and his partner, Nikki.

Before the trial, the litter had been 70% moisture and the weight of this on the manure belt meant it needed to be cleared frequently.

Over the duration of the project, Pruex have been able to reduce moisture in the litter on the belts by over 50% of the original levels, said Mr Williams.

“If we left it more than three days it reached very high levels of ammonia but, because it is now releasing water vapour, we can have it sat on there for two weeks.’’

Labour requirement for this job has been reduced by more than three quarters and ammonia levels are low.

Mr Davies said because the litter is now much drier and its storage requirement is less, it can help farmers meet the new regulations.

“A lot of the challenges that farmers are concerned about with regard to the new regulations are mitigated here at Wern,’’ said Mr Davies.

The atmosphere in the sheds has also improved - ammonia levels have reduced by 75% in the warmer summer months, from 20 parts per million to 5.

This can only be good for egg production, Mr Davies added. “Egg production is optimised while ensuring dry bedding, clean air and safe water.’’

The project at Wern is still ongoing and Farming Connect will be sharing more results and findings as the project progresses. If pop holes remain open over the winter period this year, it’ll be interesting to see a comparison between the moisture levels in the shed this year compared to last year. For more information about the project please click here.