Tapping into new genetic technology has great potential to improve the productivity and profitability of beef businesses through better-informed breeding decisions. Genomic Estimated Breeding Values (GEBV’s) use DNA technology to identify superior genetics for carcase traits, which could have a significant impact for both pedigree and commercial producers. 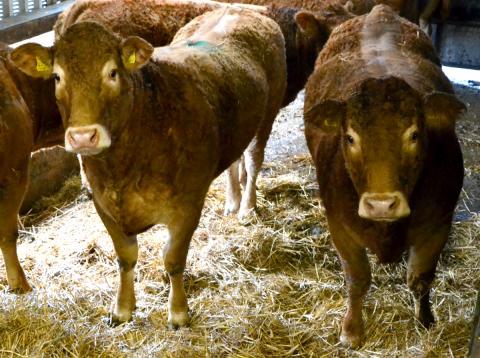 GEBV’s for carcase traits have been available for the Limousin breed for a year and are calculated differently from conventional Estimated Breeding Values (EBV’s) which are based on measured performance on-farm and information from other contemporary animals. GEBV’s use pedigree and BCMS records, performance data, DNA testing and Video Imaging Analysis (VIA) measurements from abattoirs for six different carcase cuts. The VIA carcase data and DNA are combined to create a breed ‘SNP’ key and build a library of performance information. DNA samples from other live animals can then be compared against the library to identify traits for good performance.

“Genetics is the biggest untapped resource for herd improvement and one which has a fairly big impact on whether a herd is making a profit or not. GEBV’s are highly accurate and offer a very powerful source of information to create breeding values that can help breeders respond quickly to market change,” Alison Glasgow, Technical Manager for the British Limousin Cattle Society told farmers at a meeting at Pencraig, Trelech, Carmarthen, where some of the pedigree Reddragon herd have been DNA tested as part of a Farming Connect Focus Site project.

“Genetics doesn’t take away from the stockmanship and management that are also needed to produce good animals, but we’re trying to provide breeders with the tools to respond to any changes when the commercial market needs it.”

“When assessing which traits are important it depends on what you’re looking for, but days to slaughter and carcass weight are important economic factors in the herd. At an average cost of £1.80-£2 per animal per day, that’s a lot of money if the animal takes longer to finish,” added Alison.

At Pencraig, Thomas Price is now considering the best way to apply the new information gathered from DNA tests of 40 animals in the herd. He said: “Thanks to the testing we’ve done through a Farming Connect Focus Site project we now know the genetics of the cows and our bull, rather than just having an idea of how they might perform. Now it’s all about how we use the information to improve our herd.”

DNA testing can also provide information on myostatin – the gene responsible for double muscling. Natural mutations of the gene are less effective at controlling muscle development which leads to increased muscle mass. While this can be an advantage in terms of increased meat yield, feed efficiency and meat quality, double copies of some genes can lead to issues such as calving difficulties.

Alison added: “For all the advantages in having these genes they have to be managed. The issues associated with double copies of genes can compound very quickly just in one generation if you’re not thinking ahead about the type of stock bull that you’re going to use.”

The Myostatin status of his stock is an important aspect of DNA technology for Thomas. “In the future we will definitely be keeping an eye on the myostatin variants so that we don’t get any calving problems. It’s all down to where we go next on the daughters because we don’t want double copies of some variants,” he added.

It is hoped to develop GEBV’s for fertility traits, production traits such as feed efficiency and disease traits in the future.