The simpler the mix, the better a herbal ley performs, Welsh trial shows

A herbal ley incorporating fewer species has been found to perform better than a more diverse seed mix with 17 plant varieties, during a trial on a Farming Connect demonstration site.

Aled and Dylan Jones and their father, Emyr, have been growing multi-species leys rich in legumes and herbs to fatten lambs from their 1500-ewe flock at Fferm Rhiwaedog, Bala.

One of the mixes they sowed at a rate of 15kg/acre, was made up of 20% ryegrass and 10% timothy, with red and white clover, chicory and plantain making up the rest of the mix. It provided two cuts of silage and grazing for lambs in 2022.

The second ley had just 4% ryegrass, with 16 other species ranging from sanfoin and lucerne to chicory and plantain, and has been grazed.

Grassland expert Sheena Duller, who has been advising on the Farming Connect trial, said all the species had germinated in the very diverse ley, but some had quickly disappeared in the last 12 months, to be replaced by grasses and weeds, especially docks. Growth had also struggled mid-season. This is likely to be due to a combination of natural competition from what’s in the seedbank, grazing management over the first season and some species not liking the edaphic site conditions.

In contrast, the simpler mix had performed well, despite being cut twice. It has produced high-quality silage and highly productive aftermath for late-season lambs.

“Weed ingress 18 months after sowing is only a few per cent, with a few docks just starting to come in,’’ said Mrs Duller.

Red clover levels in that ley rose to over 30% of the sward with its second silage cut, and over 50% in the aftermath grazing.

This trial is following the pattern seen in other Farming Connect multi-species ley trials - the simpler the mix, the better it performs, Mrs Duller told farmers attending a recent Farming Connect open day at the farm.

“Essentially the very diverse leys haven’t seemed to persist well in the wetter climates with heavier textured soils as we observed at Moor Farm in Pembrokeshire, a previous Farming Connect demonstration site, and in the EIP project looking at the impact of herbal leys on the health and performance of grazing lambs.”

“A combination of early season stocking pressures with short rest periods and fairly heavy textured soils seems to reduce the persistence of many of the legumes and herbs,’’ she said.

“The message is, beware of overcomplicated mixes with a low percentage of ryegrass, unless you are happy with short-term swards – although this type of mixture may perform better with drier soils and a more tightly controlled rotational grazing system.’’

A multi-species ley can be productive for three to five years, with the right seed mix and management. Many of the forbs won’t last more than 3 years, such as chicory, plantain, salad burnet and sanfoin. For farmers considering growing multi-species leys, the trial had provided some important lessons in how they can get the best from these.

“There is such a huge range of multispecies leys available on the market – this was a useful project to see which plant species were best suited to a beef and sheep farm in upland Wales ’’ said Aled Jones.

Among the key lessons learned are the importance of early establishment – sow in May or June, and beware of sowing too deeply. “Some of the seeds are very small; therefore, they only need very shallow sowing, no deeper than 10mm, and the seed-to-soil contact is important, so roll well,’’ advised Mrs Duller. 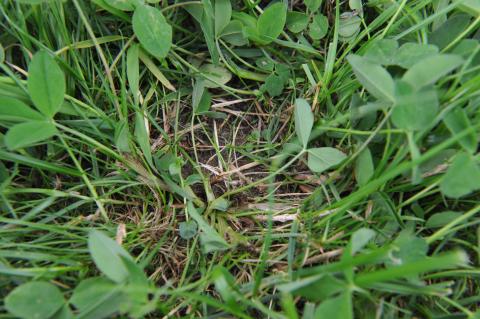 Weed control pre-sowing is crucial, as herbicides can’t be used on a mix of grasses and broad-leaves – for farmers who want a more natural approach to weed control, Mrs Duller advises growing root crops or brassicas beforehand.

The soil chemistry must be right – at a pH of around 6.3, with P and K indexes at 2. Giving the sward a winter break is important, as is carefully controlled grazing management.

“These leys are not designed for intensive grazing; it is too easy to damage them and lose some of the plant species,’’ said Mrs Duller.

Red clover, for example, will die if its crown is damaged – in contrast, white clover has a stolon, not a crown, and can withstand grazing better in more challenging conditions.

There are major benefits to be had from rotational grazing, but both under- and over-grazing should be avoided. Leave a minimum 7-10cm post-grazing residual, and allow for a recovery period of at least 30 days.

Multi species leys are a specialist crop and may require changes to management to ensure they grow and thrive. Here are some top tips to help you get it right –

Going forward, farm support scheme’s in Wales will provide payments for farmers to grow these diverse leys. Farming Connect red meat technical officer Lisa Roberts, who over-saw the trial at Fferm Rhiwaedog, said the project had shown that it is worth farmers experimenting with different mixes.

“Farmers need to consider what they want from the ley and how it will fit into their management system,’’ she said.

Farming Connect is delivered by Menter a Busnes and Lantra Wales and funded by the Welsh Government and the European Agricultural Fund for Rural Development.