Eifion Pughe was just 24 years old when he had the opportunity to farm in his own right, making it his mission to create an economically viable business fit to survive the challenges that lie ahead for Welsh family farms. 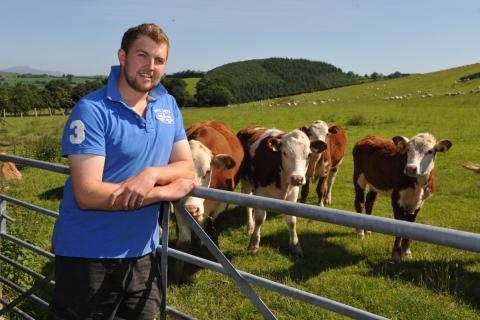 Eifion was brought up on his family’s 145-acre beef and sheep holding near Machynlleth. Tragedy struck when Eifion was just twelve; his father died and this led to his mother renting out some of the land.

After leaving school, Eifion worked for an agricultural contractor locally and also spent eight months working on farms in New Zealand. This period broadened his outlook and encouraged him to think about returning to the family farm.

He first proved his ability in his early twenties when his mother asked him to take responsibility for 20 acres, which he quickly stocked with 50 improved Welsh ewes.

The flock soon showed a healthy profit and it wasn’t long before his mother gave him the opportunity to farm a further 145 acres. He expanded the flock to 350 ewes and also ran a small herd of Hereford suckler cows.

Eifion’s desire to improve year-on-year performance required not only energy and initiative but business and technical excellence too. It was at that point he turned to Farming Connect.

“I was determined to take advantage of all the help and support available to me and Farming Connect proved the catalyst to moving the business forward, ’’ said Eifion, who is a former Agri-Academy participant, a  member of an Agrisgôp group, part of a Farming Connect discussion group, and a keen advocate of Farming Connect’s development and mentoring programme.

“Some of the land was under-performing so I applied for a Farming Connect Nutrient Management Plan and received 80% funding to sample my fields.”

The results were surprising. “I thought the land needed more lime but the pH levels in most of the fields were good so I would have been wasting my money,’’ Eifion recalls.

He discovered that a field in which he planned to grow 10 acres of swedes for winter forage as part of his Glastir Advanced agreement needed lime, potash and phosphate so, armed with this information, he applied those nutrients. The success of his first winter forage crop meant that Eifion was then able to out-winter the 12 in-calf Hereford heifers he had bought.

“Out-wintering was a definite cost saving. I didn’t have much silage because it was my first winter here but if I had housed the cattle I would have spent a lot of money on straw,” says Eifion.

Having recently witnessed the success of rotational grazing carried out at Farming Connect’s Aberbranddu demonstration site near Pumpsaint, he has now included this system in his five-year plan. And he is also growing a red clover ley as silage after hearing advice from sheep expert, Dr John Vipond, at another demonstration site event.

“If the results from the silage analysis are good, I will feed this to my ewes this winter and can significantly reduce the level of concentrate,’’ he says.

Eifion sold his suckler herd because it wasn’t financially viable and was keen to investigate other streams of income; he also wanted to make good use of a cattle shed which was standing empty.

He contract-rears dairy-bred beef calves to a minimum of 120kg for Dunbia through the company’s ‘dairy calf to beef’ scheme. Once he has finished rearing the current batch of animals, Eifion plans to refill the empty shed with his own calves, which he will sell through the Dunbia YFC Integrated Beef Scheme.

“Meilir soon saw the potential for increasing profits and explained that by improving performance by 0.1kg daily liveweight gain a day through monitoring feed intake, I could improve my return by £10 a head.”

Eifion is also in a Farming Connect discussion group for sheep farmers.

“I had been adding soya to the mix of barley, oats, peas and beans I was feeding the sheep but it was suggested at the group that I switched from soya to Dietary Undegradable Protein (DUP) because it is easier for the sheep to digest and is cheaper.  I’ve done this, it has been an excellent piece of advice.’’

Eifion says Farming Connect has introduced him to new networks, valuable guidance and many opportunities he would not otherwise have had.

“My long-term aim is to successfully run this business without being dependent on any subsidy. While the Basic Payment lasts, I would like it to be a bonus, not there to prop up my business.’’