A Welsh farming family who created a £2 million timber processing operation with guidance and support from Farming Connect say exciting opportunities exist in this sector for farmers seeking to generate a sustainable income for their businesses. 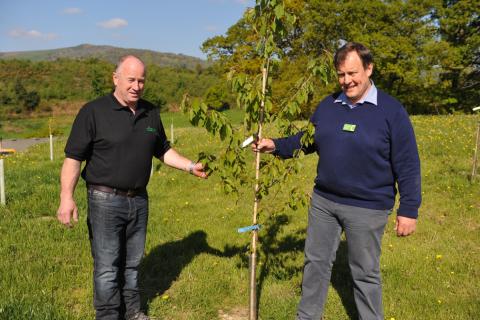 Huw and Sian Owen created Wood Energy Wales at Garthmyn Isaf, near Llanrwst, to secure the future of their family farm.

Seventy per cent of the land visible from the former sheep farm is forestry so when the couple were exploring diversification opportunities, biomass and woodchip production seemed an obvious choice.

They received guidance from Geraint Jones, Farming Connect Forestry Technical Officer, and created a business plan which was 80% funded by Farming Connect.

Mr Owen told visitors at a Farming Connect open day at Garthmyn Isaf that his initial research had identified an untapped niche for producing high quality woodchip. At that time, it was uncommon for woodchip suppliers to produce woodchip with a moisture content of under 35% whilst they aimed to produce a product at 20% moisture.

“I knew that if we could dry the woodchip to 20% there would be a market for it because the lower the moisture content the more efficiently a boiler will run,’’ Mr Owen recalled.

“In our business plan we predicted we would sell 500 tonnes in the first year but we actually sold 1500 tonnes and in the second year that grew to 4,000 tonnes, 2,500 more than we had expected.’’

Geraint Jones said it was evident from the outset that there was a ready supply of timber for the business coupled with a market demand for woodchip. 600,000 tonnes of wood has been processed since the business was created three and a half years ago.

“We knew there was a lot of under-managed woodland that needed thinning and that there were a number of biomass boilers being installed but with no consistent supply of woodchip. It was a race against time to get going.’’

Mr and Mrs Owen’s son, Carwyn, also works in the business and sources their timber from local Natural Resources Wales owned forestry and farms, processing it into woodchip for customers including a plant nursery, farms and a book storage warehouse.

“We make sure we buy all our timber from sustainable sources, it is vital that the wood we sell for fuel has been grown and harvested in the correct way,’’ said Mr Owen.

“In purchasing timber locally and using local contractors we have a very good relationship with clients. That, coupled with a new planting venture to secure future resource, contributes greatly to improving the economic and environmental performance of the business which in turn boosts the local economy.”

It can take between 9-18 months to season timber naturally but drying floors at Garthmyn Isaf force warm air through the woodchip to speed up the drying process.

Last year a Combined Heat & Power (CHP) plant was created at Garthmyn Isaf. This is powered by three tonnes of woodchip daily and has the capacity to produce 49kW of energy every hour, with around 30 kW of that energy sold to the National Grid.

Future business growth includes working with Farming Connect to research and trial the use of bi products from the production process of woodchip as bedding for cattle and horses.

Mr Owen said certification had aided sales growth because customers know they are getting a quality product.

“In getting the quality right we realised we needed to go with Woodsure and that has made a big difference to our sales.’’

Helen Bentley-Fox, director of Woodsure, a speaker at the Farming Connect open day, said that samples are taken to test for moisture content and chip size and to ensure there is no contamination. “Moisture content needs to be consistent for boilers to run efficiently.’’

Certification also provides a safety net for the supplier if a customer complains about quality. “We test the woodchip and if the quality is as it should be it provides the supplier with that evidence,’’ said Ms Bentley-Fox.

A tree felling licence is needed if more than five cubic metres of trees are felled in a calendar quarter – two cubic metres if the wood is to be sold commercially.

Visitors at the Farming Connect open day were advised that it will take up to three months for Natural Resources Wales to issue a licence but if all the information and maps required are supplied, a licence can be granted within 10 weeks.

Applications are sometimes refused if there are environmental and wildlife concerns, such as soil erosion or destruction of habitats.

Eighty-seven thousand broadleaf trees were planted on 34 hectares at Garthmyn Isaf this year with the support of a Welsh Government Woodland Creation Grant.

Mr Owen, who was assisted in the grant application process by Coed Cymru, said his ambition for the business had been for it to encompass the full circle of timber production.

“We wanted to provide a sustainable source of timber for the future,’’ he said.

He has planted a further 600 trees about the timber yard.

A new application window for the Woodland Creation Grant is expected to open in August 2017.