Drawing up a feed budget has allowed a Powys livestock farm to make decisions on winter feed early, before any potential deficits occur, in what has been a challenging growing year for farmers across Wales.

The simple calculation, based on the number of animals, their weight and predicted feed intakes, shows that Cefngwilgy Fawr has sufficient feed to carry its cattle and sheep through the winter without spending money on buying fodder or making additional silage.

The Farming Connect demonstration site near Llanidloes is farmed by Edward and Kate Jones and Edward’s father, Gareth.

In their Farming Connect role, they have been working with independent grassland specialist Chris Duller to look at opportunities to cut costs and improve livestock performance through what they grow on the farm. 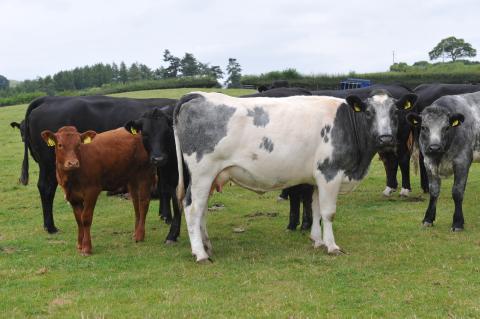 During a recent open day at Cefngwilgy Fawr, Mr Duller stressed how important a feed budget was to their farm, and to every farm. In a year when growing conditions had been difficult, he said that a forage budget allowed early decision making around potential deficits.

“In this year of all years, it is the time to do a basic feed budget,’’ he insisted.

Mr Duller calculates that their combined feed requirement is 254,000kgDM, factoring in the size, condition score and housing date of the stock.

He advised farmers to make allowances for wastage and, if concentrates are to be fed, to include that in the budget – 1kg of concentrates is equivalent to 1.4kgDM silage, depending on quality.

“Of all the years to get silage tested early, this is the one to do it,’’ said Mr Duller.

“Silage is likely to be drier than normal, which will mean it will be higher in DM, but the downside to that is that animals will eat more of it.’’

He also advised farmers to bear in mind that silage bales vary greatly in weight, from 450-650kg, so weighing is recommended if possible.

Wastage must also be taken into account. Mr Duller says research demonstrates that this can be as high as 25% in clamp silage, as a result of fermentation, feeding out and field losses, and 5-10% in bales; if conditions are wet, there can easily be losses of 30% from grazing a forage crop.

If a forage budget flags up a deficit, by planning early, farmers can make decisions around how to deal with that shortfall, such as sowing forage crops or grass reseeds, making additional cuts of silage, wintering off-farm or buying in forage.

“Making baled silage costs around 20p per kg of DM, compared to grazing grass at 7-8p/kg/DM, so if the feed budget shows you don’t need more silage, then you don’t need to spend that money,’’ said Mr Duller.

He advised that there was still time to sow stubble turnips or reseed with an Italian ley, to shorten the housing period.

As well as reintroducing swedes into the rotation, the Jones family have also been increasing the amount of protein they produce, by growing 2.4 hectares (ha) of red clover and also stitching white clover into their grass leys.

“The lambs have performed well on the clover, and it has saved us money on fertiliser,’’ said Edward.

All lambs are finished on forage (a requirement of their supply contract), achieving an average of 20.2kg deadweight at mostly E and U grades.

Through their work with Farming Connect, they have also been investigating the response rate from different nitrogen (N) application rates – 30kg, 50kg and 70kg/ha applied in a single dressing in late April.

The plot where 30kg was applied produced a response rate of 20kgDM for every 1kg of N applied, but all the extra growth was concentrated in the first four weeks, said Mr Duller.

The response rate was matched by the 50kg rate, but in that plot, the additional grass growth continued into the following month. The high rate of 70kg didn’t produce any benefit above the 50kg rate, either in grass yield or a longer response time.

Mr Duller said that historically, the advice had been to split fertiliser applications to give an even response and improve efficiency. However, recent research work in Scotland had found no benefit in split dressings.

“This small trial at Cefngwilgy has mirrored those research findings, saving on time and diesel by applying one dressing rather than two – and having a very similar nitrogen use efficiency from the 30kg and 50kg rates,’’ he said.

Lisa Roberts, Farming Connect Red Meat Technical Officer, has been overseeing the project work at Cefngwilgy Fawr. She said the actions taken by the Joneses had shown how simple measures can improve grassland efficiency and increase a farm’s sustainability.

“With fertiliser prices at record highs, it is important to look at alternative options like including more clover in leys to fix nitrogen,’’ she added.

Farming Connect is delivered by Menter a Busnes and Lantra Wales, and funded by the Welsh Government and the European Agricultural Fund for Rural Development.