Can clover cut carbon: Legumes and nitrogen use on farms

As farmers work to reduce their carbon footprint one strategy that is often talked about is the reduction and targeting of fertiliser use often in combination with legume planting. Balancing the available nitrogen (N) in agricultural soils with the profoundly damaging pollution it causes is of high importance. N can have detrimental environmental effects in agriculture via the use of N fertilisers, their production and application, with both organic fertilisers (slurry and farmyard manure) and synthetic N fertilisers producing GHGs mostly in the form of nitrous oxide (N2O). This accounts for 60 - 70% of the global N2O emissions annually. Alongside N2O, pollutants such as ammonia, nitrates and nitrogen monoxide are also produced and have varying impacts, including polluting of air, soils and waterways via leaching. Whilst a basic understanding of these factors may suggest simply reducing N fertilisers to be a route towards improving your carbon footprint, the reality is far more complicated. Legumes offer an attractive strategy as their incorporation fixes atmospheric nitrogen which may provide several merits but may also carry some uncertainties in their use. 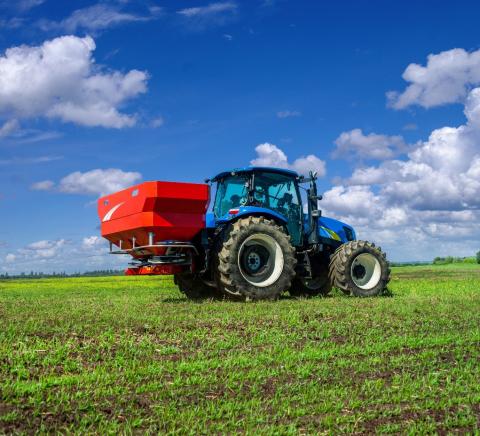 Nitrogen fertiliser use and N in soils

The major historic shift in agricultural production levels to meet increasing product demands has been achieved through the synthesis of inorganic chemicals to be supplied as fertilisers. This breakthrough allowed far higher crop and pasture yields allowing higher production values to be achieved on smaller parcels of land. This effectively increased productivity per hectare, reducing the need for land-use change alongside providing enhanced crop carbon dioxide (CO2)uptake from the atmosphere. Unfortunately, fertilisers also cause detrimental releases of N2O and CO2 during production and transport. As such the use of fertilisers requires careful consideration as simply reducing usage can impact the positive benefits associated with higher yields. Since 1982, however, fertiliser use has decreased significantly, demonstrating a 30% reduction and as of 2015, application to grassland had more than halved. This seemingly links with a reduction in CO2 across agriculture from 1990 – 2018 of approximately 13% and an N2O reduction of approximately 17% but cannot be deemed to be directly linked. If the relationship between N fertiliser application and GHGs emitted was linear (more fertiliser = more N2O) this would explain a significant proportion of the observed GHG reductions, however, research suggests that soils have a level of tolerance for N, where going over certain thresholds leads to greater N2O emissions. A US study suggested that until N application reached a certain threshold (in this case 134 kg/ha-1), N2O levels were not different, however, after this threshold was exceeded a sharp increase in N2O was observed. Simultaneously, their yields of maize were improved upon application of 33 kg/ha-1less N fertiliser suggesting that in some systems usage can be reduced without impacting yield. In certain systems, optimum N inputs can be determined compared to yield-scaled N2O emissions which could be a beneficial management strategy incorporating well with farm emission recording/testing as this becomes more common. However, soil nitrogen levels in general and associated emissions are subject to change due to environmental conditions, N formulation applied and soil drainage/texture/microbiome characteristics. Thus, this is highly complex. 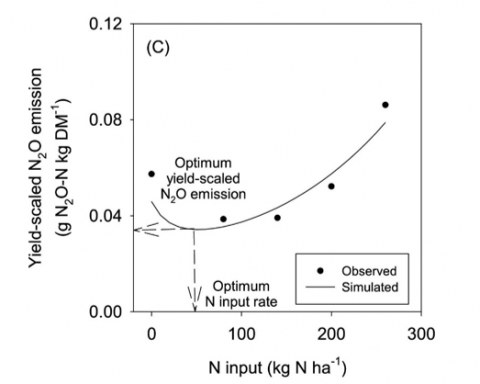 Another complication in on farm calculation of carbon footprint and N use is the significant variability in N utilisation requiring case-by-case assessments of farms. In a study across 5 diverse UK grassland areas, when each area utilised a set N input level (320 kg N ha-1), some saw surplus N levels in soils (causing a greater risk of increased emissions and pollution) which exceeded the EU nitrogen panel's proposed 80 kg N ha-1. This study also indicated that certain fertilisers emit more or less depending on geographic regions and geological make up. A fertiliser supplementation which may be promising is incorporating nitrification inhibitors such as dicyandiamide (DCD) as these directly impact the soil bacteria’s ability to convert N. The types of land where fertilisers are applied can equally impact N utilisation and GHG emissions. In a study under the Glastir schemes advice, grassland, arable and forestry in Wales were compared. This modelling study predicted GHG balances across the country using various assumptions and found that grasslands produced the most GHGs in the form of N2O, whilst storing a very small amount of carbon (C) and methane (CH4), followed by arable land. Forests acted as a sink or offset for all types of GHG investigated. This supports evidence for Glastir providing funding for increased woodland creation and riparian buffer zones management. A 20% reduction in N fertiliser was suggested only to produce a 7% reduction in estimated GHG production, whilst a 40% reduction resulted in a 25% reduction in GHGs. This demonstrates the non-linear tendency of N emissions, the importance of knowing your soil and crop needs and even the characteristics of individual fields can all factor into this. 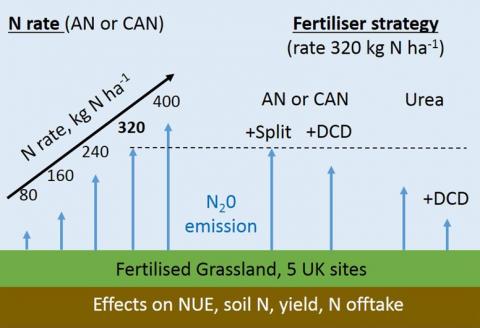 Another key consideration in any changes made to N fertiliser use, and therefore potential yields, is providing produce for a growing population. A UK study focused on this aspect and quantified the land-use change required to make up for production losses occurring with reduced N fertilisation. In their findings looking at wheat fertilisation, it was shown that reducing fertilisers by 83% per ha reduced direct GHG emissions by 28% but, also, reduced yields by 3.22 tonnes per ha. To make up for losses in yield a significant level of land use change was required which in turn increased emissions of CO2 due to converting grasslands to wheat fields. It was found that implementing the lowest possible N kg/ha-1 to prevent land-use change actually gave rise to higher emissions than were observed with 30% higher N applications (based on emissions split across the produce produced).

Overall, it is clear to see how complex N levels in agriculture are, and how case-specific these can be. But what does this all mean for farmers?

Farmers need to consider more than simply reducing the total amount of fertiliser being applied to their land, as this may not have an optimal effect on GHG emissions. Instead, utilising new advice and technologies which can assist in improving the targeted application of fertilisers, where and when they are needed, may offer improved GHG reduction when factoring in the improvements of production levels achieved (less kg of N fertiliser per Kg of produce). Nitrogen input planning is already a requirement in nitrate vulnerable zones, but these practices should be encouraged across all farming zones to provide more robust data collection as well as ensuring best practice. Equally, sourcing more sustainable fertilisers, looking at lower impact application methods and becoming more self-sufficient on-farm at providing your own fertilisers could be combined with other strategies to further reduce GHG outputs. Other areas which may be of importance in agricultural use of N are in utilising newer crop mixes,  specifically genetically improved crops with better nitrogen use efficiency (NUE) to reduce fertiliser requirements without the loss in yield. The discussions surrounding gene editing in plants by DEFRA as we move away from EU restrictions may assist in facilitating this. Another strategy for reducing the fertiliser requirements of land may be the incorporation of legumes thanks to their ability to produce “their own” N alongside high nutrition values.

Legume incorporation into swards is something that has seen increasing utilisation in agriculture alongside general increases in sward diversity encouraged under agricultural environmental schemes and in the proposed ‘Sustainable Farming Scheme’ moving forwards. Current schemes offer financial incentives to relevant farms to improve biodiversity and reduce GHG outputs via reduced fertiliser needs. Legumes act through their interaction with rhizobium bacterial species to increase N fixation and provide plants with usable N in exchange for a carbon and energy source from the plant. As such, incorporation of periodic legume species on agricultural land or long-term incorporation within swards should increase soil N levels and reduce N fertiliser requirements. However, this is not as straight forwards as it may first appear. Some studies suggest that less than 30% of legume N  is taken up by crops, whilst some of this free N may bolster the soil N availability long term, it is also then present to be converted to the GHG N2O via soil microbes, though certain studies state this value is negligible. Remaining free N in soils can also have indirect impacts on the environment via ammonia (NH3)production and nitrate leaching.

Currently, research into N fixation and utilisation levels by plants give a wide range of figures from 100 to 500+ kg of N fixation per year with incorporation into plants being variable based on the grass/crop species mix. This makes advising farmers difficult and case-specific. Due to these large ranges, determining the specific effects of legumes on GHG emissions are also challenging. Across Europe, the arable area growing grain legumes is below 2% even though such crops can be used as a high protein feed supplement for livestock, of which currently 70% of the EU’s requirement is sourced from overseas. Legumes have also demonstrated the ability to reduce animal methane outputs for the equivalent levels of protein they provide providing an indirect GHG reductive impact. Furthermore, legumes may play a role in reducing  air pollution which is becoming an increasingly important issue globally. Despite this, however, recent analysis shows that as of 2020 only 13% of livestock farmers have sown some form of clover (legume) mix into their temporary grassland with 25% of holdings still lacking any kind of legume incorporation. This leads to some key questions; 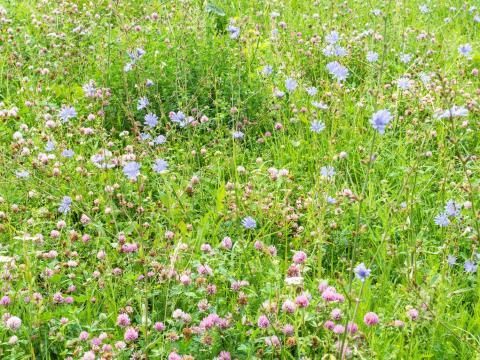 On assessing multiple trials and meta-analyses in current scientific literature, as noted above, a huge range of outputs dependent on conditions, farming scenarios and specific experimental data being recorded was identified. Despite this, however, there are some patterns that appear regardless of parameters:

Across 12 studies analysed (by no means representative of the total effects of legumes overall) the average percentage of GHG reductions, in CO2 equivalent emissions, via the incorporation of some form of legume was 39.27%. However, it is important to note several studies collected and collated information in different ways under different conditions which could skew analysis, as such this figure is provided as an indication of impact only. A further trend that was observed across these studies was that a greater overall reduction in CO2 equivalent kg/ha/year was seen for legume systems which still incorporated some level of N fertiliser application compared to equivalent systems which attempted to completely remove N fertiliser applications. This matches with the overall finding that simply reducing/removing N fertilisation is not feasible nor potentially the most environmentally beneficial course of action.

Nitrogen inputs/levels and legume incorporation in agriculture and their effects on GHG emissions are highly complex and variable due to the range of situations in which they can be applied. Simulations of systems do demonstrate reductions in GHG emissions upon cutting fertiliser usage, but there is a multitude of other issues such as a reduction in soil fertility, losses in yield and profits and the need for additional, compensatory land-use change that could potentially offset these improvements. It is suggested that a reduction in N fertiliser is used as part of a more holistic strategy to reduce GHGs, selecting the correct fertiliser, optimising application timing and rate, considering weather conditions, crop demand and soil properties and embracing technology to target application should all form part of a GHG mitigation strategy going forwards. Furthermore, there appears to be a need for a more structured large-scale approach to research in this field to provide data that is directly comparable and has increased robustness compared to analysing trends in unrelated data collections.