Increasing biodiversity in farmland is a major challenge and opportunity for the farming industry, which can offer benefits in terms of reducing environmental impact and improving public perceptions of agriculture, and how people engage with farmers and the agricultural industry as a whole. The causes underpinning biodiversity loss from within the agri-ecosystem are well documented and typically relate to increasing intensification of management practice in the latter half of the 20th century. In today’s farmland landscapes simplified systems have replaced more diverse communities, such as in grassland systems where leys comprising 1-3 species are established in favour of more traditional species rich pastures. Species rich grassland communities typically contain numerous plant species (including grass, sedge and herb species), which in turn support move diverse associated species groups including invertebrates, birds and mammals.

Whilst biodiversity conservation is extremely important, this must be balanced against the needs of farm businesses and the requirements for food production to ensure food security. Evidence exists for the potential of species-rich pasture based approaches to deliver multiple benefits to the farmer, such as reduced input of expensive materials such as fertilisers, and to wider communities in the form of increased ecosystem service provision. However, this approach requires further testing at the farm level to demonstrate the potential for application in Welsh landscapes.

Current grassland farming approaches can generate high yields of dry matter by cultivating very productive species with large inputs of fertiliser. This approach is accepted to generate the highest rates of production in terms of livestock, but can have a detrimental effect on biodiversity and ecosystem service delivery. However, it may be possible to reduce this environmental impact through the restoration of traditional, species rich grasslands, which were once an iconic feature of the British landscape. 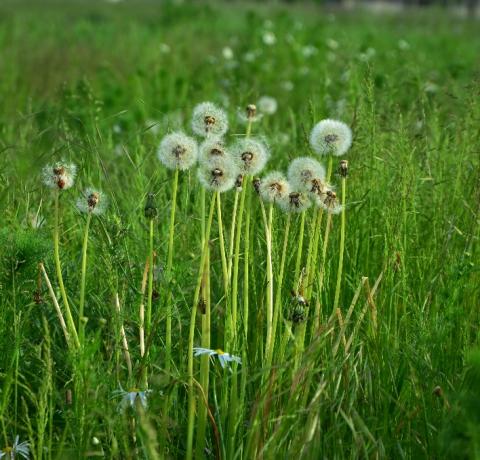 Biodiversity experiments have shown that rates of productivity and species richness are positively related. When comparing sets of sown grassland plots with different amounts of species, yield has been demonstrated to be higher in species rich grasslands than in species poor, and that this effect remained consistent in the long term (8 years). In one study comparing productivity in grassland managed either as high-diversity (of plants) low-input (of fertiliser) or as high-input low-diversity, yield was observed to increase as a result of higher plant diversity, which served to offset any yield gains from fertiliser input, resulting in similar yields from either system. Low plant diversity in this study may not necessarily relate to low diversity fields such as in intensive UK grassland systems, which contain few, but highly productive, species. Nevertheless, in principle at least, increasing species richness in grasslands could be an alternative management strategy for effective grassland production, which offers reduced environmental impact and production costs.

Increases in yield with higher species richness have been attributed to the influence of resource partitioning, both above and below ground, which is where different growth forms allow for better usage of resources such as light or nutrients. This can allow plants to utilise resources that a neighbouring species is unable to capture (such as when plants with different root depths utilise nutrients at different levels in the soil profile) reducing the impact of competition. This is referred to as niche complementarity, where there are positive interactions amongst species by virtue of having numerous different plant species from a wide range of life histories. In addition, the architecture of more complex plant communities, again both above and below ground, can also allow for greater density of vegetation as a consequence of the different growth forms being able to live in more close proximity.

Increasing plant species richness can increase the density of vegetation below ground through the mechanism detailed above. Carbon, in the form of organic matter, is introduced to soil via the growth of plant roots and from root exudates. Fertiliser application can increase plant growth which can increase soil organic matter input through this mechanism, but fertiliser input can also increase the activity of microbial organisms, which can speed up rates of decomposition leading to carbon loss. Recent research has demonstrated that intensive grassland management has reduced soil carbon stocks at sites across England and that this effect is observable, and considerable, at much greater depths than previously recognised. In a study considering grasslands across a range of management intensities (from traditional, low intensity management with little fertiliser input and high plant diversity, to more intensive management, with high fertiliser inputs (>100 kg nitrogen per hectare per year) and few, high productive species), soils under low intensity management with high species diversity were shown to have significantly higher carbon content than those managed intensively.

Interestingly, the highest levels of soil carbon recorded in this study were under intermediate management (which had typical inputs of ~ 25 – 50 kg nitrogen per hectare per year and intermediate levels of plant diversity). This follows existing predictions for soil carbon accumulation, where the amount of nutrients added is a key factor which can both stimulate carbon inputs to soil, as a result of increased plant growth, but also, simultaneously, decomposition rates. Thus, the law of diminishing returns can be applied: there is an optimum amount of fertiliser input which will be beneficial, but rates of input beyond this may have a negative influence on soil carbon. In addition, soil under the low intensity management also had lower soil bulk density levels, which could be considered beneficial in terms of water infiltration rate, which is important for reducing the potential for flood events.

The case for maintaining current levels of yield by increasing grassland plant species richness (and consequently the species richness of associated fauna) is compelling. This could offer a model to reduce the necessary economic input, whilst increasing biodiversity and the delivery of other ecosystem services, including the potential for improved carbon storage. However, some further consideration regarding approach to planting species rich mixtures is strongly advised if undertaken, as site and soil may require initial preparation before species rich mixtures are sown if they are to be successful. Much literature exists on effective methods for species rich grassland restoration which is widely available online.

As a country dominated by grassland agriculture, Wales is particularly well placed to lead on initiatives such as this, which could increase business efficiency. If demonstrated to be effective, this approach could offer a system to future proof Welsh landscapes against the predicted influence of current environmental change, to reduce carbon loss from Welsh soil (as well as potentially increasing carbon sequestration over time), all whilst maintaining current agricultural yield and reducing fertiliser requirement and therefore management cost.