Colostrum management for the best start in life

Colostrum or “first milk” is essential for the survival of newborns, setting the animal up for a healthy productive life. Lambs and calves are born with no antibodies as they cannot cross the placenta and as such, they rely entirely on the passive transfer of antibodies from the dam’s colostrum. However, the newborn’s ability to absorb these antibodies through the intestinal wall declines with advancing age, so the provision of colostrum is time sensitive. The newborn loses the ability to absorb any antibodies by 24 hours of age and correspondingly the dam’s colostrum will progressively dilute as their milk comes through. The main indicator of colostrum quality is the concentration of immunoglobulin G (IgG), a key Ig, capable of binding to a wide variety of antigens on pathogens and allergens. Of course, this is only one of many different Igs present in colostrum which also contains a high level of fat (around 77g/kg) to help the newborn maintain their body temperature and high levels of protein to give a nutritional boost. However, not all colostrum is created equally, and quality is dictated by a variety of factors, including parity, the dam’s nutritional status, genetics and health. Because colostrum is instrumental in the development of the newborn immune system and lamb/calf survival, it is worthwhile to assess colostrum quality and closely monitor intake in newborn livestock. So how can we ensure animals are producing the best quality colostrum possible? What options are out there for taking accurate measurements? And what are the implications for later life?

A variety of factors can influence colostrum quality and whilst many of these are shared between ruminants (predominantly cattle and sheep) some variables are better researched than others according to species. One of the best-researched influences on colostrum is maternal nutrition and body condition, however, study results may be surprising. Many have found that maternal nutrition does not significantly affect colostrum quality in terms of protein and energy content which may indicate a more complex relationship between the two. In ewes, studies have found that a body condition score (BCS) of 2.5-3.5 did not impact the levels of IgG in colostrum, lamb birth weight, mortality or weaned weight. Undernutrition of ewes in the last 20 days of pregnancy and/or during lactation also did not affect birth weight or colostral IgG but did significantly affect lamb growth rates due to reduced milk volume. It is thought that this lack of effect is due to the ewe’s ability to prioritise its lambs - compensation and nutritional partitioning ensure the lambs receive what they need, but after birth, the lamb’s immune system also has to work overtime to make up for nutritional deficits. A similar effect is seen in cows, with little variation in colostrum quality as a result of feed intake. So, whilst nutritional status in the very late stages of pregnancy does not significantly affect the quality of colostrum produced the provision of targeted nutrition and keeping animals at a target BCS throughout pregnancy will only be beneficial. When studies have assessed the effect of diet starting early in pregnancy, in this case at 50 days, it was found that those given 100% of nutritional requirements had significantly higher colostral IgG concentrations than those at 140% and 60% of requirement. Suggesting that there is no benefit to overfeeding ewes and that underfeeding can have detrimental effects on colostrum quality. Maintaining an appropriate BCS is also vital for an uncomplicated and easy birth as well as the volume of milk generated later on, which in sheep significantly impacts lamb growth rates. As such, it is worth targeting nutrition for transition animals and maintaining the correct BCS.

Some variation in colostrum quality is seen according to season, but whether these are a reflection of pasture quality/diet as opposed to seasonal variation is unclear. The nutritional superiority of fresh pasture over grass silage has been long established but studies continue to produce inconsistent results with regards to its effect on colostrum. Whilst one Norwegian study found that cows calving in the winter (December, January, February) produced colostrum containing very low levels of IgG another Iranian project found the reverse. This is possibly due to the marked variation in climate among the different seasons according to country which leads to differences in disease occurrence, feeding programme and grazing period, all of which may influence IgG production. 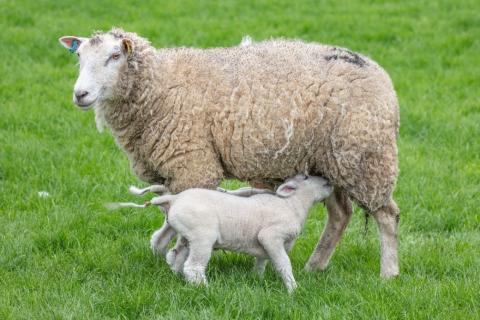 Studies have also found that genetics plays a significant role, with different breeds of sheep producing colostrum containing different quantities of IgG. Cattle-based studies have been able to rank breeds in terms of their total colostral immunoglobulin content: Jersey (9%)> Ayrshire (8.1%)> Brown Swiss (6.6%)>Guernsey (6.3%)> Holstein (5.6%). Breed also affects the type of immunoglobulins present in colostrum, with Jerseys having the highest concentrations of IgG (6.6%), A (1.9%) and M (0.5%), Holsteins having lower levels of IgG (4.1%) and Guernseys lacking in IgA (0.9%) and M (0.4%). Genetic estimates suggest that in Holstein cows colostrum fat and total solids have a moderate heritability rate (0.22 and 0.27, respectively). Whilst other traits such as energy content, protein and lactose had lower heritability scores, they are still genetically controlled, suggesting that selective breeding programmes could help to improve colostrum quality in dairy herds.

Colostrum is vital for immunity in the newborn as the animal is born naïve (essentially with no immunity) and relies entirely on the mother’s colostrum to form the foundations of its immune system. Failure to provide adequate colostrum in the first 24-hours of life will hamper the animal’s immune system increasing the immediate risk of infection and the need for antibiotics whilst reducing the newborn’s capacity for nutrient absorption in the gut.

The effect of colostrum on the offspring in later life is better researched in cattle simply because dairy operations provide the ideal scenario for sample collection whereas research in sheep is much scarcer. In addition to the immune system, colostrum also plays an important role in the development of the calf’s gut. The high concentrations of hormones and growth factors in colostrum are essential for the development of cells in the small intestine, promoting growth and protein production. The total amount of ingested colostrum directly affects villi size in the intestine –specialised, finger-shaped cells that increase the surface area for nutrient absorption, so larger villi result in better nutrient absorption. Studies have found that calves fed colostrum absorbed larger amounts of glucose compared to those fed formula or milk replacer. Colostrum also helps to stimulate the metabolism of newborn calves and kick starts the development of skeletal muscle, however, effects on lifetime performance remain unclarified and would benefit from further research. 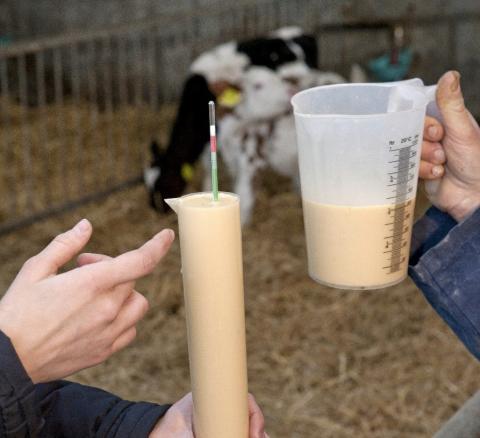 Measuring colostrum quality is important to ensure that newborn livestock are receiving the very best start in life and to determine whether it’s worth freezing and storing for later use. Whilst some assess colostrum “by eye” this is not an accurate method, as the viscosity and colour of the colostrum are mostly dictated by fat levels, not immunoglobulin concentrations. To be successful, any on-farm colostrum measuring device must be reliable, accurate, and easy to perform. Traditionally, a colostrometer has been recommended - the density of colostrum is measured which can then be related to IgG concentration, so the denser the sample, the more IgG it contains. This is done by suspending the device in a cylinder of colostrum and assessing its buoyancy – the more buoyant the device, the denser and better quality the colostrum. However, this method has several drawbacks: the device is usually made of glass and can be fragile; the colostrometer and all other tools must be thoroughly cleaned before each use, and colostrum must be at 22°C to give an accurate reading. 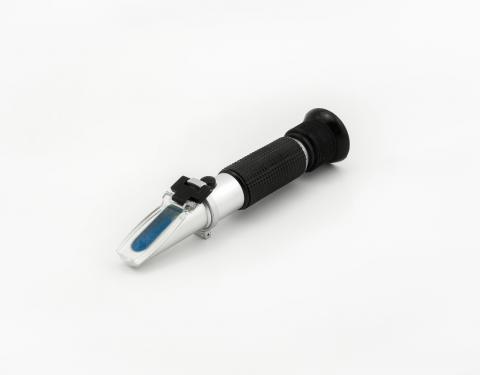 As a step up from the colostrometer, Brix refractometers have seen a surge in popularity. These are small, handheld devices that use the refraction of light to measure the density of colostrum. The denser the sample, the more the light will bend which gives a higher score on the internal scale or digital readout, ideally aiming for 23% although a score between 22 and 30% is considered good quality. A score of 23% correlates to 50 mg/mL of IgG, the minimum required concentration of antibodies in colostrum. The refractometer requires a much smaller sample than the colostrometer, plus it is quicker, easier and more accurate since measurements are not affected by temperature. In a perfect world, all colostrum would be tested using radial immunodiffusion (RID), a highly accurate laboratory assessment that is considered the “gold standard”. However, this method is expensive and time-consuming - taking 18-24 hours before results are ready.

Recently, infrared spectroscopy (IRS) paired with statistical analyses has emerged as an alternative technique for assessing colostrum quality. IRS is a rapid test that requires minimal sample preparation, and can measure a variety of components in colostrum and milk using the same principles of light as refractometers only on the infrared scale. A small, portable infrared spectroscope has been manufactured that is well-suited for use on the farm (e.g. microPHAZIR™ RX analyser), however, this device remains expensive and is mostly used in laboratory situations. This method also needs to be coupled with downstream statistical analyses to transform the numbers into useable data, a concept which must be developed into a rapid and user-friendly system. Scientific studies agree on a hierarchy of accuracy in colostrum measurement devices and methods, taking into consideration different spectrums of light (near and mid) and an optical or digital readout for the refractometer:

Whilst the colostrometer ranks low down in this list, it is certainly a better option than not testing colostrum at all. With the development of small but accurate, handheld refractometers with digital readouts, measuring colostrum quality is a simple and quick process, with plenty of options on the market at a reasonable price.

Colostrum forms the basis of the newborn’s immune system and provides the nutritional boost needed to start life in the form of essential fats and proteins. The animal is born without any kind of immunity, so relies on this passive transfer from the mother via colostrum to begin developing an immune system. The newborn absorbs these antibodies of immunoglobulins through the gut wall, but only for a limited time as by 24 hours of age channels are closed – so it is vital to provide good quality and quantity of colostrum quickly. Significant variation is seen in colostrum quality within herds or flocks and between farms with a variety of causal factors. One of the primary influences appears to be parity and age – first- and second-time lambing ewes produce colostrum with the highest level of antibodies, whilst cows in their third, fourth and fifth lactations produce the best quality. As such, heifers may benefit most from careful monitoring of colostrum with a good quality replacement on standby. Meanwhile, older ewes would likely benefit from colostrum assessment to ensure lambs receive an adequate quantity of antibodies. There is a weak to moderate genetic link for colostrum quality, so selective breeding programmes could result in improvements in this area. Maintaining target BCS and providing the correct nutrition throughout pregnancy is important for colostrum production. Targeting nutrition according to BCS and litter size, ensures the dam does not suffer when partitioning nutrients and produces the best quality colostrum possible. Evidence shows that this cannot be influenced by adjusting the diet late in pregnancy and so the mechanisms must be put in place in early and mid- pregnancy by regularly monitoring and maintaining the correct BCS. There are several options for testing colostrum, on-farm devices include colostrometers and refractometers whilst infrared spectroscopy and RID can be used in a laboratory setting. For on-farm measurements, a handheld digital refractometer is the most accurate, quick and easy method of assessment and devices are widely available.