The milk produced by dairy cow breeds is composed of approximately 87% water and a variety of dissolved, emulsified, and dispersed compounds. These compounds include lipids, proteins, carbohydrates, salts, vitamins, and minerals. Of the different types of lipids contained within milk, fatty acids are of particular interest as these are known to have significant impacts on human health. 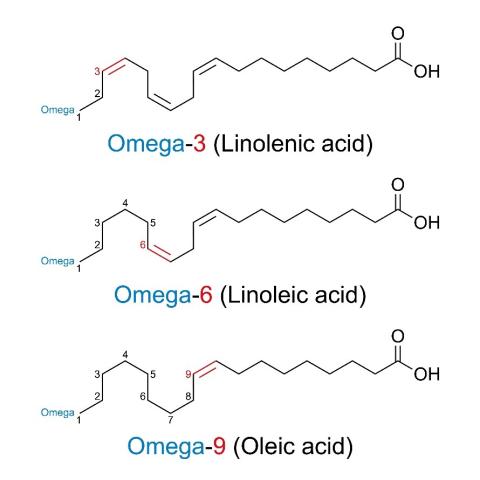 Polyunsaturated fatty acids are classified according to the position of their first double bond.

Generally, polyunsaturated fats are considered to be more beneficial to human health than saturated fats, as the latter have been associated with conditions such as increased low-density lipoprotein (LDL) cholesterol, heart disease and stroke. However, unsaturated fatty acids such as omega-3 and omega-6 fatty acids have protective biological functions. One omega-6 fatty acid present in milk is conjugated linoleic acid. This has been identified as having potent anticarcinogenic properties and is one of the most extensively studied fatty acids in milk. However, the dietary balance between omega-6 and omega-3 fatty acids strongly affects their function. Diets with a high ratio of omega-6 to omega-3 fatty acids, such as the modern western diet, are associated with an increased risk of cardiovascular disease, cancer, and inflammatory and autoimmune diseases. However, diets with a low ratio  of omega-6 to omega-3 fatty acids (1-4:1), are thought to reduce the risk of many chronic diseases. Therefore, substituting saturated fats for polyunsaturated fats, especially conjugated linoleic acid and ALA, and consuming a diet with a small omega-6 to omega-3 ratio is important to optimise health.

As the saturated and polyunsaturated fatty acid profile of milk is influenced by the cow’s diet, this can be manipulated to produce milk with a fatty acid composition considered beneficial to human health. One European Innovation Partnership project involving 20 dairy farms from Southwest Wales is aiming to investigate which of their pasture management practices result in the highest levels of polyunsaturated fatty acids in their milk.

The fatty acid concentration of milk is dependent on a number of factors, including the composition of fatty acids within the cow’s diet, the microbial activity of the rumen, and fatty acid synthesis within the mammary gland.

Diet related factors that affect the fatty acid concentration and composition of milk include energy intake, fibre intake, and ruminal fermentation. However, the factors considered to be the most influential are plant specific and include the plant species, the cultivar, the plant’s growth stage, and its conservation status (fresh vs. conserved). Seasonal, regional, and weather related environmental factors also have an effect, as do the cow’s genetics (breed), and her stage of lactation.

For fresh grass and legume forages, fatty acid content is generally lower than 50g per Kg/DM. However, ALA is the most abundant fatty acid and can reach levels greater than 50g per Kg/DM during times of early vegetative growth in the spring. Total fatty acid levels within grasses are highest in spring (April), decline during the summer (June), and recover in autumn (September and November). The ratio of linoleic acid to ALA also decreases during the summer months, with ratios of approximately 4.5-6:1 during spring, 2-4:1 during summer, and 4-5:1 during the autumn.

As fatty acid levels are correlated with plant growth stage and leaf proportion, different varieties of grass produce different fatty acid profiles during different times of the year. For example, L. ×boucheanum (a hybrid of L. multiflorum x perenne) and Italian ryegrass (L. multiflorum)  have been found to have higher total fatty acid and ALA levels than perennial ryegrass (L. perenne) during the spring and autumn respectively. However, perennial ryegrass has higher total fatty acid and ALA levels than Italian ryegrass and L. ×boucheanum during the summer.

Similarly, different clover species produce different fatty acid concentrations. The concentrations of linoleic acid in red and white clover are comparable to one another and to ryegrass. However, the concentration of ALA tends to be slightly higher in white clover compared to red clover, which is comparable with ryegrass. The ratio of linoleic acid to ALA in fresh white and red clover is smaller than that for grasses, at approximately 2-3:1 in both the early and late stages of growth.

The total fatty acid levels of conserved forages are lower than for fresh forages as the processes of drying, oxidation and leaf shatter reduce lipid levels, particularly linoleic and ALA levels. Therefore, lipid levels are also significantly lower in hay compared to silage. Similarly to fresh grass and clover, ALA is the most abundant fatty acid in grass silage, however, linoleic acid is the most abundant fatty acid in maize silage and whole crop wheat silage.

The diversity of the plant species in the cow’s diet also influences milk composition. For example, switching from a monoculture maize silage to a silage cut from a diverse grass meadow can increase beneficial polyunsaturated fatty acids, including omega-3 fatty acids and conjugated linoleic acid. As clover has a higher proportion of ALA to linoleic acid than ryegrass, incorporating red or white clover into a ryegrass based forage can also increase omega-3 fatty acids, particularly ALA in milk.

Some of the diets considered the healthiest in the world, such as the Mediterranean diet, contain relatively low levels of saturated fats and high levels of unsaturated fats. Many studies have shown that cows consuming fresh forages produce milk with a greater concentration of unsaturated fatty acids. Furthermore, the concentration of ALA and conjugated linoleic acid, two important omega-3 and omega-6 fatty acids is increased in milk produced from cows fed fresh forages. As public awareness of the health benefits of different foods and food components increases, increasing the polyunsaturated fatty acid composition of milk through dietary manipulation has the potential to increase the health status of milk. Additionally, as consumer demand for grass-fed, extensively managed milk and meat products is also increasing due to an increased awareness of animal welfare, milk produced from cows grazing fresh forages has the potential to meet changing consumer demands.