Feasting like kings – how to prevent birds feeding on TMRs

The issue of depredation on total mixed rations (TMR) and indeed any hard feed by birds is a problem that has plagued farmers for centuries. The challenge is found worldwide, wherever seed or feed is present in large quantities, so follow scavenging birds such as the European starling, sparrows, pigeons and doves. Many different techniques have been used to measure feed loss and cost to the farmer such as weighing scales, motion sensors, cameras and statistical models. A wide variety of mitigation strategies exist, from human scarers to audio recordings of distress calls. The most appropriate and most effective form of mitigation depends entirely on the farm in question, although, combining exclusion techniques with other methods has been proven the most effective approach.

Starlings are well known for their partiality to TMR. These birds are a mixture of migratory and UK natives, all of which are protected under the Wildlife and Countryside Act (1981). Challenges arise when native UK populations are joined during the winter months by huge flocks migrating from North and Eastern Europe and are drawn to farms where an ample, nutritious food source lies in wait. Come summer, these large swarms of birds return to their native country and domestic starlings disperse to higher land to breed. In addition to the fact that livestock are less likely to be fed a TMR in the summer, the problem becomes dormant again.

Starlings do not roost and forage at the same location and will move between several feeding sites, making them an ideal vector to disseminate pathogens. It has been confirmed in the USA that European starlings are capable of transmitting E. coli, Salmonella, Campylobacter and Mycobacterium avium subspecies paratuberculosis (the causative organism of Johne’s disease) to cattle. A study found a positive correlation between starling density and the presence of E. coli in faecal pats, which was further supported by genetic testing on bovine and starling samples confirming the hypothesis that starlings are capable of spreading E. coli amongst cattle. 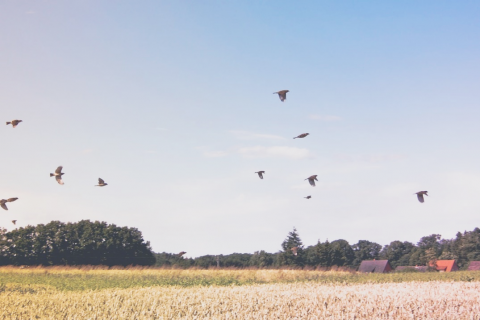 Alterations to the migration patterns of starlings can also be problematic, as the winter of 2012-13 saw an extended migratory period during which some birds remained in the UK for more than a month longer than usual due to an unseasonal cold spring. This resulted in a longer period in which starlings were able to predate upon cattle feed, equating to larger losses for the farmer.

A report by Kingshay (2012) highlights that whilst starling numbers have declined across the UK, high population levels are observed by beef and dairy farmers during the winter months as huge flocks migrate from Eastern Europe, the Baltics and Scandinavia. The report concludes that losses can range from £35 to £153 per day per 100 cows, with an average loss of £96. Animal health was not taken into consideration in this instance, which could add considerably to the financial impact of infestations on the farm. Table 1 is adapted from the report by Shipton et al., (2012) and offers an example of the methods used to estimate milk losses due to bird depredation on a dairy farm of 100 cows.

The report also analyses the nutritional quality of maize silage before and after starling depredation, which showed a decline in the percentage of starch, bypass starch and oil, all of which suggest the selective removal of maize grains from the silage. Maize grains have a starch content of over 70%, which constitutes a large portion of available energy. Feed loss was found to be directly related to bird activity, with a flock of approximately 20,000 birds causing up to 12% feed loss, equating to £0.37/cow/day.

There are a large variety of potential methods for preventing or reducing depredation by birds:

Not all techniques are appropriate for all farms and often changes in feed management may not be an economically viable strategy. A combination of strategies is considered most effective and may be applied simultaneously or sequentially but are best applied prophylactically (i.e. before the problem even begins).

Research has found that the larger in diameter the feed pellet, the less likely it is that starlings will be able to eat it. Feeding cattle pellets 1.27 cm diameter or larger was effective at preventing starling consumption on a farm in Kansas, USA. Feed consumed by birds reduced with increased pellet size – 1.27 – 2.22 cm resulted in consumption of just 4% of the offered ration, whilst pellets 0.39-0.55 cm suffered 50-54% depredation. The study suggests that optimum particle size is 0.95 cm in diameter and smaller as starlings were able to consume only 11% of the offered feed, with depredation reducing with pellet size. Preventing consumption may even encourage starlings to leave the farm altogether in search of alternative feeding sites providing a long-term solution. Changing feed times is another straightforward but effective approach, as starlings generally feed twice a day (breakfast and dinner). Feeding in the afternoon after the starling’s early morning feeding period is finished provides cows with an uncontaminated and complete ration. Feeding twice a day can also reduce depredation and faecal contamination for the same reasons.

After looking at various deterrents, studies have concluded that physical exclusion is the most effective strategy, for example, netting or covers over feed storage and bunkers, especially when rigorously maintained. The minimum gap that an average-size starling may fit through is approx. 2.8 cm so exclusion methods must be robust and of the correct size to be effective. Exclusion materials can be costly and in the case of nets and covers may interfere with access and maintenance. The below photograph demonstrates one type of netting that may be used, with holes small enough to exclude a sparrow. 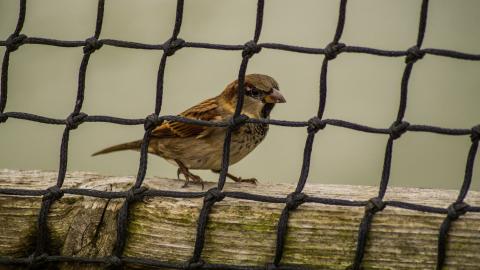 Auditory techniques were determined to be relatively effective but there was a risk of habituation (birds becoming accustomed to the deterrent). It is recommended, therefore, that frequent changes in device location & sounds are essential. The most effective auditory deterrent was found to be species-specific alarm and distress calls; however, these systems may prompt noise complaints where farms are close to residential areas. Similarly, the use of gas guns and shooting to scare often result in complaints of noise nuisance in residential areas. Gas guns and other pyrotechnic methods can be costly to deploy and maintain, and although these methods are moderately effective, in the long-term habituation has been seen. It should be noted that pyrotechnics are suitable only for use on croplands as the noise can cause stress to livestock.

Visual techniques also vary in efficacy but are most effective when applied in conjunction with auditory methods. Habituation to decoy objects (statues of predatory birds or scarecrows, for example) is rapid and common. On the other hand, live decoys such as dogs and human scarers are more effective but are labour intensive and costly. Similarly, falconry and other birds of prey is effective, with the most commonly used raptors being Goshawks and Peregrine falcons. Nevertheless, the use of predatory birds can be expensive and time-consuming but does offer rapid removal of pest birds across very large and potentially inaccessible areas but must be repeated regularly. 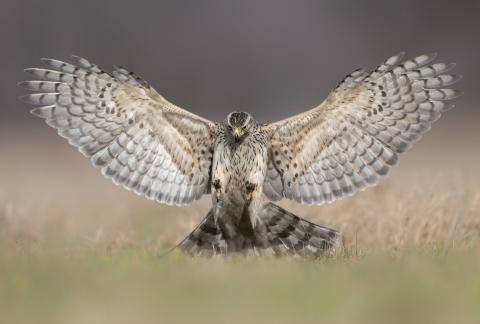 There is no one mitigation strategy that will suit every farm and there have been very few technological advancements in the area. Certainly sensor-based systems may be employed, but they are also non-specific and will be triggered by any movement. Even battery-operated sensors would require charging and may be at risk of damage when placed at the bunker, in reach of livestock. As previously mentioned, research into feed particle size is the most recent development published and presents a cost-effective, non-lethal and long-term strategy for reducing depredation by birds. Combining the high-energy components of a TMR into the pellet should also minimise nutritional depletion of selected feed components. In the future, building upon this research and collaborating with feed companies could encourage incorporation into commercially available feeds.

As highlighted in the literature, depredation by starlings on TMR fed to livestock is a significant problem, causing estimated losses of £9.60 per cow, per day. In addition to significant financial losses, there is also the potential for birds to spread pathogens between farms such as E. coli and Salmonella sp. A wide variety of mitigation strategies exist and are employed in the UK with mixed success. An effective method of preventing feed consumption by birds is simply to use pellets that are too big for them to manage, whilst this is a straightforward strategy the availability and variety of large pelleted feeds may be a limiting factor. Visual displays, auditory recordings of distress calls and shooting to scare can be effective in the short term, but habituation commonly occurs rendering the method ineffective. Birds of prey are highly effective, especially when the raptor species is targeted to a core pest species. Flying raptors can cover large and inaccessible areas of land but can be expensive and time-consuming. Physical barriers are considered effective in preventing bird depredation and whilst costly to install, efficacy will not decline provided they are well fitted and maintained. Depending on individual circumstances, feeding times may also be altered to deter birds, but any mitigation method will need to be tailored to each farm’s unique circumstances.