Major changes in current land management practice are needed in order to meet the challenge of reducing greenhouse gas (GHG) emissions to ‘net-zero’. For those not familiar with the concept, net zero is the target for achieving a balance between greenhouse gas emissions produced and the amount removed from the atmosphere. It is a net rather than a gross target as eliminating all emissions would be unrealistic, but a balance can be struck between reductions in GHG output and increased offset, predominantly using natural carbon sinks such as soils and vegetation for the purposes of sequestration.

Achieving net zero is an essential action as part of the UK’s legally binding commitments made in the Paris Agreement, adopted in 2015 and made law in 2016, which aims to limit global warming to below 2 oC, and preferably under 1.5 oC. Under this agreement, and to achieve this goal, GHG emissions must be reduced to zero by 2050. Reaching net zero in the UK will require extensive changes to be implemented right across the economy. This will include moving away from the use of fossil fuels towards extensive electrification and the development of a hydrogen economy. It will require sizeable increases in energy and resource-use efficiencies, and changes at the level of the individual with regard to the demand for certain carbon-intensive activities.

As part of this, land management systems in the UK will be expected to modify to increase the potential for sequestration. This is likely to be in the form of increased biomass growth, achieved by the increased inclusion of organisms such as trees in agricultural landscapes, and by improving the management of soil to ensure maximum potential for sequestration (or at least, the retention of existing soil carbon). Understanding the influence of current land management on existing and potential stores of carbon is key and is a factor farmers are keen to investigate as shown in this EIP Wales project.

Removing CO2 from the atmosphere 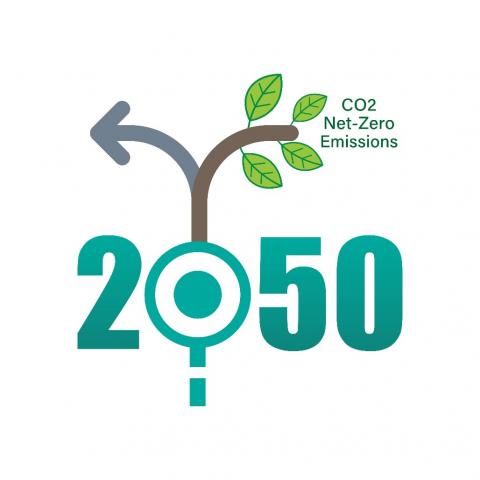 There are two primary approaches for removing carbon dioxide (CO2) from the atmosphere: using technology to capture and sequester this gas, or using organisms such as plants to sequester the carbon in their biomass, which happens after they utilise CO2 during photosynthesis. Carbon capture technologies do exist, and in the future these may well play a more involved role in the regulation and reduction of CO2 emissions and atmospheric CO2 concentrations. However at this stage this technology should not be viewed as a panacea. Instead, altering land management to increase the sequestration of carbon in natural reservoirs is an approach which can be implemented immediately and is viewed as a key future strategy for achieving net zero.

This means that agriculture is uniquely placed to deliver multiple benefits in terms of achieving net zero. Agriculture, like all production systems, contributes to climate change through the emission of GHGs as a consequence of production. However, the primary GHG emitted from agricultural production is methane. This means that suitable modifications to production could simultaneously reduce methane output and increase CO2 sequestration, which has the potential to deliver significant advantage. 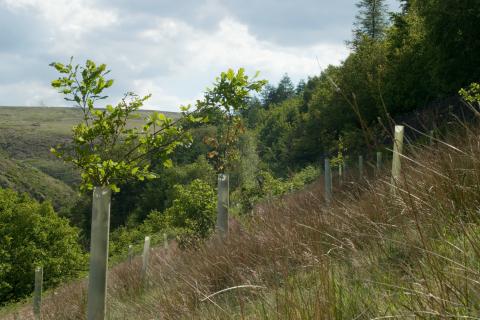 Estimations for how the UK landscape will have to change in order to manage climate change objectives indicate that around 22% of land currently employed for agriculture will need to be released for other uses, such as carbon sequestration, habitat restoration, and bioenergy production.

Tree planting in the UK is estimated to need to increase to thirty thousand hectares per year between now and 2050 (which is equivalent to 90 - 120 million trees planted per year). Increasing the efficiency of existing forestry management to increase current yields will also be required, through improved silvicultural practices. As part of this tree planting will also need to occur on existing crop and grassland, and the presence of hedgerows will need to increase to 181,000 hectares by 2050. This has the potential to deliver around 6 MtCO2e (mega tonnes of CO2 equivalent). However, in addition to this goal, the principles of natural capital management indicate that tree planting approaches need to consider more than just carbon sequestration, as factors such as ecosystem function and resilience are likely to be as important in terms of overall sustainability and ecosystem service delivery. 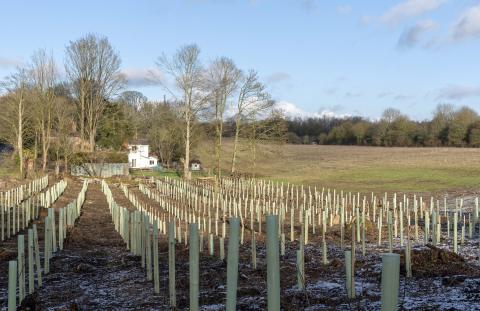 Improved peatland management is also a key component of future climate friendly land management. Peat is a carbon store of significant importance. The restoration of peatland systems, degraded through modification in order to support food and fibre production, will be essential to return these systems to carbon sinks rather than carbon sources. This will involve blocking drains and rewetting bogs, which may increase methane emissions in the short-term. Nevertheless, this is an essential action to return this habitat to functional status. Moving production away from such sensitive habitats, allowing them to act as carbon sinks, once returned to functionality, can allow production to happen elsewhere, offsetting the overall impact of necessary food production.

Certain land management approaches may also offer opportunities to incorporate production with the goals of GHG sequestration. Cultivation of biomass crops, for the purposes of bioenergy production, may present an opportunity to integrate climate-smart actions into existing production scenarios. Producing fuel in this manner could help to reduce the reliance on fossil fuels, whilst increasing the potential for plant-based carbon capture and storage. Furthermore, this could be seen as an 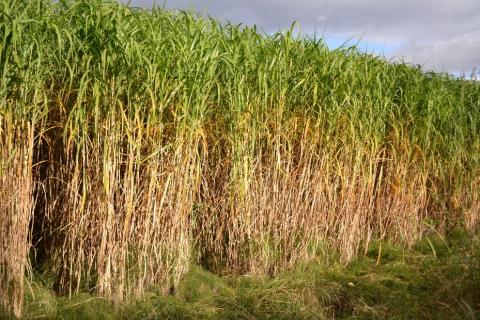 approach to draw CO2 from the atmosphere, which can then be captured using man-made carbon capture technologies during the combustion process. In this manner, this approach differs from other nature-based approaches, as in this system carbon could be effectively removed from the C-cycle, which is not necessarily the case in the long-term with other interventions.

It is estimated that planting rates of bioenergy crops, including miscanthus, short rotation coppice and short rotation forestry will have to increase to 23,000 hectares per year from the mid-2020s in order to achieve reduction targets. This is predicted to offer carbon emission savings in the region of 2 MtCO2e from the land management sector, with a further 11 MtCO2e saving from harvested products (after capture and sequestration using carbon capture technologies). 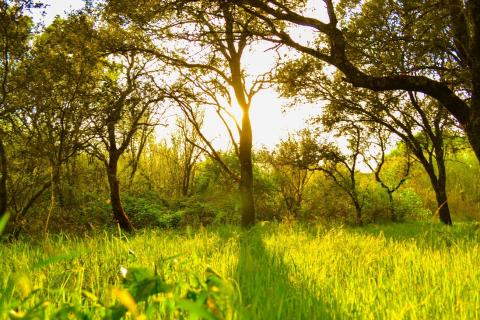 Regardless of the above interventions, reductions in the output of methane from agriculture are likely to require reductions in current rates of ruminant production (sheep, beef, dairy). This is highlighted specifically in the key findings in the report from the Climate Change Committee, and is estimated by them to require reductions in the region of a 20% in consumption rates per person, plus reductions in associated food waste at comparable rates. At current population growth-rates, this will specifically mean a reduction in current livestock numbers (compared to 2017 levels) of 10% by 2050. This is a significant number, but is perhaps in line with current trends for reductions in the demand for red meat and associated products at the consumer level.

In the future, as consumer trends change and the focus for subsidy shifts away from production outcomes towards the provision of public goods, natural capital, and ecosystem services, a philosophy of ‘less but better’ may prove to be optimum for ruminant production systems. In such circumstances, systems that embrace farming practices where climate change mitigation and increased biodiversity are core management practices, may well find these approaches are rewarded financially both in terms of likely future subsidy, and also with higher value products, especially where brands can be established to highlight the benefits provided by these land management systems.

Rapid and extensive changes are required economy-wide in order to meet the challenges of reducing GHG emissions to net zero by 2050. The land management sector is both a potential source and sink of carbon, and is uniquely placed to help the UK meet the challenge of achieving the necessary emissions reductions.

In general, greenhouse gas emissions have been falling in the UK in recent decades, and were 44% below 1990 levels in 2018. However, the UK is still not on track to meet reduction targets by 2050. The Climate Change Committee, a non-departmental public body that advises the UK and devolved governments, has highlighted that the current trajectory of policy and actions will fall well short of what is required to achieve net zero.

Climate change presents a major challenge and threat to the land management sector. The size and scale of change needed is daunting, but is achievable. And, if actioned appropriately, these actions may have the potential to provide solutions for multiple challenges currently threatening this industry. Regardless, inaction will result in a scenario where food production may become increasingly challenging. Thus, the above sectorial changes must be embraced in order to ensure a sustainable and productive future for agriculture across Wales and the UK.