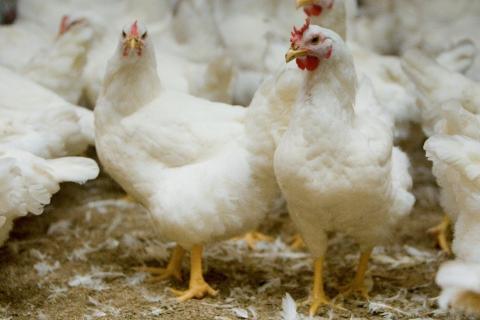 Chickens (Gallus gallus domesticus) are currently the highest consumed meat worldwide. Their fast growth, higher feed efficiency and lower environmental impact compared to other livestock species, affordability and acceptability across cultures makes them the leading contenders in the quest to secure food for current and future generations. In the UK alone 1.1 billion broilers are producing 1.6 billion tonnes of meat each year. The vast majority of these are fast-growing breeds slaughtered at 5-6 weeks of age with an average slaughter weight of 2.2 – 2.5 kg. However, their rapid growth rate and weight gain coupled with housing conditions and high stocking densities are associated with several health and welfare issues. Consequently, the industry has come under significant criticism. In order to address the health and welfare issues of fast-growing broilers, slow-growing broiler breeds have been suggested but come at a premium cost to the consumers. 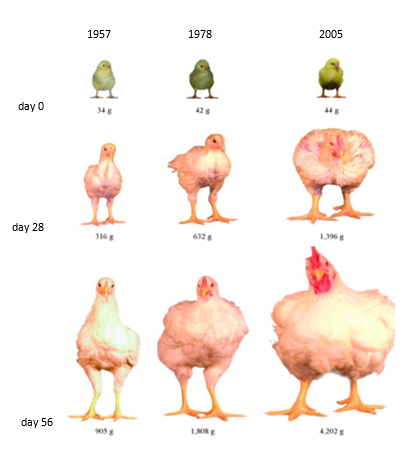 A comparison of fast-growing broilers from 1957 to 2005 showing age related changes in size- taken from Zuidhof et al. 2014

Historically the broiler industry in the UK and many developed countries has focussed on growing breeds that yield more economic benefits to the producer, processor and retailer yet are affordable by the consumer. In addition, the market for fast growing broilers was and is driven by consumer preference for cheaper protein over costlier higher welfare meats. Fast-growing broilers have an average growth rate of >50 g/day. Genetic selection for rapid growth has resulted in greater feed efficiency and shorter time to market but also inadvertent detrimental effects on broiler health and welfare. Animal welfare encompasses normal biological functioning and emotional state and the ability to express certain normal behaviours. As broilers grow and age, their level of activity progressively declines and lameness increases.

Gait scoring systems (scale 0- 5) have been developed to assess lameness, with 0 being a completely normal gait, 5 indicating the inability to walk, and birds with a gait score of ≥ 3 are considered to be in pain. Lameness can vary with production and management systems. In 2008, 27.6% of commercial broilers on UK farms were found to have a gait score of 3 or higher. However, since this data was collected more than a decade ago and breeding companies have been actively selecting against leg disorders in the meantime, current values may be lower than what is found in scientific literature. Nonetheless, lameness is an important welfare issue closely watched by the government and the animal welfare lobby.

Increased lameness also implies birds are spending more time sitting and where litter quality is poor, this increases the incidences of skin lesions like hock burns, footpad dermatitis and breast blisters which are believed to be painful in severe cases. Additionally, rapid growth can lead to high mortality due to metabolic disorders like sudden death syndrome and ascites causing economic loss to farmers. Another welfare issue in the parent stock of fast-growing broilers, called broiler breeders, is chronic hunger. Genetically, broiler breeders have a similar potential for growth and weight gain as their offspring, but while their offspring are slaughtered before they reach sexual maturity, broiler breeders live a lot longer (60+ weeks) and have good reproductive abilities. However, they are feed restricted up to 1/3 of what they would choose to eat during rearing and sexual maturity stages to prevent them from putting on excessive weight and falling prey to associated health issues. This leads to birds that are physically healthy but show abnormal behaviour due to chronic hunger (Broiler Breeder Paradox).

An important management factor that compromises broiler welfare is stocking density. The European Council Broiler Directive (2007/43/EC) has set an upper limit to stocking density (providing specific requirements are met) as 42 kg/m2, however UK codes of practice do not permit stocking densities over 39 kg/m2. Higher welfare retailers have an even more stringent maximum limit of 34 kg/m2.

Slow growing broilers, as the name suggests, are breeds that take longer to reach slaughter weight, normally 52 – 81 days compared to 35 – 42 days for their fast-growing counterparts. They also consume more feed to reach the same slaughter weight which is the main cost of broiler production. Slow-growing broiler breeders also suffer less from chronic hunger induced by feed restrictions as they are dwarf breeds and can maintain slow growth rates whilst eating more. Studies have shown that they are more active and have lower mortalities due to the aforementioned health and welfare issues seen in the fast growers.

The market for slow-growing broilers is currently small, estimated to be approximately 11% in the UK. However, there is rising interest driven by consumer trends which include animal welfare interest promoted by NGOs, legislation for minimum slaughter age, the desire for traditional cuisines and ‘Higher Welfare’ branded premium meat initiatives by retailers.

How do they compare?

As mentioned above slow-growing broilers reach market weight at an older age compared to the fast-growing ones. Data collected from pen trials suggests that stocking densities had no significant effect on feed conversion ratio (FCR) and total mortality (which includes culls and dead birds). This is likely to be due to the high welfare and biosecurity measures employed in research trials. However, on farm commercial mortality is higher in fast growers at higher stocking densities. The performance measures of the slow and fast broilers are noted below.

On high welfare farms, slow-growing broilers have demonstrated better leg health and feather cover, with fewer birds showing lesions of hock burns and pododermatitis. At post-mortem inspections, a larger percentage of fast-growing broilers are downgraded mainly due to reasons associated with faster growth rates such as perihepatitis and ascites. Slow-growing broilers have a better immune response to infections indicated by greater concentrations of serum IgY (a vital component of the response to infections) in 7-day old chicks.

IgY is a maternal antibody transferred to chicks through egg yolk and lasts up to 10 days post-hatch providing critical early life immune protection to chicks until immunocompetence is attained. Greater levels of antibodies reflect stronger early life and longer lasting protection which is especially important in broiler health due to short life spans of commercial broilers. This was demonstrated in birds experimentally challenged with Salmonella typhimurium, where slow-growing broilers appeared to be more resilient to Salmonella infection than the fast-growing birds. Interestingly, another study showed that slow and fast growing broilers experimentally infected with Campylobacter jejuni did not show detectably different levels of Campylobacter carriage. This is important from a public health perspective and suggests that other underlying reasons beyond genotype are likely to control and affect Campylobacter colonization within chickens.

Slow-growing broilers display better levels of playful behaviour (sparring, food-running and frolicking), more play bouts and are more reactive to human observers. Play is associated with positive welfare, positive emotional states, and the absence of stressors. Playful behaviour can be attributed to better leg health and lighter bodies making them more capable to play. Better leg health is also associated with positive behaviour observations such as standing, running, preening, and dustbathing. Fast-growing broilers on the other hand are less inquisitive and more fearful. They also show less foraging behaviour as compared to slow growers. Foraging which involves exploring the environment, pecking at the substrate and consuming edible findings is considered a behavioural need of chickens.

Data from a research trial has revealed that slow-growing birds have lower levels of breast striations and wooden breasts than other breeds. Both these conditions are muscle myopathies that are associated with increases in growth and muscle mass of fast-growing broilers which can result in the downgrading of a carcass. These are negatively perceived by consumers and could influence their choice to purchase whole chickens or breast fillets. 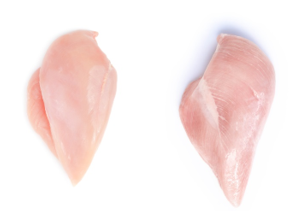 There appears to be no significant difference in the environmental outcomes of slow and fast-growing broiler production units assessed in terms of dust and ammonia levels in the production houses, but litter quality of fast-growing broiler houses may be worse than those growing their counterparts simply because of more rapid build-up of faeces per unit of floor space. Wet litter has been associated with poor broiler health. Ammonia in poultry houses has deleterious human, bird and environmental effects. However, a detailed comparative study exploring total emissions over the entire production cycle of slow versus fast-growing broilers is yet to be undertaken.

Yet given the fact that slow-growing birds need more time to reach slaughter weight, this does imply a tremendous increase in water, land and fuel consumption. Additionally, feed and land needed to grow the feed (corn and soyabeans) would increase and so would the manure produced from broiler production units. These would lead to economic implications including rising food prices. In assessing a transition to a slower-growing breed, the environmental impact needs to be carefully evaluated. 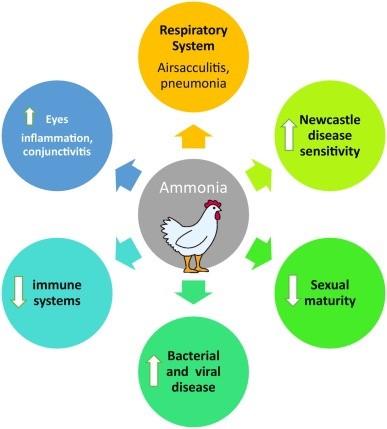 The deleterious effects of ammonia emission on birds – taken from Swelum et al. 2021

Selection for increased feed efficiency and muscle deposition has resulted in a number of health and welfare concerns in fast-growing broilers. Although the welfare of these birds can be improved by good husbandry practices and at lower stocking densities, it cannot eliminate the issues, especially those associated with rapid growth rates. Slow-growing broilers offer a solution to the health and welfare issues of these fast growers. Additionally, they express more natural behaviours and are more resilient to infections.

Slow growing broilers consume more time and resources to reach slaughter weight hence may not be an environmentally friendly option. A thorough detailed study of the environmental impact and carbon footprint of slow-growing broilers is needed before completely transitioning from fast-growing breeds. They also come at a premium cost to consumers hence their affordability by all sections of society is questionable.