Why sheep for dairy

Globally milk production is dominated by the dairy cattle sector which according to the FAO accounts for 81% of worldwide production followed by 15% for buffalo and 4% combined for goats (1.9%), sheep (1.3%) and camels. Across the rest of Europe sheep’s milk production is more common than in the UK (<0.1% of the global total) with the highest production, around 8.7% of the sheep specific global total, coming from Greece. Despite low shares of production for small ruminants like sheep and goats this has more than doubled in the last 50 years suggesting a growing trend of uptake. UK wide it is suggested that only 30 – 45 sheep dairy farms are currently operating, this is a minute fraction of the 219,000 agricultural holdings present in the UK based on DEFRA figures. Milk and milk products contribute significantly to available calories within the global food chain with affluent countries such as the US, UK, Australia and much of Europe having average consumptions of >250kg per person per year. Alongside the calories supplied, milk also supplies large amounts of dietary vitamin B12 (used in red blood cell and nervous system maintenance) and significant amounts of vitamin A (used in immune system maintenance) along with lower quantities of other vitamins. Vitally these products also contribute the majority of available calcium (used for bone strength, growth, repair and vital in cellular function throughout the body) in the food supply chain. 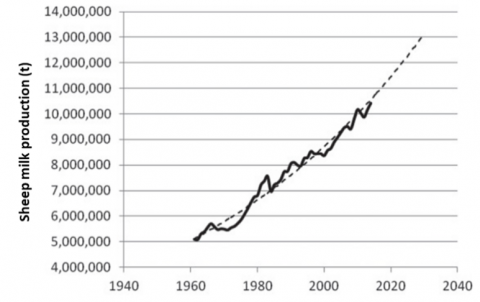 Of the milk produced in the UK most is processed into cheese, with European sheep-milk cheeses being a growing area of the international cheese market. France, Greece, Italy and Spain dominate much of this industry’s output and almost half of all dairy-related research comes from these regions.

Sheep’s milk is particularly beneficial for cheese production due to suggested higher fat and protein contents (specifically casein) along with total solids compared to cow’s milk, as these play key roles in the ease of milk clotting for achieving higher yields in cheese production. Additionally less additive products such as calcium chloride, rennet and chymosin are needed in sheep’s milk curd production compared to cow’s and goat’s milk cheeses.

Alongside these beneficial physical aspects of sheep’s milk over other milk specific to cheese production, there are other health and nutritional benefits which have come to the forefront of marketing and sales as consumers move towards healthier consumption alternatives.

Generally, these beneficial nutritional aspects of sheep’s milk are causing market experts to suggest a growing desire for sheep’s milk products suggesting a profitable future, though this will be dependent on developments surrounding certain plant-based milks, particularly their costing. As such when considering growing the dairy sheep industry in the UK anything which could impact the quantity of milk and quality of milk would be highly detrimental.

A key concern across both sheep and cattle dairy industries is the impact on lost production and animal welfare associated with sub-clinical and clinical mastitis. Where bacterial pathogenic mastitis is concerned (of highest impact due to potential herd spread) in sheep the main agents are Staphylococcus aureus followed by Mannheimia haemolytica. Animal welfare impacts are associated with pain, feeding changes, loss of condition as well as mortality of both ewes and potentially offspring due to poor milk production. Economic impacts of mastitis are numerous including;

Staphylococcus spp can be transferred to sheep via animal handlers, visiting animals and the animal itself, which can also transmit bacteria from source to source by contact, bedding and equipment. ‘Total Viable Count’ (TVC), ‘Total Coliform Count’ (TCC) and ‘Somatic Cell Count’ (SCC) are all used as indicators of milk microbiological profiles, which are closely related to farm management practices on farms such as hygiene, the health of livestock, season and feeding management and general biosecurity. Despite these impacts, mastitis management control and susceptibility has undergone far more research in cattle than in sheep. One project looking to increase our understanding of mastitis and the bacteriological profiles of sheep’s milk is a ‘European Innovation Partnership Wales’ (EIP Wales) study taking place on a group of Welsh farms. The study, which is ongoing,  is investigating factors such as sheep breed, stage of lactation and selenium supplementation. The preliminary results found have backed previous research which suggested that ewes with high SCC produced poorer quality milk particularly for its role in cheese processing, suggesting treatment or removal of chronic ewes from a herd will have beneficial impacts. In their comparison between Friesland and Lleyn breeds, they found positive affirmation of the use of the Welsh Lleyn breed towards cheese production moving forwards. One area which the study dismissed quickly was the role of nasal mucus as a reservoir point for S. aureus. Whilst the number of animals tested and rigours of this study were lower than previous research the lack of correlation between nasal bacteria and mastitis, if found to be true, would make management and control easier in these systems. Selenium levels were found to impact milk protein profiles.

S. aureus is of particular concern as it can not only have impacts on animal health and productivity but it can also impact humans by causing infections, food poisoning and pneumonia. Due to intense antibiotic use in both humans and livestock many multi-drug resistant strains of S. aureus exist making control even more difficult. Furthermore, this species is the cause of concern surrounding hospital superbugs Methicillin-resistant S. aureus (MRSA) and thus should receive particular attention in its research and control.

Control for mastitis and the bacteria associated in sheep can follow similar procedures as those highlighted for cattle including;

Identification can involve a combination of physical and visual inspections by farm staff as well as diagnostic tools such as milk bacterial counts, discussed previously, as well as potential protein marker diagnostics and even simple proxies such as fat to protein ratios which fluctuate with changes in SCC. If precision milk monitoring tools continue to be optimised for sheep dairy farming as they increasingly are for cattle then this could act as an improved method to analyse individual milk SCC counts and yields and identify infections on a mass scale with minimal labour. Similarly, as in cattle, infrared thermography (IRT) has been indicated to have the potential to identify infected udders in sheep as a future diagnostic tool.

Nutrition is also known to impact disease development and susceptibility as well-nourished ewes will better be able to fight infections, this is bolstered by links between low body condition scores and increased mastitis prevalence. Specific deficiencies in selenium and vitamin A have been associated with increased subclinical and clinical mastitis as well as reduction of digestion enzyme activities in the rumen which can impact feed conversion efficiencies. As such grazing forage options should look at providing a balance of vitamins and minerals as well as sufficient calorie intake as well as considering specific regimes of supplementation particular for dairy ewes over meat animals.

The culling of high SCC chronic suffering ewes is one route to control mastitis and improve dairy productivity. In the future genetic selection towards ewes resistant to mastitis, with lower general SCC profiles may improve systems further. Other genetic selection and breeding concerns should relate to udder conformation in future milking herds. It is known that different teat conformation can impact the ease of milking, reduce teat damage associated with infection as well as being suggested to play roles in influencing the likelihood of mastitis development. Finally, maintenance of correct cold storage/transfer conditions throughout the food chain post milking has been indicated as a key control strategy in avoiding human impacts of S. aureus downstream from sheep dairy systems.

The UK sheep dairy industry is significantly smaller than the majority of other EU countries despite growing trends of uptake worldwide. Due to sheep’s milk profiles showing many human health benefits, it is seeing increasing interest from consumers and can act as an alternative/supplementary option for livestock farmers. Research even suggests there may be increased benefits to processing sheep’s milk cheeses with raw non-pasteurised milk so this could be a route worth exploring for unique branding of health benefits (ACE inhibitor activity, immunomodulating, consumer digestibility,  beneficial bioactive peptides and consumer desired “functional” foods) associated with sheep cheese products. Although subsequent considerations of increased infection risks will need to be balanced for public safety. A major obstacle in increasing the production of UK sheep’s milk is controlling mastitis, as this will likely cause similar issues as in cattle where it is the leading cause of milk productivity loss and economic disease losses. To control this better more evaluation and research of sheep specific infection issues are needed as most current research focuses on cattle. However, it is also worth noting that figures suggest at a purely quantity based level cow’s milk (1kg milk = 2.4kg CO2-­equivalent) does appear to have a lower GHG impact compared to sheep’s (1kg milk = 3.78kg CO2-­equivalent) in initial studies (corrected for fat and protein levels). As such moving forwards with agricultural sustainability in mind the value of quality over quantity and considerations around management towards reducing environmental impacts may also need to be considered carefully.