Strategies and technologies towards reduced lameness in cattle

Lameness is considered one of the most detrimental diseases (behind reproductive issues and mastitis) currently affecting the dairy industry globally. Associated economic losses include reductions in milk production, limited reproductive performance and increased animal mortality, emphasised by escalated levels of animal culling. Lameness in cattle is defined as any variation/defect which causes abnormalities in a cow’s gait and can include a variety of leg and foot conditions. However, studies suggest 90% of lameness is directly related to diseases of the foot. Diseases of the foot are split into infectious and non-infectious diseases, of these, previous research has suggested that the most commonly occurring are sole ulcers, with an estimated individual cost of £518.73 per case, followed by white line disease estimated at £300.05 per case. The most prevalent infectious disease, on the other hand, is suggested to be Digital dermatitis (DD), though estimated costs per case for this are low, £75.57 per case, it is, however, highly contagious and therefore poses a further risk to the herd as a whole. 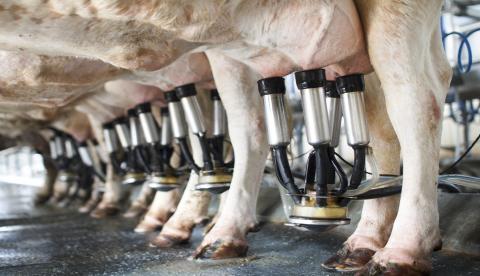 The prevalence of lameness in dairy cattle has been difficult to assess, however trends suggest that despite increased understanding of the economic impacts, the adoption of strategies to reduce lameness is low, with average levels across England and Wales  showing minimal reductions within the last 10 years (36.8% in 2010 and 31.6% in 2018). In comparison, evidence from multiple scientific studies has shown significant variance in lameness prevalence worldwide, ranging from <5% in Norway up to >50% in parts of the US with a suggested global average of around 25% reduction. As such, it is clear to see that lameness is still an important issue within the UK, with the cattle sector demonstrating above-average global prevalence. Furthermore, across multiple studies within the UK, a large variance in levels of prevalence between farms have been observed, from as low as 6% on one farm to 65% on another. This suggests that individual farm management strategies likely play a crucial role in lameness prevention.

Economic impact assessments of lameness in dairy cattle, or cattle in general, are a difficult concept to accurately measure as factors which are influenced by lameness are varied. However, determinations of expenditure and losses are regularly performed and readily available. Expenditures include; increases in labour, the requirement of specialists’ time (hoof trimmers or veterinarians), purchasing of therapeutic treatments, potential costs of diagnosis and costs of implementing control and prevention strategies. Losses associated with lameness are linked to reduced returns including: loss of milk production, lower-quality milk, non-saleable milk (due to antibiotic use), reduction in reproductive performance, increased culling, reduced animal welfare and a general reduction in health, potentially increasing susceptibility of lame animals to other diseases or complications. Figures generated in 2009 calculated losses  to the cattle industry in the UK of >£127 million, with individual cases costing on average £323.47 each, with around 10% of culls associated with lameness. An issue that has previously been highlighted is the lack of understanding by farmers/producers of the true costs associated with lameness; it’s suggested this leads to a cycle of reduced efforts placed into prevention and control and therefore overall higher economic impacts.

Through evaluating the impacts of lameness within the dairy industry, a large amount of data has been collected and analysed to assess factors which may be influencing lameness.

Factors which may increase lameness:

Factors which may decrease lameness:

Understanding factors which may have an effect on lameness can give researchers an indication of elements to investigate further and farmers information on farm level changes which could be implemented.

Due to the understanding that lameness has such a high impact on cattle welfare and productivity, several research trials have looked to find effective and novel strategies to combat it. Research over the past 20 years has looked at the effects of supplementation of cattle diets with biotin in order to improve foot health. Several studies have found positive correlations between a biotin-supplemented diet and reduced cases of DD, as well as other lameness diseases. Milk production has also been shown to increase under these conditions. Due to these beneficial effects, biotin supplements are now commonly available to buy to fortify traditional feed.

A relatively newly proposed strategy for combating DD related lameness involves feeding trace minerals (such as zinc) to cattle. To date, no specific evaluation of DD levels in relation to trace mineral consumption has been carried out in dairy cows. However, in the case of steers, research has proved a positive correlation. In at least three studies, trace element feed mixes, which provide increased levels of trace minerals, proved effective at reducing occurrences of DD lesions. Potential secondary benefits are associated with this strategy as other research suggests that increasing trace mineral levels also stimulates increased milk production. Finally, this strategy has  been studied in combination with biotin supplementation and in dual treatment experimentations, benefits to both hoof health and milk production have been observed simultaneously.

Biosecurity is becoming a more prevalent issue within the agricultural industry, particularly, where cattle are concerned, with regards to the reduction of diseases such as bovine tuberculosis. However, as noted, a significant proportion of lameness in dairy cattle is associated with infectious agents. As such, a reduction in the transmissive ability throughout farm systems via biosecurity measures could vastly improve lameness control. Studies have isolated ‘hazards and critical control points’ (HACCP) associated with lameness which should be considered including: poor management of biosecurity breaches through lacking a closed herd system, low biosecurity between age groups, contamination of equipment and a lack of hygiene/disinfectant between lameness treatments.

Improvement of diagnostics is noted across multiple lameness studies as an essential requirement in increasing treatment efficacy and, thereby, reducing animal welfare and economic burdens. A regular finding of diagnostic research in dairy cattle is the underestimation of lameness presence by farmers even when regular daily or weekly routine analysis is performed. This underestimation of the risks may be linked to a general overestimation of the effectiveness of new or current diagnostic techniques, where there is often a lack of a consistent “best available” reference test for comparison. Due to the multifactorial nature of lameness, no single test is likely to offer high robustness across all lameness associated ailments. However, one improvement with regards to diagnosis which has been noted is simply the use of  routine claw trimming and routine locomotion scoring with shorter durations between testing events demonstrating higher lameness reductions. Claw trimming provides an opportunity for visual inspection, allowing early-stage lesions to be diagnosed and treated, whilst locomotion scoring often leads to skewed diagnosis for the worst lameness cases only. Some evidence does, however, note that the cost-effectiveness of frequent trimming should be balanced against specific lameness incidence levels at each farm. Furthermore, there is a significant amount of work being undertaken to try to reduce the labour burden and inevitable human error associated with manual diagnostic assessments by utilising new technologies. Automated technologies still encounter issues of inefficiency due to the lack of a “best available” reference test; yet studies have suggested beneficial effects. The three main categories of automatic lameness detection technologies fall into are (1) kinetic (measuring forces applied), (2) kinematic (measuring the mechanics of animal movement) or (3) indirect approaches (often look at pattern changes from sensors applied). Kinetic examples include the use of pressure plates or platforms in parlours or integrated into automatic milking systems, which can detect abnormal weight-bearing by animals. Kinematic systems use cameras linked to algorithms that can detect abnormal cow gaits automatically and flag these for attention. Indirect approaches include technologies such as: infrared thermography (measuring inflammation causing temperature changes in hooves), GPS tracking (which can observe changes in behaviours), and on animal cattle monitors (SCR Heatime, Silent Herdman and Rumiwatch). Indirect systems measure various parameters and can use a change in pattern from normal behaviour to flag up potential illnesses which can include lameness. 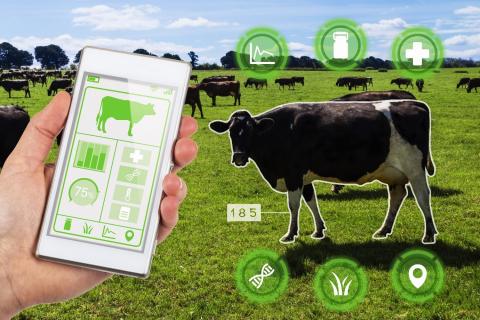 Due to increasing understanding of the economic and welfare costs of lameness, an emerging strategy has been the launch of healthy hoof/feet programmes backed by key industry bodies. Programmes look to provide information and resources for farmers, towards assisting in reducing lameness prevalence. Such programmes are often facilitated by mentors/experts to give tailored advice or training. Examples of programmes include; ‘Healthy feet programme’ (UK - AHDB), ‘Healthy Hoof programme’ (New Zealand - DairyNZ) and ‘Master Hoof Care’ (USA - Iowa state university college of veterinary medicine). Whilst it will likely be beneficial to have strategies aimed at combating lameness, to date there is a lack of direct assessment of the quantitative effects these programmes are having on lameness in dairy cattle within their regions.

Finally, a potential strategy for combating lameness within dairy herds is through financial incentives/penalties, it is hoped that these may encourage increased lameness diagnosis and treatment. For example, in Holland, milk produced by severely lame cows was prevented from being collected for sale (linked to European parliament regulation EC 853/2004 from the Farm Animal Welfare Council FAWC). Subsequently, Holland is currently one of the countries with the lowest prevalence of lameness, suggesting strategies such as this may have played an important role in changing attitudes towards lameness control. Currently in the UK, similar strategies appear to be affecting the diagnosis and treatment of mastitis as similar legislation is in place with regards to milk quality (high somatic cell count is related to mastitis presence) where milk over certain thresholds is deemed “unfit for human consumption”. 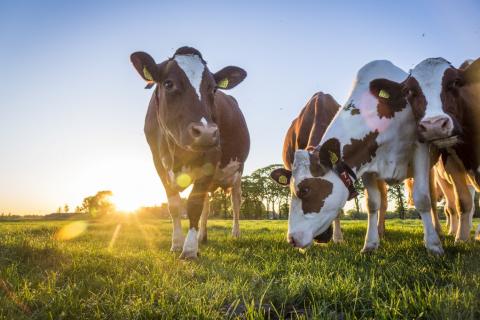 Lameness in dairy cattle is both a UK-wide and worldwide disease of high concern. Prevalence in the UK remains above the global average rates, despite evidence of decreases in the last 10 years, and increased awareness of the economic and animal welfare effect this condition has on cattle. Lameness presents a significant challenge due to its multifactorial nature and, as such, each case must be specifically assessed in order to provide the best treatment and inform farm management responses accordingly. Whilst evidence suggests increased communication with regards to the importance of lameness control (through specific programmes), there appears to be a continued lack of awareness of the true costs, both economic and animal welfare-related, within the industry. Though some novel treatments and diagnostic tools are being developed to assist farmers with lameness control, evidence suggests that simple changes to frequency and accuracy of lameness observations alongside regular hoof care may allow for the highest diminishment in cases for the lowest financial input.