The use of sexed semen in the dairy industry, and sometimes in the beef herd, has been revolutionary in improving efficiency and the economics of farm businesses. From avoiding the production of surplus male calves to reducing biosecurity risks when buying in replacements, sexed semen has substantially improved the profitability of European dairies, particularly those with high replacement rates. The science behind producing sexed semen is fairly straightforward as in cattle, a sperm carrying the X-chromosome contains 3.8-5% more DNA than a Y-chromosome bearing sperm providing a reliable criterion to distinguish between the two. A harmless, fluorescent dye capable of penetrating the cell membranes to access the DNA is used, so that sperm containing more DNA and therefore an X chromosome fluoresce more brightly. The sperm are then sorted on a large scale using a flow cytometer – a machine that rapidly (up to 15 million cells per hour) and automatically detects different types of cells and sorts them accordingly, in this case by adding a positive or negative charge to the containing water droplet. Positively charged sperm droplets will travel to a negatively charged container and vice versa allowing quick and easy separation. Whilst there are other methods, flow cytometry is the most reliable, providing purity of around 90% and has been successfully commercialised in Europe, the USA and beyond. 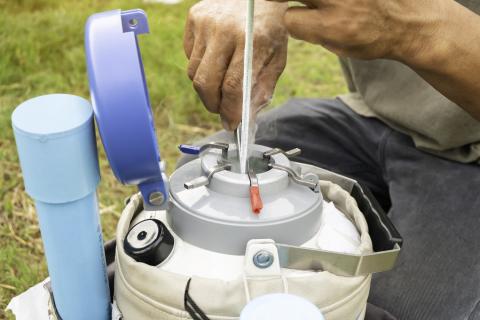 In general, the use of AI has been known to slightly increase the probability of producing a male calf compared to natural mating so the primary reason for using sexed semen is to negate this risk. Heifer calves are required for both replacements and herd expansion and may also be sold when there is a surplus. Simultaneously, by reducing the number of male calves produced, sexed semen can minimise the occurrence of dystocia by around 20% as heifer calves are smaller (by around 2.5 kg) and easier to calve. This reduces calf mortality, improves cow fertility and can impact the running costs of the business through reduced labour requirements. As previously mentioned, one of the greatest causes of infectious disease on-farm is the incorporation of new, replacement heifers. Producing replacements from within a closed herd can mitigate the risk of buying in disease and also ensures the quality of new stock when selectively breeding from high genetic merit animals. In a dairy herd, for example, there is the opportunity to inseminate cows of the highest genetic merit with sexed semen to generate replacements whilst putting the rest of the herd to a beef sire. The use of sexed semen also presents the option for increased genetic gain in a herd – that is, selectively breeding the best to ensure optimum performance. A wide range of genetically proven bulls are available and can be selected to complement the dam and the farming system. This strategy has been shown to increase the rate of genetic gain by around 15% in dairy herds.

However, the fertility of sexed semen is known to be lower than non-sexed, likely because: a) there are fewer sperm contained in each insemination and b) the potential for damage during the sorting process. The use of an additional dye to detect damaged and dead sperm cells at the sorting stage is possible but may increase the cost and affect the speed of the process. Alternatively, the sorting process may be revisited to lower pressure inside the equipment, reducing damage, but again, this will come at a cost. Overall, it is estimated that under good management, sexed semen has a pregnancy rate of about 80% of conventional, non-sexed semen, though in herds that are very well managed this could be as high as 94%. One US study using Holstein cattle found that the mean conception rate for heifers was 56% for conventional semen and 39% for sexed semen; in cows, this fell to 30 and 25%, respectively. However, the use of sexed semen did significantly reduce dystocia: by 1.7% in heifers and 1.6% in cows. Difficult births, in general, were reduced by 28% for heifers and 64% for cows with sexed semen use.

Some herds have seen even better results using sexed semen alongside genomic testing of heifers/cows. As genotyping is already commonplace in bulls there is an opportunity to increase selection accuracy and intensity on the female side. Whilst not combining the two methods, one EIP project applied genomic testing to dairy heifers and evaluated the resulting genetic gains and financial return. This project found that the genetic gain achieved using genomic testing equated to roughly £20.64 per animal and the total economic benefit of testing was £19.39 per cow. In addition, genomic testing revealed that around 5% of the herd had mis-identified sires on their pedigree which could have led to incorrect pairings. Overall, the project highlights the potential benefits both in profits and in herd improvement when using genomic testing on heifers.

Several studies have evaluated the cost of using sexed semen and used simulation models to predict whether this investment would repay itself in the future. It’s important to remember that there are a huge number of variables that could affect the outcome of these experiments – fertility, management strategies, infrastructure, use of technologies, milk prices etc. – nevertheless, studies have been able to offer some recommendations. One study looking at the use of sexed semen on a dairy herd found that the most influential variable in this situation was the price of dairy heifer calves and that using sexed semen primarily on heifers and also on some genetically superior cows was the most profitable scenario. Targeting non-replacements to beef or dairy should be done based on expected relative prices to achieve the best outcome. An Australian study factoring in the use of genomic testing of heifers and sexed semen found that there was a net benefit of genomic testing of up to AU$1,124 (approx. £600) per 100 cows, per lifetime. When sexed semen and genomic testing were combined and used on heifers this gave a beneficial outcome, though changing various parameters affected this result. Again, it was found that the price of heifers was the most influential factor.

Another recent European study investigated the effects of using sexed semen whilst simultaneously breeding to a beef sire. Farms with lower stocking densities needing fewer replacements and therefore having more surplus heifers to sell benefited the most from this strategy, though farms with higher stocking densities benefited from the sale of beef cross calves. Overall, the combination of sexed semen and crossbreeding to beef increased profits from €0 to €568 (£485) per cow per year, with an average of €79 (£67.50). The magnitude of benefit varied between individual farms, suggesting that a flexible approach tailored to each farm’s circumstances is best when implementing sexed semen and/or genomic testing. 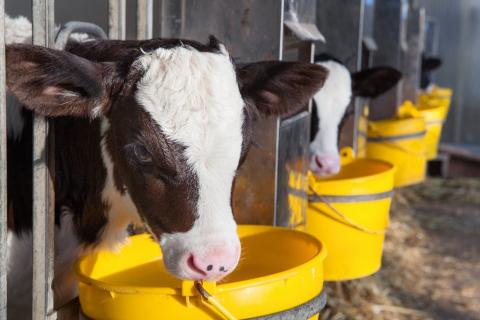 On the other hand, the uptake of AI is much lower in beef enterprises compared to dairy, as is the use of sexed semen. Nevertheless, in beef systems that do use AI, sexed semen could be used to breed female offspring with strong maternal traits and male offspring with strong terminal traits, or could be particularly useful in the maintenance of rare, pedigree breeds. Though, beef production systems will only profit from this strategy when a return can be made - a feasible situation as the cost of sexed semen and other genetic technologies continues to decrease.

The uptake of new genomic technologies has revolutionised the dairy industry and sexed semen has contributed to those improvements. Offering the opportunity for rapid genetic gain, a reduction in dairy bulls, fewer difficult births and the option to breed genetically superior sale or replacement heifers. However, many studies highlight the lower fertility of sexed semen – on average 80% of conventional semen – either due to damage incurred during sorting or each straw containing fewer sperm cells. Some suggest that this could be boosted to 94%, though this remains a worry as one study found reductions in conception rate when using sexed semen - -17% for heifers and -5% for cows. Nevertheless, economic simulations have found the use of sexed semen in dairy setups to be beneficial, mostly through the sale of surplus heifers. Of course, results vary according to farm type and studies suggest that a flexible approach tailored to each farm is best when looking to implement sexed semen and/or genomic testing. Another important factor to consider is the price of heifers and beef cross calves – farmers may opt to produce more surplus heifers whilst prices are high, or vice versa, to maximise returns. In beef herds where the use of AI and sexed semen is low, we may see more uptake as the technology becomes more affordable. This could allow the selective breeding of replacements with strong maternal traits and bulls with good terminal traits which could serve to improve profitability.