The map below is an ‘erosion risk map’ of Dolygarn farm (sometimes more accurately described as a ‘water connectivity map’), where the risk of run-off is calculated on the basis of slope, rainfall and connectivity to water and assumes a high risk scenario e.g winter grazed brassicas. The red areas show the higher risk areas, where you might see overland flow of water, with the dark blue areas showing the lowest risk areas, i.e. it would be sensible to choose low risk fields for brassica crops (where possible). Sensible farm management practices within the pale blue and yellow areas of the map and good infiltration will reduce flow in the red areas. The notable omission from the calculation of risk using the SCIMAP model is soil type which has a significant bearing on run-off risk.  It is important that farmers take all possible measures to reduce the risk of soil and nutrient run-off when planting and grazing brassica crops.

The two fields used for this demonstration site project are on a bank and the yellow and pale blue lines indicate risk of run-off. The Clampsaver field has a gully that runs with water in wet conditions/winter. 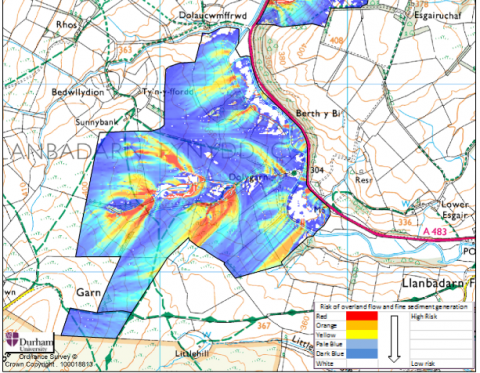 This field is a long slope but soil is relatively free draining. You are likely to still see run-off during significant rain events, particularly when there is no ground cover and surface is poached from grazing stock. Brassica Express is a turnip mix so once the tops are grazed the soil is exposed and vulnerable to poaching and compaction which reduces infiltration rates and increases risk of run-off.

This is a shorter slope than the other field so will generate less run-off but it is a wetter field with a spring above it and a gully on the yellow line which runs wet in the winter. The Clampsaver mix includes Italian Ryegrass and Berseem clover with rape, so even when the rape is grazed-off there are roots and shoots in the soil which helps protect it from poaching and compaction and reduces risk of run-off.

When we are working with farmers to reduce run-off risk, we recommend alternative crops such as rape/Italian Ryegrass (IRG) in preference to straight turnips because it reduces erosion and run-off risk which helps protect water quality. There is also a benefit for natural flood management too as protecting soil structure, helping water to filter in rather than run-off the surface, slows the flow of water to the rivers and reduces flood risk. Below are some top tips to protect soil under brassica crops.

Bridie Whittle from the Wye and Usk Foundation is working with us on this project, and visited Dolygarn on two occasions during autumn/winter 2020/21 to carry out basic soil assessments; scoring structure, infiltration testing and worm counts. The expectation was that there would be more worms, better structure and quicker infiltration in the Clampsaver, because of the diverse crop cover and complex root systems which remained on and in the soil, even after grazing. Although the testing methods were not scientifically robust, they provided useful discussion points to add another dimension to this project. The results, along with Bridie’s comments to discuss the results can be seen in Table 1.

“The crops were established using discs and I only dug a spade deep, so when I went in September I was looking at soil that had been mechanically disturbed with no evidence of compaction and had developed a natural structure. When I went back in December it was tighter, as expected after some grazing. Grazing in both fields was well managed with lambs moved through paddocks and there had been no extreme rainfall events. I hope to have a look again in the coming weeks – later in the season and following this recent very wet period to see if there is a difference”.

“Infiltration was measured using the single ring (drainpipe) method, measuring the time taken for 1” of water to drain into the soil. This method is far from perfect, but was the best method available at the time. At the first assessment in September I did 10 tests in each field but at the second in December because they were taking so long to drain I only did 5. There was a significant difference in the results at both assessments but not in the direction I would have expected. I think this is a really interesting area for further study, particularly since the single ring infiltration methods is widely promoted to farmers as a way of assessing their own soil health."