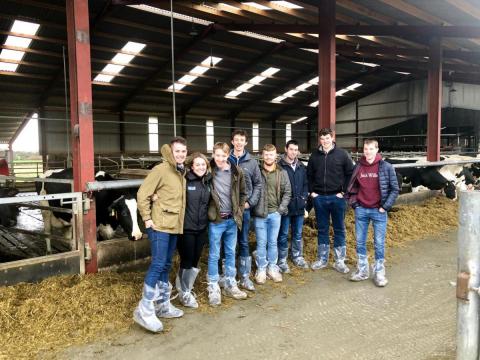 The group, led by Cath Price, travelled to Belfast for a three-day agriculture visit using Farming Connect Study Visit funding.  Already part of an Agrisgôp group, members wanted to explore farming practices in Northern Ireland and hear from progressive farmers who were willing to share their experiences within the industry.

First up was a presentation from Neville Graham, Head of Farmer Services at Dale Farm. Neville provided an insight into Northern Ireland’s dairy sector and explained how their company operates. The leading dairy company is owned by a cooperative of 1,300 dairy farmers and employs more than 1,000 people.  The company operates a very integrated supply chain having a number of strands, for example, a feed milling business and a farm liaison service. The company offers a number of price packages for farmers including a fixed milk price and bonus schemes.

Group member, Ben Davies said: “I was pleased to hear that the company takes a responsible approach to increasing milk production.” Neville explained the business is increasing its demand for milk and are encouraging farmers to increase slowly by providing a bonus on extra milk produced over a number of years.

After lunch the group headed to County Antrim to the country’s Agricultural College, CAFRE (College of Agriculture, Food and Rural Enterprise).  There they were greeted by Farm Manager, Michael Graham and Assistant Farm Manager, Jim Fulton who showed the group their Dairy Centre.  The agriculture department operates across three units; dairy, beef and lowland sheep and a hill farm unit where sucklers and a 1,000 head commercial flock are kept.  Michael and Jim took the group around the dairy farm showing them the parlour, maternity wing, calving pens, feed and resting areas and calf and youngstock units.  Group members were impressed by the systems in place to protect worker safety, for example, regular squeeze gaps in pens and handling systems and individual cow holders to calve cows safely and calmly.  Other elements of the farm that impressed the group were the ventilation systems, cleanliness of the farm and the building set ups.

Group member, Sion Watkin said: “It was good to see that students were the main priority, with innovative equipment and handling facilities available for students to learn with which clearly had user safety and animal welfare as high importance.”

After re-fuelling in Belfast overnight the group were raring to go again.  They headed to County Armagh to visit Farmers Weekly Mixed Farmer of the Year 2018/19, Matthew Brownlee to hear about his mixed farming business.  Matthew kindly welcomed the group into his home and described his background and role and explained how his businesses are structured and operated.  Across a mixture of owned and rented land, Matthew has a suckler herd, finishes store cattle and in the last three years has entered into pigs and dairy; building two pig units which stock a total of 1,200 pigs and a dairy herd currently milking 65 cows with ambitions to increase to 120 cows.  When asked, group members felt the key take-home messages from listening and seeing Matthew’s approach to business were:

The final stop of the study visit was to County Antrim where the group met calf rearers Gary Fitzpatrick and John Toland.  The main aim within this farm business was to keep calves sourced from multiple farms healthy and achieve outstanding performance.  Gary said that when they started the business, banks wouldn’t lend them any money as no farmers were making money from black and white calves; this meant the pair had to develop the business slowly and find ways of making it work.  They concentrated on developing the rumen well in early stages which would then strengthen the immune system.  The pair were rearing 15,000 – 16,000 calves a year. Sourced from mainly dairy farms across Northern Ireland, the calves would then be exported or finished/slaughtered in the UK.  From the visit members learnt that ventilation was a simple yet effective way of improving calf health relatively quickly and cheaply.  They were also impressed with how adaptive both Gary and John were, constantly willing to make changes and trial products and equipment to improve their process.

Gary and John’s approach to business was particularly useful for group members.  Gary asked if the group tested their silage - most replied with a ‘yes’.  He then asked if group members tested their bought-in feed, which they all replied ‘no’.  He said: “So you trust someone else; but you don’t trust yourself.”  He made a very valid point and explained that, from his experience, it’s worth doing.

Group member, Hywel Bennett said: “Gary and John’s focus on early development to maximise performance got me thinking and although we were discussing calf rearing, the same principle applies to the likes of myself running free-range laying units.  I feel I should be rotating my time between flocks and prioritising my time to be with flocks during the first period of lay instead of looking after one flock until end of lay; this is a change I will be making.’

On a more general note, the group found it interesting to travel around Northern Ireland; seeing the land, farm set ups and houses.  The group noticed that average farm sizes were much lower in Northern Ireland compared to mainland Britain.  They were also surprised how high land prices and rent prices were in comparison to mainland Britain.  From speaking to farmers, it seemed you wouldn’t find much land under £10,000/acre for sale and host farmer Matthew Brownlee noted his area was the most expensive county in NI, with average land prices at £13,500/acre.

Spending time visiting other businesses can be a valuable way to discover improved methods of working, see best practice in action and bring home new ideas to innovate your enterprise.

Groups of eligible farmers and foresters can apply for a maximum of £3,000 per group to fund a study visit within the UK for a period of up to 4 days.

Each group must submit an application form to request funding and is expected to keep a record of its findings to share with others on their return.