The fat-tail sheep and its introduction to Wales

The fat-tailed sheep is an unusual type hailing from North Africa and the Middle East, characterised by large fatty deposits on their hindquarters and/or tail. This type is a multipurpose sheep, used in its country of origin for meat, milk, wool and most notably, their fat, which is commonly used in traditional Arabic cooking. Fat-tailed sheep encompass approximately 50 different breeds which often contain regional variation making for a highly diverse population. The fat-tail sheep is hardy, able to tolerate hot, arid weather with elongated periods of drought and it is thought this is where the fatty deposits play a role. It is assumed that the fat deposits serve as a reserve for the animal during migrations and winter, almost like a camel’s hump. The sheep can metabolise the fat to use as a source of energy when food/water is scarce. Under favourable conditions with ample food and water, fat-tail sheep can reach large sizes but in physical appearance look almost akin to a goat. The type is characterised by having either coarse wool or hair, long droopy ears, a slender frame with long legs and rarely exceed 100 kg in weight. Fat-tail sheep are well known for their mothering abilities but produce on average 1.5 lambs per year with the majority producing a single lamb per year. Whether this may be improved by flushing a few days prior to tupping is yet to be seen. Depending on the breed, ewes may be seasonal or unseasonal (polyoestrous) breeders, the breeding interval of a Damara ewe may be as short as 8 months whilst the Awassi breed is a strictly seasonal, short-day breeder, producing one crop of lambs per year. 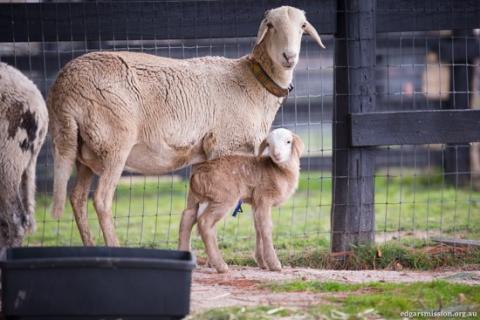 Some fat-tail breeds have been selectively bred for milk, such as the Awassi, which are traditionally milked twice a day after lambs have been on the ewe for approx. 2 months. Depending on the management system, “unimproved” Awassi ewes can produce anywhere from 40 to 80 kg of milk per 150-day lactation, in addition to the milk consumed by lambs. On the other hand, the improved Awassi breed, developed using stringent selective breeding programmes, can range from 97 to 360 kg of milk per lactation.

The fatty deposits on the tail and rump have been enhanced by selective breeding over many years as this characteristic plays a key role in the eating qualities of the meat.

In UK breeds (or ‘thin-tailed’ sheep) fat is usually deposited around the internal organs and under the skin unlike in fat-tailed breeds. Whilst taste is a subjective trait, the meat of fat-tailed sheep is said to be more tender and juicier than in thin-tailed sheep. When the fat-tailed Chall lamb was compared to the thin-tailed Zel breed, it produced a higher omega-6: omega-3 fatty acid ratio, but a lower polyunsaturated fat: saturated fat (PUFA: SFA) ratio (these are important factors influencing human health, particularly cardiovascular disease). Overall, it was determined that the fat-tailed Chall was leaner and offered a more favourable fatty acid profile than the thin-tailed species, but at the cost of eating quality. In support, a study comparing the carcass traits of two fat-tailed breeds to their crosses with thin-tailed rams found that the daily gain and feed conversion ratio in crossbreeds were higher, but that the fat-tailed lambs provided better quality lean meat with a lower percentage of intermuscular (IM) fat (average 9.5% IM fat in crossbreeds and 6.8% in the fat-tailed breeds). As expected, the study also found that crossbreeds produced 3.7% more subcutaneous fat than the purebred fat-tails, and 11.5% more internal fat.

It has been established that the fat from fat-tailed breeds is different from that found in thin-tailed breeds, in that the body fat has a lower melting temperature, is soft and oily and a translucent yellow whilst the tail fat is white and hard (more similar to fat found in thin tailed breeds of sheep). When put to the test, fatty acid profiles were very similar between Damara, Merino and Dorper lambs, all aside from the branched-chain fatty acid content. Branched-chain fatty acids are considered to be ‘bio-active compounds’ as there is evidence that they can improve intestinal health, especially in newborns, and may play a role in reducing cancer risk. The branched-chain fats in the Damara tail totalled 8.8% of total fat, but of this, 77% consisted of uncommon structural isomers (known as mono- and di-methyl branched fatty acids). Analysis revealed that some of these unusual branched-chain fatty acids were also present in Damara muscle, suggesting that as the animal’s feed was restricted Damara lambs were mobilising and using fat from their tails – an interesting and unique metabolic trait.

Whilst fat-tailed sheep are native to hot, arid climates such as the Middle East, North Africa and parts of Asia, the Damara breed has been exported to other areas of the world, particularly Australia, aiming to produce lamb in semi-arid regions of the country. More recently though, an EIP Wales funded project run by Farming Connect has introduced the breed to Anglesey, Wales. This project aims to assess the suitability of fat-tailed sheep to the Welsh climate and to tap into a niche market with unique meat and fat.

Fat-tailed sheep have been known to thrive in arid climates as well as dry and freezing temperatures, such as that of the Mongolian winter. Whilst winter in the UK never reaches the freezing -30°C commonly encountered in Mongolia, it is certainly different to that found in the Middle East. As such, fat-tailed breeds would need to be crossed carefully with regional native breeds to ensure adequate insulation for the winter months, whilst retaining the characteristic fat tail. This has been done with success in Southern Australia, where fat-tailed Damara rams were bred with Wiltshire Horn ewes, producing a robust, meaty animal with a shedding coat and fatty tail. It is particularly important to ensure adequate insulation, shelter and access to good forage to prevent the sheep from utilising the fat stored in its tail and rump – arguably this breed’s most important characteristic.

The current EIP project has successfully produced purebred Damara lambs via embryo transfer and crossbreeds using imported semen and artificial insemination (AI) on Romney, Texel x and Lleyn x ewes. Embryo transfer produced 6 purebred Damara lambs ranging in birth weight from 3.3. to 6.2 kg whilst AI resulted in a total of 72 lambs with slightly heavier birth weights ranging from 2.5-8.0 kg. The lambs were born in 2020 and have coped well with the Welsh climate thus far, though they do need to be kept inside during winter. The project has successfully produced the first purebred Damara rams and ewes as well as crosses in Wales. The group will now work on developing a route to market in the UK for these unique lambs.

Fat-tailed sheep are a unique type, consisting of many different breeds, all of which are characterised by a despot of fat either on the rump or in the elongated tail. This unique feature is thought to be an adaptation to the harsh, arid environment that they originate from, allowing the sheep to mobilise fat from the tail when conditions are challenging. This results in a unique lipid metabolism and extremely lean meat. The storage of fat on the rump/tail is also distinctive, containing high levels of unusual branched-chain fatty acids that may be beneficial in human health. The fat from fat-tailed sheep is important in Middle Eastern cooking and our diverse range of cultures in the UK means that there is now a demand for this fat and therefore a market for the breed. Fat-tailed sheep are well adapted to arid environments which may render them unsuitable for farming in the UK. A potential solution is the careful crossbreeding with local breeds that are better adapted to the local environment – recently this has been done in Angelsey, North Wales where an EIP funded project has produced purebred Damara lambs using embryo transfer and crosses with Lleyn ewes using AI. The lambs have thrived in the Welsh climate and have left the project with the first purebred and cross lambs and ewes. The group will now work on getting these unique lambs to market and developing the Damara Môn brand.