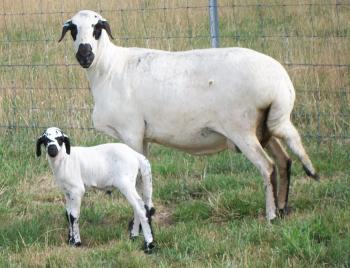 Fat-tailed sheep are a domestic breed known for their large ‘fatty’ tails and hindquarters. These breeds of sheep are commonly found in arid, desert-like areas such as the Middle East, Northern Africa, Northern India and Central Asia.  They are renowned for being able to thrive in harsh environments due to their ability to gain weight despite a diet that is nutritionally poor. The unique tasting meat and fat from these sheep are used in traditional Arabic cooking and is in high demand by ethnic groups here in the UK. The eating qualities of meat from fat-tailed sheep is said to be more tender, leaner and juicy than their thin-tailed cousins. It is also found that their meat has a higher Omega-3 to Omega-6 fatty acid ratio and lower in saturated fat which are favourable qualities for human health.

This project will be the first of its kind to introduce the Damara, which is a breed of fat-tail sheep, to the UK market place and aims for Wales to be pioneering in the development of this breed of sheep. This three-year project, involving two farmers from North Wales, aims to investigate the feasibility of rearing both pure Damara and cross breeding them with Romney, Texel cross, and Lleyn cross ewes and monitor how well they adapt to typical milder and wetter Welsh conditions.

With over 1,000 sheep breeds recognised in the world, and approximately 60 farmed in the UK according to the British Wool Board, there is scope to look at more interesting genetic material as a way of diversifying from the conventional market.

The outcome of this project will demonstrate whether fat-tailed sheep can successfully be raised in Wales, provide indicative figures for growth rates and investigate the potential market size and demand for this highly valued niche product.