Champion butcher Peter Rushforth has not looked back since choosing an apprenticeship instead of going to university.

Last year, Peter, 22, from Leeswood, won a WorldSkills UK gold medal for butchery, the Meat Trades Journal Young Butcher of the Year title, represented the UK in a European Young Butchers Competition and was runner up in the Premier Young Butchers contest.

This year, the former Welsh Young Butcher champion secured a Meat Promotion Wales/Hybu Cig Cymru scholarship to study beef forequarter and related products in the United States and was named Higher Apprentice of the Year by his training provider, Cambrian Training Company.

Peter started working at Swans Farm Shop in Treuddyn, near Mold, at weekends when he was 15 and jumped at the chance to pursue an apprenticeship there when he left school with nine GCSEs and three A levels.

“The Higher Apprenticeship has really helped catapult my business understanding into another league,” said Peter, who is now in demand as a butchery demonstrator both in the UK and internationally.

“My apprenticeships have opened doors to many opportunities, such as competitions. I’ve developed my skills tenfold and they have motivated me to expand my skillset to be the best. 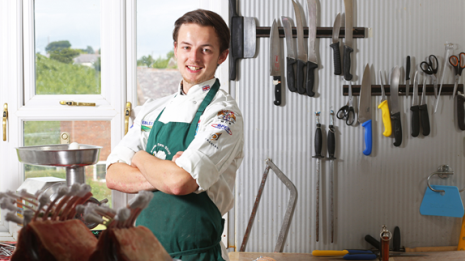 Higher Apprentice of the Year