The Eryri Young Farmers Club has been established for 75 years and supports young people in rural communities in the North of Gwynedd and Dyffryn Conwy. We provide a full programme of activities and various competitions throughout the year. Occasionally, members are given the opportunity to undertake visits to learn and see something different to what they see everyday.

Following discussions in an executive committee meeting in September 2017, a number of locations were noted that members were eager to visit. Following a short discussion and vote, it was decided to arrange a trip to visit farms in Scotland as well as attending the Highland Show to see how this show compared to the Royal Welsh here in Wales.

It was decided to visit three business: Wilson Farming, TK & G Robinson and the Yorkshire Shepherdess. We also decided to arrange a meeting with Scottish Young Farmers officials to discuss how they run the organisation without financial aid and how this could benefit Eryri YFC following cuts to our funding.

The main aims and objectives of the visit were to share ideas, see new schemes, develop ideas and socialise in a different environment.

A few changes were made to the itinerary a few days before the trip as we arranged a visit to the Holland House Farm Shop & Nurseries in Walton Le Dale. We had a tasty lunch in the café and a talk from the owners, Mr & Mrs Yarwood, about the work they had done in the small village. Alongside running a farm shop, café and plantation, they’ve renovated old school sheds on the outskirts of the village into a Gardening Centre. They had invested greatly in all three enterprises. The café used local food and the farm shop sold local produce. It was great to see low miles on the produce that arrived through the door. They also had vibrant gardens and sold the flowers grown.

We then went on to visit Wilson Farming in Samlesbury. This is what you call a machinery farm! The Wilson family had been farming here since the 1970s. Originally, the land only comprimised of an old chapel but the family bought the adjacent land and demolished the chapel to build a house in its place. There were several old buildings remaining which have since been renovated. This family was certainly not afraid to venture. One building had been renovated into an Events and Conference Centre with all necessary facilities for such use. It was clear that the contracting business was hugely successful too as they owned 28 Forage Harvesters – the highest number owned by one person in Europe! They no longer kept animals on the farm as they wanted to concentrate on the machinery and crop side of the business. He harvested 35,000 acres of crops annually with farms in Shropshire, Hertfordshire and Lancashire, employing 70 members of staff including his two sons. Mr Wilson had also built sheds for drying straw and crops during the summer and drying woodchip during the winter.

We had planned to visit TG & G Robinson but due to Mr Robinson being ill and the hustle and bustle on the farm as a result of the weather and silage season, we didn’t get to see much of the farm. Despite this, we were fortunate enough to see their slatted cattle shed with capacity for over 500 cows to be finished. They also kept around 300 heifers in this shed and little over 200 steers, with all cattle being sent finished to Dunbia in Preston. The majority of the cattle are bought in at 7 months old onwards.

We then continued our journey up to Carlisle for our first social night.

Lessons learnt during the first day:

We arrived at the show on Friday afternoon and everyone had a chance to walk around the showground before meeting with officials from Caithness YFC. After this, we went around the rest of the show before meeting to go to the hotel.

Lessons learnt during the second day:

We attended the Highland Show for a second day on the Saturday and members were free to do as they wished.

Lessons learnt during the third day:

As we didn’t visit anywhere specific, we didn’t learn anything specific on the third day. One thing that members did point out was that the security at the RWAS is much better than the security at the Highland Show. We had to cross a very busy road to go to the airport and the dance at night with little light and signs giving directions.

On the final day we began our journey home, stopping in Yorkshire to visit the Yorkshire Shepherdess on the way. After much walking, we reached Ravenseat Farm where we were welcomed by Amanda Owen.

It was very busy on the farm due to the nice weather. They had renovated an old barn into a shelter including a tea and coffee station for walkers who pass through the farm.

We had tea and cake and a talk with Amanda about raising a family of 9 on a relatively small farm in the Yorkshire Dales. Amanda encouraged all of the children to take in interested in farming with all of them having a role on the farm. She didn’t know if any of the children would want to farm in the future and she will encourage them to do what makes them happy. The farm was not enough to support the family. Amanda’s husband works full time in Leeds and she does everything she can outside the farm. As a former model, she does a lot of public speaking as well as writing books. This lifestyle kept her and her family happy although she did admit that things try her patience on the farm at times, such as the weather this year.

Lessons learnt during the fourth day:

We intent to hold a meeting in August to start planning for the next trip in 2019. One meeting was held immediately upon our return and members were eager to form a document noting what was learnt and what how it could help shape their future. The discussion also included going back to the Highland Show or attending the World Shearing Championship in France to see another country’s way of farming.

During the meeting in August we will create a summary and plan with the hope that everyone contributes and notes one idea that they will take away from the visit and implement at home. A number of us are on RWAS County committees and hope we will have a chance to report back on the Highland Show, the visits and minor points that could help the community move small things forward.

Every member who attended the trip has learnt something new that will benefit their businesses at home. As most members are in businesses with their parents, the parents tend to make the majority of the decisions within the business. Members have some convincing work to do before presenting new ideas to their businesses.

The most important things that members can do is put their plans on paper and try to gather evidence in terms of how they can improve their businesses and what could help. They will need to prepare a detailed breakdown of all elements as well as look back at the knowledge gained during our trips. Perhaps we need to be more entrepreneurial in terms of what we can do with our lands, Mr Wilson grew all types of crops on all types of land across the North of England. 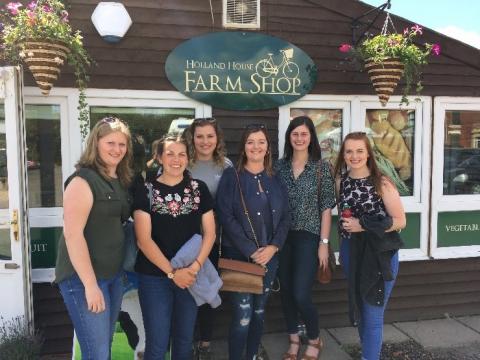 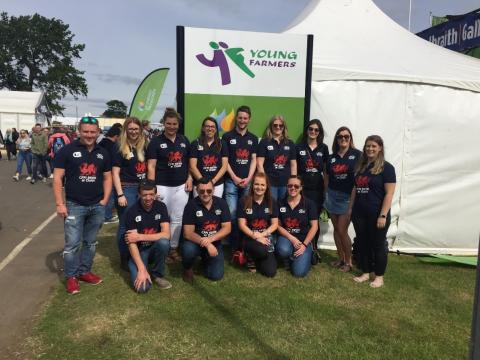