27 farmers from the Llangwyryfon area went on a study tour to Powys, Cheshire and Worcestershire. The aim of the tour was to give the farmers the opportunity to see a variety of different farming systems and to visit farmers that have won some of the most prestigious awards in British agriculture such as Sheep Innovator of the Year 2018, Beef Farmer of the Year 2012 and Grassland Awards. They decided to visit a variety of farmers from different sectors as the group includes a variety of farmers. The group hoped that seeing the various systems would inspire them to aim higher and to make changes to their own businesses.

The tour began with a visit to Upper Hall, Meifod, hosted by Alun and Helen Bennett and their two sons, Robert and Hywel and their daughter, Catherine. A warm welcome was extended by the family, who run a flock of 600 Lleyn ewes, a flock of Texel ewes, 120 Holstein cattle and a 64,000-bird poultry unit. Firstly, Catherine Price gave a presentation on the history of the development of the business, showing how the farm had developed in a number of different directions over the years and the role of each family member. Then, the group went to see the Texel ewes that were being prepared for market, before visiting the milking parlour. After lunch, the group went to see both the poultry sheds that were located on two different farms. 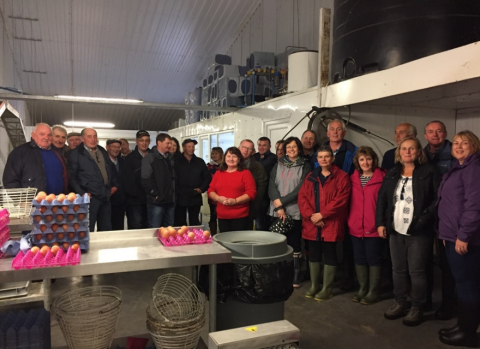 Figure 1. In the poultry shed

They then went on to visit Winnington Green farm, Middleton, hosted by David and Rachel Lee and their son, James. This was a dairy farm, milking 405 cows in a rotary parlour. This farm’s focus was on producing milk from grass and their main aim was to run a profitable business using a practical system. They have a herd of Jersey x Friesian cows as these are smaller and not as heavy to graze the fields. They only milk for 10 months of the year as they calve in a block during the spring. 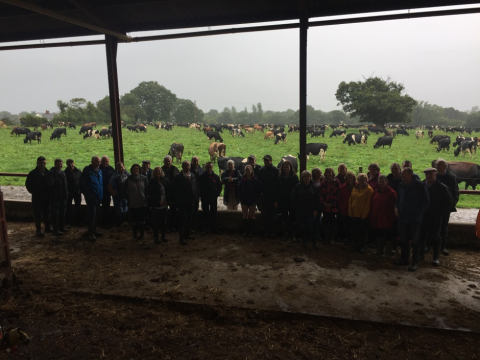 The group spent the night in a hotel near Wrexham before visiting Crewe Hall Farm, Crewe y Farndon, a dairy farm run by Evan Jones and his family. This farm was a pleasure to see, with 1,100 dairy cows all being housed with sand bedding. They had a 60-point rotary milking parlour and they milk three times a day. The farm’s vet joined the group to explain their animal health care system, and it was a pleasure to see the whole family taking part in the farm tour, from the youngest child up to the grandfather.

Figure 3. One of the sheds at Crewe Hall 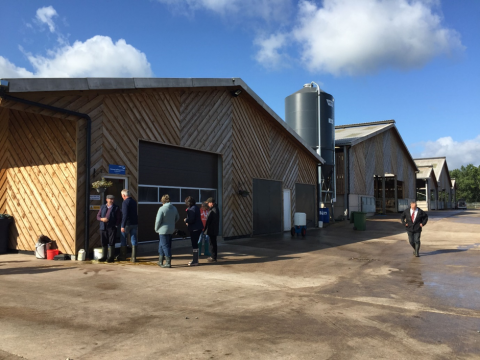 From there, the group went on to visit Mobberley Farm, Cheshire, hosted by Ian Norbury. He keeps a herd of 90 Aberdeen Angus cattle which he grazes on a rotational grazing system. His farm is located close to Manchester airport and planes were flying above the farm throughout our visit. This is one of AHDB’s strategic farms. As well as keeping cattle, Ian has also capitalised on his geographical location by renting some of the buildings to different businesses and renting a field as a wedding venue.

The following morning, the group visited Sam Jones’ sheep farm, Brookhouse Farm, Ham Green. Sam had won the Sheep Innovator of the Year award in 2018, and used new technology on his farm. His diversification enterprises sparked some interest, from the biomass boiler to the storage sheds. 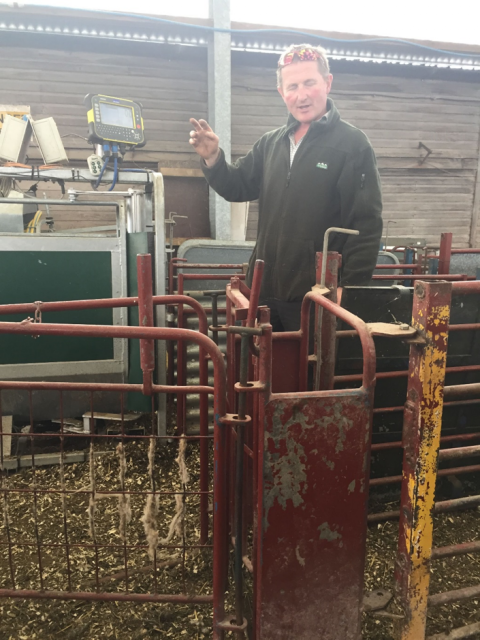