All three group members were selected by the Oxford Farming Conference (OFC) to participate in their Emerging Leaders Conference 2020. All emerging leaders also attended a pre-conference workshop and a trip to the US Embassy in London in November.

The first day of the conference explored the importance of diversity and inclusion in the agricultural sector, highlighting the need to encourage all sectors of society into the agricultural industry. By 2050, 36% of the UK population will be black or ethnic minority, but at present, less than 1% are employed within the industry. We attended a fringe event that explored the use of capturing on-farm data and linking it with a new Greenhouse Gas emission calculation via the Oxford Martin School. The emerging leaders took part in a media training session and had a meeting with the NFU President, Minette Batters. We had the opportunity to join in at the ‘Great Wine Debate’, learning about British wine-making, including a Welsh vineyard. The first day provided ample networking opportunities.

The second day of the conference included a politics session where Theresa Villiers MP, Secretary of State for Environment, Food and Rural Affairs was the main speaker along with Minette Batters (NFU), Craig Bennet (Friends of the Earth) and Professor Fiona Smith (Leeds University). Due to the current political climate and position of the conference between the election and leaving the EU at the end of January, there was no big political announcement but the exposure and the opportunity to ask questions was great. Henry Dimbleby outlined his ‘National Food Strategy’ with a food-focused panel including Greggs’ CEO, Roger Whiteside. There was an inspiring science lecture from Professor Alice Stanton who, as a Cardiovascular Pharmacologist, used science and facts to combat health myths, with a particular focus on the benefits of consuming animal products for human health. We also attended some breakout sessions. The first was on defining a healthy farm which had a big focus on soil and its importance not only in agricultural businesses, but human health too, with all key minerals that humans need could be derived from healthy soil. The other breakout session we attended focused on a farm in Ireland aiming to produce carbon neutral lamb and beef by 2025, and how it is on track to succeed with the help of LiDAR (Light Detection and Ranging) technology and management changes.

We attended the Oxford Farming Conference (OFC) Union debate in the evening. The motion debated was ‘This house believes cheap food is worth the price’, and was debated in the presence of HRH Princess Royal. Following the proposer, opposer and seconders’ speeches, the debate was opened to the floor for contributions, and our attendee, Rachael Madeley Davies, made a comment in opposition to the motion and won a bottle of bubbly presented by the Princess for her contribution to the debate. The opposition were successful. We all had access to the post-debate supper at Christ Church College where the prizes were awarded and Rachael had a brief chat with the Princess.

The last day of the conference was another early start with a networking breakfast followed by a session on the relationship between food and faith. The session highlighted that we are part of a multicultural and multifaith society that can be united by food, and how farming has strong links with faith. The Frank Parkinson lecture was delivered by Poran Malani, a communications expert with 30 years’ experience in marketing brands like Coca Cola, Amazon, Vodafone and Lenovo. He talked about how primary producers need to market themselves better, and that in the future, farmers will be really important marketing tools. He had prepared a fantastic video promoting agriculture for the conference, but the OFC is still awaiting copyright sign off. It will be well worth the wait when it becomes available. The third day had a thread focusing on farmer mental health and the importance of seeking support when required.

The conference finished with a Lebanese speaker, Kamal Mouzawak, who talked about the power of food in society to heal and how food can be a uniting factor, even among different religions and cultures, and at times of war. He gave a very different perspective on life and considering the current (and long-standing) situation in Lebanon was a breath of fresh air. 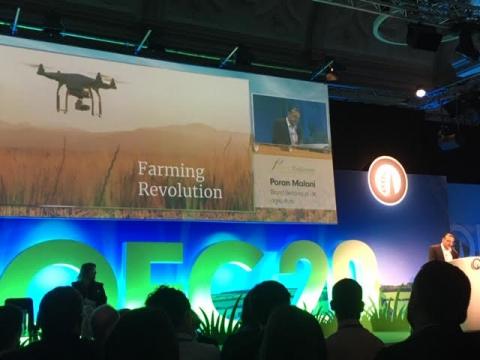 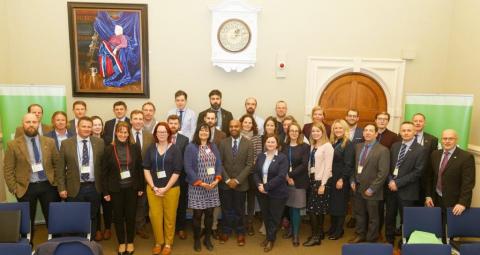 The Emerging Leaders Programme is designed to equip delegates with the skills, confidence and network to carve a leadership role within the agricultural sector. The pre-conference workshop and exposure at the three-day conference has broadened our networks, made us view our farming businesses differently, and made us want to encourage others in rural communities to take opportunities within the industry.