As a consequence of population increase in the coming decades, and the need to meet an expected rise in the future demand for food, agricultural production will need to increase. This will occur either by expansion of the amount of land used for agriculture, or through gains in efficiency using existing resources. 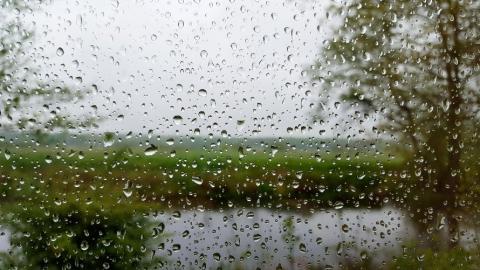 One factor which has the potential to affect future food production and the expansion of output is water availability. Globally, agriculture is the largest consumer of freshwater, using up to 70% of freshwater supplies. Water use in agriculture can be extremely variable subject to geographic region and prevailing agricultural practice. A large proportion of demand is driven by the need for irrigation of horticultural crops in more arid regions. Nevertheless, the demand for water use in agriculture is ubiquitously high and livestock production accounts for 30% of agricultural water usage.

95% of agricultural land is currently rain fed. In the future as rainfall patterns become more unpredictable and shift towards a ‘feast and famine’ regime in terms of rainfall intensity, the potential for declining water availability and potential water scarcity is like to have a negative effect on agricultural (crop or pasture) production. 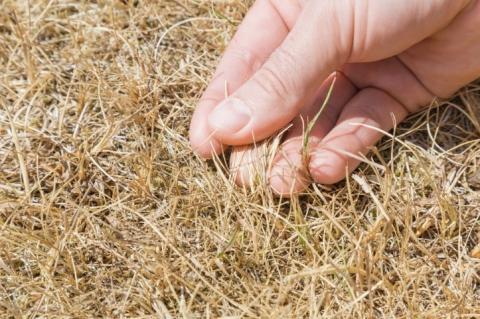 The amount of water that exists on Planet Earth is a stable concept and is not itself reducing. However as a consequence of factors such as climate change and usage of existing reserves, freshwater availabilities may become increasingly unpredictable. In Wales, future forecasts suggest that summers will be hotter and drier and winters warmer and wetter. Model-based predictions from the MET office indicate that precipitation changes in Wales by 2070 will range from between 39% drier to 3% wetter in summer and 3% drier to 22% wetter in winter (for their most conservative scenarios).

Some of these effects are already being observed, with spring 2020 breaking records as one of the sunniest and driest on record. This follows a pattern of now noticeable change over recent years, with weather extremes increasingly commonplace and with events such as the temporary drying-out of local river systems, formerly unheard of, now no longer surprising.

Water foot printing is a technique used to quantify the water demand for a given product, such as a unit of lamb or beef meat, in order to determine relative dependence on freshwater reserves. This approach can also be used as a proxy to determine the relative sustainability potential of farming systems or approaches.

On-farm water is categorised as either blue, green, or grey water depending on its source. Green water is the product of rainfall and blue water is captured from ground or surface water. Grey water is less straight forward as it refers to the water needed in order to dilute pollutants to a concentration level which would be considered acceptable. Most analysis concentrates on green and blue water sources, as these are considered most direct and quantifiable.

For grassland-livestock systems the main drivers of water usage are crop cultivation (for direct forage or silage), drinking water supply for livestock, and water for cleaning. Water will also be used to produce feed rations or concentrate, which are often produced off-farm. This embedded or ‘virtual’ water is consumed at the point of production, so when imported as part of an animal feed, a portion of the product is the water reserves from the country of origin.

Grassland-ruminant systems rely primarily on green water resources (i.e. from 84% to 98% for beef, and 97% to 99% for sheep), which is primarily evapotranspiration of rainfall from crop or grassland. Estimates vary significantly depending on assessment methodology and farming approach for the amount of water needed per cow or sheep, but studies reviewed here suggest these are somewhere in the region of 3 - 221 litres of water per kg of beef, and up to 58 litres of water per kg for lamb/sheep (when calculated using Life Cycle Analysis). The range and variation here reflects the great heterogeneity of beef or sheep production systems across varying geographies. Volumetric water consumption figures are useful to understand the demand or burden of agricultural practice on freshwater resources, however such a figure gives an incomplete picture with regard to the impact of extraction on the local freshwater system. Changes in freshwater availability as a consequence of extraction also need to be quantified in order to understand overall effect.

Water scarcity can result in production output reductions. This has already been observed in certain circumstances for some horticultural crops, but as yet has not been widely reported in grassland-livestock systems. Nevertheless, under increasingly variable rainfall regimes, as a result of climate change, it is highly likely this will be the case. Furthermore, potential disruption to water supplies is a growing challenge for all farming systems in the UK. Even farms which are within traditionally high rainfall areas, such as here in Wales, may suffer from short-term disruption due to increasingly unpredictable rainfall patterns. Technological interventions therefore may become necessary in order to manage any adverse impact of short-term fluctuations in supply.

Water scarcity can be managed on-farm to some degree through the application of technology, or through investment in appropriate infrastructure. In order to reduce reliance on blue water reserves, rainwater collection technologies may prove an important future component of farm design. Rainwater captured from yard or barn roofs over winter could be stored in tanks for deployment during summer months, reducing the pressure on freshwater resources. 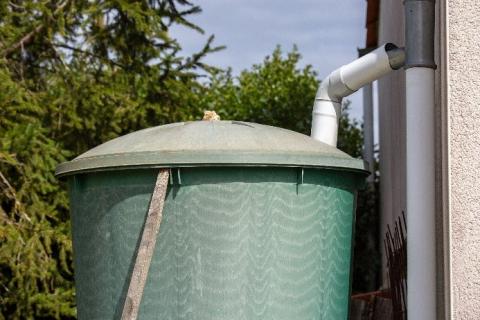 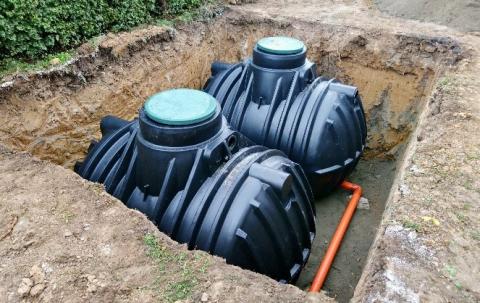 The importance for managing rainwater in order to avoid dirty water contamination and reduce slurry storage burden has been discussed in an earlier technical article. In situations where infrastructure for rainwater harvesting helps to reduce contact with slurry/dirty water then this could be a method for futureproofing farmyards with infrastructure that achieves multiple goals simultaneously. In addition to rainwater harvesting technologies, condensation technologies could be deployed in-field to capture moisture from the air. Condensation irrigation works by using a differential between above and below ground temperatures. Warm moist air is funnelled by fans into a cooler condensing chamber below the ground level. The moisture then condenses and collects in a storage reservoir. This can be used as a direct way to get water into soil for plant uptake.

Recycling and water re-capture technologies may complement the above capture approaches. Much water is currently wasted on farm, through inappropriate use or as part of existing waste streams. Certain waste outputs such as water for cleaning, or wastes such as slurry and manure have a water content which can be recaptured. Organic wastes can be dewatered through mechanical action, and, depending on purpose, can be made as clean as needed through filtration. Even a pure water state can be achieved through the application of precision technologies such as microfiltration. Currently it is likely that this action would prove uneconomic, but in a future context where water is a more potentially valuable component of food products, then such interventions may well be justified.

IoT (internet of things) technology can be used to capture the information needed for advanced or precision agricultural approaches related to water management. For instance, sensors that detect soil moisture can be used to inform irrigation systems when the optimum amount of water has been administered, allowing the system to reduce over-watering and waste. Such data capture approaches may also be applied to inform grazing management, in order to avoid overuse of grass or fields suffering from heat stress.

which fields can be considered productive. This could allow a system of usage intensity to be determined, maximising use within the constraints of water-use potential.

As well as the physical interventions above, a shift in current management philosophy may also prove necessary. For instance, future farm system design will need to focus on allowing concentrate or animal feed production to be undertaken purely through green water provision, rather than through blue water extraction, as feed production which relies on blue water reserves will have an adverse environmental impact. As the impact of water stress becomes more pronounced in the years to come, blue water usage in such circumstances could be considered unsustainable. A shift towards home-grown feeds, rotational field management, or grassland swards which are more diverse and species-rich may also make farm production systems more resilient. In the case of multi-species grassland, the mix of diverse organisms in community, each with individual characteristics (i.e. species with deep-rooting tendency able to access water from deeper layers in the soil), or different strategies for water acquisition, strengthens grassland resilience to environmental perturbation, such as from drought.

Lastly, in times of extreme drought, interventions may become necessary at a national scale in order to ensure sufficient water is available for food production. Desalination, the process of converting saltwater to freshwater, is an approach which uses a range of technologies such as reverse osmosis or microfiltration to remove the salt content from seawater. This offers a huge potential resource in terms of future water availability, as the vast majority of water globally is contained in the oceans. Of the many challenges associated with this approach, the cost of energy consumption is a key issue. However, advances in recent years with regard to technology efficiency now mean that this approach is increasingly considered as a viable option for the production of freshwater.

The import of water in agricultural commodities needs to be considered as part of any water footprint, as this activity may lead to water stress elsewhere in the world (and potentially in developing regions where water stress is already high). This may lead to an ‘offshoring’ attitude towards water conservation, where the environmental or societal impacts of water extraction are obscured by virtue of geography.

Conversely, this concept may present a future opportunity for water-rich nations such as Wales, where rainfall is high, to export water in the form of products (particularly those that are water intensive to produce) to nations with more arid or dry climates. Such trade potential may help to justify the investment needed to modify farms in terms of technology or infrastructure for enhanced freshwater management.

Future challenges associated with the supply of freshwater is a key area for consideration in the design of farming systems that will be able to endure the pressure exerted by climate change. As rainfall patterns becoming increasingly erratic, and annual rainfall may be delivered in shorter, more intense events, then planning may be required to ensure there is sufficient water provision for on-farm activities during drier periods of the year.

Farm adaptation is possible by introducing infrastructure or technology which can capture rainwater or reuse existing water resources. Certain technological approaches can also help to manage resources through increased precision or enhanced observation and predictive insight. This will help to reduce the environmental impact of freshwater extraction, reducing any negative image of farming as an excessive water user. Furthermore, by improving farm system resilience to the issues surrounding freshwater provision, such as by increasing grassland species richness which increases soil carbon sequestration, some of the on-farm effects of climate change will simultaneously be reduced.