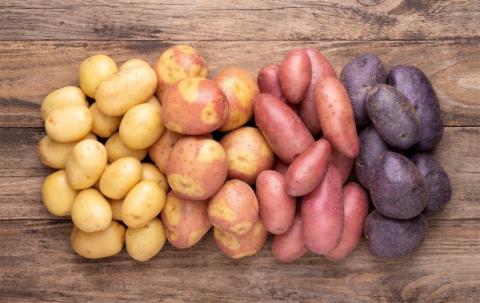 Potatoes as a key crop

Potatoes are a staple crop worldwide with large scale production and over 5000 varieties in total. One of the reasons for the success and utilisation of potatoes as a staple crop is that they produce more food on less land faster than almost any other food crop with good climate adaptability and also containing significantly higher important proteins than grains like wheat. Currently, potatoes stand as the fourth most important staple food crop for supplying global caloric intake behind wheat, rice and corn so optimal production is essential for a growing global population. Whilst recent media articles have noted dangers surrounding cooking potatoes at elevated temperatures, due to the production of carcinogenic acrylamide this is not a unique phenomenon to potatoes alone and cannot offset the positive dietary nutrients provided in the form of antioxidants, vitamins, polyphenols, minerals, carbohydrates, and dietary fibres. 2020 UK production figures for potatoes were estimated at 5.37 Megaton (million tons) despite lower areas planted than previous years, thus higher yields per area are being achieved. Wales (combined with the West midlands) accounts for around 12.5% of the total planted area and total production of potatoes across the UK a significant proportion despite the country’s relatively small size and high focus on livestock over arable.

Globally the FAO has suggested that 40% of yields across all crops are lost due to plant pests and diseases. Environmental changes with warmer temperatures which are set to occur due to the impacts of climate change are only likely to increase the risk of diseases and pests, as such this is a vital issue moving forwards in agriculture. This is particularly true of potato fungal pathogens as they require specific temperatures and humidity to thrive and predictions of climate change in the UK suggest this could cause increased blight issues.  Across potato production estimates of 20% crop losses have been associated with late blight causing more than £3.5 billion losses worldwide. Late blight is considered the most important UK disease to potato production with estimated industry costs of £50 million per blight season. As such prevention and control of this disease is an important consideration in science and the sector as a whole. The disease is caused by the Phytophthora infestans a water mould fungus that can also cause pathogenic diseases in tomato crops (increasing its economic importance), with the main control being fungicide applications. This pathogen causes potato leaf and stem damage and eventual death which in turn causes the subterranean tuber to rot. P. infestans is particularly difficult to control as it undergoes rapid evolution via clonal reproduction and sexual reproduction and as such can develop resistances to treatments very quickly and particularly effective strains can dominate quickly. Many evolving strains of P. infestans are not only resistant to several fungicides and other biocides but they have also shown increased virulence and “aggression” causing increasingly worse damage to plants. 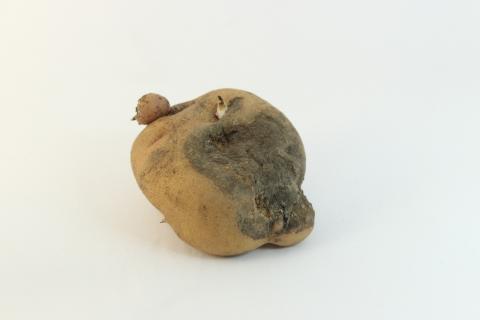 Early blight also called Alternaria is a soil-borne fungal vector with the main two species being Alternaria solani and Alternaria alternata. Alternaria species cause dramatic leaf losses in growing potato crops which in turn can reduce yields up to 30%. Early blight is the second-highest impacting disease on potato production worldwide and similarly to P. infestans it can also be a pathogen that impacts tomatoes as well as aubergines and peppers. As can be seen below the infected leaves become necrotic and dry out and the spores of the fungus remain present on these which can be an issue in infecting the potato itself during harvest. Due to its fungal causative agent, the main control and treatment options revolve around regularly timed utilisation of antifungal chemicals. 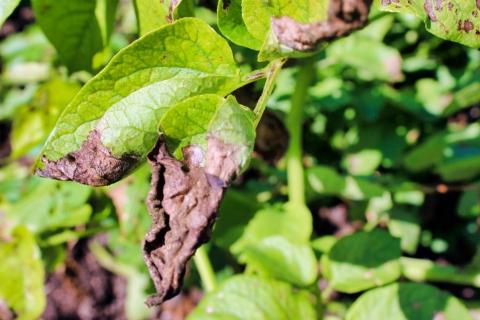 As noted the main controls for potato blights are fungicide applications, however, regular application of fungicides particularly as a preventative measure in advance of any disease symptoms is a factor that can cause selection pressure. This pressure impacts the development of resistances to certain fungicide modes of action. Fungicide chemicals in excess are also a potential hazard to plant, animal and human health and can pollute the environment through their presence in soils and watercourses impacting ecosystem functions. Furthermore, previous estimations have noted that 10 – 17% of GHG emissions in potato production comes from a combination of energy and emission output associated with the production of fertilisers and protective chemical pesticides. With the second biggest GHG output coming from farm operations (applying pesticides and fungicides would factor into this too). The problem with reducing fungicide use currently, however, is that the climate impact of their production is far lower than the climate gains from producing higher yields of crops per area achieved by controlling disease which can drive high application rates. As such legislations are already in place which put thresholds on acceptable levels of these chemicals being applied to and present in both soils and food products themselves. Whilst these limitations on applications could be seen as a detrimental impact on the control of fungal pathogens, reducing potential achievable yields, it should also act as a key incentive towards finding more sustainable methods of production management.

Biological controls are one of the more sustainable and environmentally considerate alternatives to synthetic chemicals. Several natural compounds have undergone investigation for their potential roles in controlling P. infestans and Alternaria sp.. Chitin, an abundant organic compound, can be extracted from fungi, crustaceans and insects and has been assessed for its antifungal impact on P. infestans showing inhibitory effects and synergistic activities with synthetic fungicides (potentially possible to reduce quantities of more dangerous chemicals needed). Whilst essential oils from early-blooming lilacs are effective at controlling Alternata species in field trials. As well as natural compounds beneficial microorganisms such as bacteria Bacillus subtilis and competing fungi species such as Chaetomium globosum have been found to increase plant health and yields compared to controls with late blight and early blight. To assess the potential of biological controls through naturally derived compounds a previous Farming Connect European Innovation Partnership (EIP) Project was performed. The project involved two farms using saponin (Hederin) extracted from common Ivy plants as a natural fungicide for blight control in potatoes. Whilst on its own this option proved less effective than the synthetic chemical alternatives, long-term it was found to work well in combination with a biostimulant for plant growth reducing blight incidences over that of synthetic fungicides alone, facilitating new options of environmental and organic controls. Not only could this improve potato crop production but this and similar natural biopesticides could create new markets for plant species that could utilise non-agriculturally important land more efficiently, and play roles in carbon sequestration if managed well. Whilst ideal systems of biocontrol could have multiple benefits and improve environmental impacts research and evaluation of impact must be performed as it is known that non-target impacts of biocontrol strategies can sometimes be detrimental and their impacts on ecosystems can be difficult to predict.

Where both biological and synthetic compounds are concerned applying these in a more precise and accurate manner could well benefit both environmental pollution impacts as well as yields whilst saving money by reducing overall chemicals required. Technologies that allow more accurate mapping of crops and soils have been discussed previously and these can facilitate the creation of variable rate application maps across fields and farms. Studies of UK application of fungicides in winter wheat for example have shown that variable rate application could reduce chemicals applied by up to 25% saving £900+ on a 10 ha piece of land. Furthermore, the targeted timing of these applications can be of benefit to both categories of compounds by reducing disease impacts and saving costs and can be facilitated by accurate weather monitoring and climate factoring models and algorithms. Tools such as TOMCAST exist which use weather patterns and key temperature and humidity values at crop levels to predict and forecast likely early blight disease outbreaks. Other models are also constantly in development to refine application schedules for late blight.

Other potential control options for potato blight include gene editing and selective breeding of commercial production species of potatoes. Whilst controversy around GMOs is still an issue, in the UK discussion on legalising their use and development may lead to more freedoms. Genes with involvement in resistance to late and early blight infection have been highlighted in multiple studies and genetic modification of cultivars to include multiple resistance genes, many of which have been identified in wild potato species or close relative species, have shown beneficial protective effects. Other studies have noted the role of UV blocking meshes and covers for their roles in the control of potato pests inclusive of A. solani and the invasive insect pest tomato potato psyllid (which have recently become present in Australia and New Zealand). Not only do these covers act as a barrier to UV radiation which has been shown to retard potato blight development, they also act as a physical barrier which could reduce spore interactions with plants. 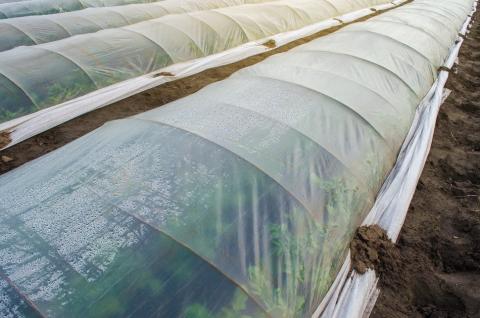 Careful control of nutrient application may also be important where potato blight is concerned as multiple studies have indicated that infections occur with increased severity when higher nitrogen (N) fertiliser levels were applied. This suggests a balance needs to be struck between yield boosting, disease control and fungicide/alternative treatment applications (if higher yields are aimed for with N application, then increased disease control considerations will subsequently be required). Whilst a study looking at multiple impact factors on late blight suggested that controls relating to irrigation levels, row-to-row and plant-to-plant spacing as well as N, P (phosphorous) and K (potassium) fertiliser levels were all implicated in the severity and spread of the disease. Where again lower N levels but higher P and K levels were found most beneficial.

Potatoes are one of the most vital crops for feeding the global population, as such improving yields and reducing losses can improve food availability worldwide. Within potato crop production the biggest threat to productivity are the diseases of late and early blight which are both caused by fungal pathogens. Control currently is largely reliant on synthetic fungicidal applications which can have detrimental impacts on ecosystems, health and environmental pollution as well as impacting economic gains due to high costs of purchase. With agriculture practices and legislations moving towards a more sustainable and environmentally friendly future alternatives to such practices are key. Various biocontrols exist as well as genetic and physical management options which could reduce blight related losses. Whilst these options seem highly beneficial further research must be performed to understand the true impacts of these alternative options long term to ensure we aren’t simply creating issues somewhere else in the ecosystem.