Agricultural and rural crimes are an area of growing concern in the UK. Results from the national crime network in 2018 suggested 69% of farmers and rural-specific business owners had been a victim of crime within the last year. Current NFU figures put the cost of rural crime at £54.3 million demonstrating a ~27% increase in cost impacts since 2016. Regionally the midlands saw the highest cost impact of crimes, however, for its relative agricultural gross output, Wales saw a significant yearly increase of 11.1% from 2018.

Within agricultural crime, thefts of machinery, livestock and, more common recently, beehives are the biggest factors that impact productivity and financial stability. However, livestock injury, particularly via dog attacks, has also been on the rise.

Traditionally, security has been an area that has been known to be lax, with it being common for farm-houses and outbuildings to be unlocked and tools and machinery to be left in the open often with keys in ignitions. These attitudes may well be linked to why farms are such an attractive target to criminals. Recent papers have discussed the need for farmers to utilise the concept of a farm as a defensible space in the ‘Fortress Farm’ concept whereby integral five-step plans are laid out and step 4 will be the focus of this article;

Simple traditional security options and considerations should not be overlooked. Where possible having direct lines of sight to high-value areas even if this means potentially demolishing older unused outbuildings or landscaping/hedge-cutting in a way to maximise visibility can be key. Along with direct lines of sight, ample motion-based security lighting can be a key deterrent as well as quality maintained locks and indoor locked areas to store machinery each night.

To compound issues, farmers are also observed to feel like ‘second-class citizens’ where engagement with local police forces are concerned. Due to rural areas having far more spread police resources than urban areas, response times can be lower and this can impact actions taken. Often these issues are noted to cause farmers to engage less with crime prevention and reporting. Alongside the economic and social impacts associated with agricultural crimes, it has also been suggested that crimes can act as a significant stressor on farmers in an industry where several stressors and mental health impacting factors are already known. The first study which factored in crime as a stressor on UK farmers was performed in 2020 and highlighted the significant impact on farmers in feeling anxious, paranoid, isolated and depressed. This further demonstrates the need for improved systems and considerations with regards to security.

One area that shows promise with regards to security is the ability to monitor environments 24/7 using sensors that can communicate. The ‘Internet of Things’ (IoT) is the concept of technologies having sensors whereby they send and receive data between devices and the internet. Considering how to implement IoT for security and anti-theft purposes has become increasingly common over the last 20 years. Across multiple sectors including industrial, residential and agricultural, strategies are being developed to integrate this 24/7 monitoring and communication potential that IoT devices provide. This is highlighted by searching published literature using key terms “theft”, “IoT”, “anti-theft” and “theft prevention” which recovered 239 pieces of research, 86% of which occurred in the last 5 years. 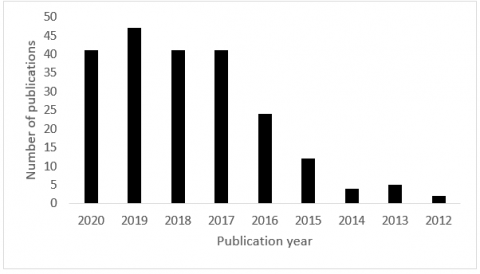 Farming Connect along with Welsh police forces and local farms are seeking to determine the effectiveness and other considerations of using IoT and other connected resources on farms. In a current European Innovation Partnership (EIP) project the low power wide area network (LPWAN) LoRaWAN is being trialled for communication between devices on vehicles and access gates in an attempt to monitor and prevent crime on farms. LPWANs offer a range of communication in the kilometres, depending on the topography of landscapes surrounding gateways, as such these can bypass potential issues of WIFI/Bluetooth distances and signal issues with rural broadband and mobile network access. Connectivity/communication is also important in reporting any crimes or alerting emergency services in the case of accidents as discussed in a previous article and LPWAN could offer alternatives in areas of low or no signal. 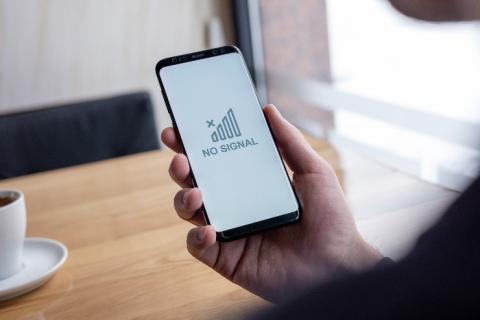 Several systems for theft/intruder detection involve laser sensors, where an invisible beam is passed across an area, if this beam is broken then it can activate an alarm or alert. However, such systems tend to be quite expensive difficult to move once installed and not feasible to implement in all locations. Other systems have looked at using gyroscopes/accelerometers to detect movement. Any physical change (opening or breaking a gate or door) can be detected and sound alarms and alert farmers via apps. These can be lower cost and simple to install or move to new locations. CCTV or other image-based systems can have multiple uses not only for security but also to assist with farm safety and specific livestock health issues as previously discussed. Ultimately systems could be integrated where motion detectors (see table below) detect movement to actively switch on CCTV to save power and storage space needed.

In a simple system, CCTV would be connected and alerts would allow farmers to view live footage to make decisions on the incidence. By integrating image processing into a system false alarms can be avoided and determination of whether the image is of an animal or human could be performed. If a predator animal is recognised alert noises of various frequencies could be played to scare them away protecting livestock. If the intruder is human, a further recognition system (facial ID etc) could be used to determine if it’s an authorised person or not and send SMS alerts and alarm sounds accordingly. Similar integrated systems are already available through for example ‘Smarter Technologies’ which say their systems integrate motion detectors and pressure pads on gates and in farm grounds alongside CCTV and GPS tags on key valuable machinery to provide rapid security updates and alerts. 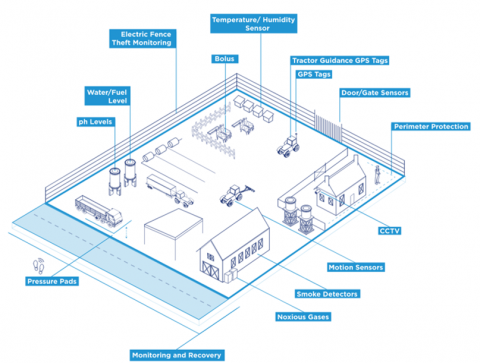 Of the NFU 2019 rural crime figures, vehicle theft (inclusive of tractors, ATV/Quads and land rover defenders) accounted for over a quarter of the costs, suggesting this is a key area for considerations of security. IoT security technology options other than GPS tagging (which relies on the thief not knowing to remove these units) include engine immobilisers linked to facial recognition (which in some extreme instances have also been suggested to provide an electric shock to potential thieves). This technology carries on from multiple facial recognition in-car systems which are being developed to detect drunk and tired drivers. Systems have also been linked to onboard GPS tracking where vehicles moving outside of a set geographic area can automatically be immobilised and tracked. Other IoT security options can simply include a loss of device connection. If a vehicle is fitted with a system that is constantly connected to a ‘home hub’ then moving the vehicle out of range will break the connection and could generate an automatic alert. Mobile phone-based home automation already makes use of such systems to turn on all the lights in your house once your phone connects to your home WIFI or turn all electronics off when you disconnect from home WIFI via apps such as IFTTT.

For livestock theft tracking, a key consideration is the availability of a device that is cheap, multifunctional (providing other precision benefits such as monitoring animal health) and robust. For these reasons many GPS collar or ear tag type systems may not be viable as they can simply be removed by the perpetrator. The inclusion of circuits within these tags which can detect removal or tampering and produce an alert could help in notifying of crimes as quickly as possible. Other options include internal devices such as boluses which cannot be simply removed and would often not be known to be in place by the individuals committing the crime. Whilst information on the feasibility of GPS tracking and accuracy within an animal's internal environments appears to not have been studied, current bolus systems do communicate with a central hub to offload data about animal temperature and rumination. As such, a strategy surrounding the loss of device connection could provide alarms relating to potential threats. To date, however, many boluses or GPS collar/tag-based systems may not be commercially feasible to be employed across entire herds unless they are high-value breeds or profitable intensive farms. Despite this, many systems are often marketed for specific security purposes. Another option is similar to SmartWater (where you mark personal belongings with a forensically traceable liquid) and has been marketed by a company called TecTracer. Their system involves marking livestock with coded microdots that remain on fleeces and coats and allow stolen animals to be traced and recovered. Whilst this can be effective if animals are stolen to take to other farms or are recovered quickly, much livestock theft is for black market food processing, as such once the skin and fleece/coat is removed this traceability is lost.

As technologies advance so do the crimes perpetrated, with cybersecurity being a massive facet of consideration in the modern age. Having farm precision systems and security systems reliant on the communication of data and connectivity opens up a new risk of hacking and tampering with such systems. As such a significant amount of consideration needs to be put into aspects such as the authenticity of users accessing systems or data, the confidentiality of the data collected and privacy and security of the systems and data from external attacks. Whilst data encryption and filtering can be options for safety, where wireless communication is concerned there is always a risk of blocking signals being a route of attack to prevent or modify security alerts. As systems continue to be developed there will likely be a constant arms race between the technology providers and the criminals seeking to circumvent these. Furthermore, many reports suggest that several of these precision technology aspects of agriculture, such as on tractor RTK GPS systems, due to their high individual value are now becoming themselves the target of theft. This demonstrates a growing and evolving state of affairs with regard to rural crimes. 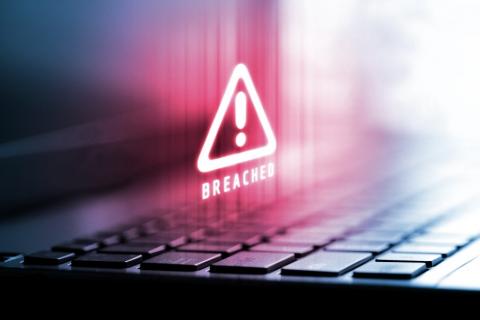 Agricultural crimes are on a rising trajectory in the UK. More needs to be done to keep farm environments safe and secure. Simple and practical options can include maintaining quality locks, gates and have locked storage for machinery. However, as agriculture moves towards increasing integration of technologies there appears to be a clear role for these to play in advancing security. Sensors and connected devices are already being employed on farms to monitor the local environmental conditions and animal conditions 24/7, so why not utilise these to monitor security 24/7. In the future integrated connected technologies aimed at security could help farmers feel safe in their place of work/home whilst helping to reduce their insurance premiums and abating criminal costs.