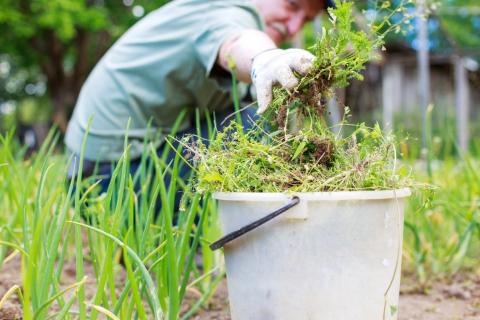 Weeds pose one of the biggest impacts of all ‘pests’ in crop farming and can have a significant impact on reducing grazing quality in livestock farming. Growing, reproducing and spreading quickly, weeds can invade and overtake several niches and tend to have high abilities to adapt to changing environmental conditions (particularly compared to agricultural species with which they are competing). Interacting weeds as such can physically outcompete crops and pasture species for space or indirectly impact growth via strong competition for available soil nutritive resources and other resources (light, water etc). Research in crop production has noted that weeds caused more than double the losses associated with animal pests and pathogens with potential losses up to 34% globally. Using 34% losses in a UK perspective, based on 2020 crop output figures, it is likely that around £4000 million of potential profit has been lost to weeds. With current strategies for weeding in non-organic systems largely relying on herbicide sprays, increased economic impacts are also associated with the use and production of these chemicals as well as several environmental negative impacts. Herbicides can also drift and leave residues in food with potential health risks (causing chronic diseases and death to 1 million people a year) and are noted for endangering and killing wildlife. Herbicide use in the UK rose almost 2-fold between 1990 and 2015 with 25.5 million hectares sprayed in 2015. Heavy use globally has caused intraspecific selection in weeds towards high levels of resistances, currently, there are 263 species of weed with known resistances and 164 different herbicides having specific resistances documented in one or more weed species. Furthermore, the changing climate may well have increased selection pressure in weeds for developing herbicide resistances and where resistances occur these could double the economic burden of weeds. As such alternative controls to chemicals are vital towards a sustainable and environmentally considerate future.

Rumex species including broad-leaved docks and curled docks are widely considered to be among the most disruptive weed species worldwide having impacts on arable crops and in temperate grasslands particularly. The issue with dock incorporation into livestock pastures are their lower nutritive value than grass mixes. If left unchecked docks can reduce grass yields in a field by up to 40% impacting livestock stocking efficiencies and having downstream impacts on any silage cuts taken. Furthermore, it is known that docks have high levels of oxalates and oxalic acid which in large doses can be detrimental to animal health. Normally, these weeds are controlled using selective herbicides such as MCPA (2-methyl-4-chlorophenoxyacetic acid) or other herbicides that concurrently impact clover species but as environmental sustainability becomes more of a focus and organic farming prospers and becomes more profitable chemicals are less attractive. Whilst there is little information on the scope of economic burdens which docks cause research suggests a 1% decline in dry matter (DM) yield for each per cent of ground cover of the weed and surveys in the Netherlands found that, when not controlled by herbicides, 1 in every 2 fields assessed had over 1,000 docks per hectare. Furthermore, 85% of organic German farmers stated broad-leaved docks to be an issue, thus it is likely docks have significant economic impacts. Furthermore, personal communications have stated that many farmers specifically refrained from switching to organic farming due to fear of lack of broad-leaved dock controls without chemical use, further indicating its high impact. Current controls outside of chemicals for docks include; 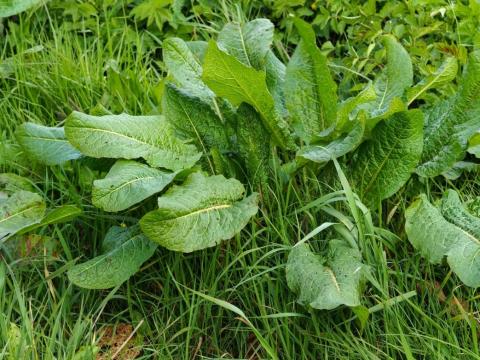 Whilst using electric current to control weeds may seem like a new and novel approach it has been considered since the late 1800s, but previously had too many issues regarding safety and scalability/ease of use due to higher-voltage requirements. The two methods of electrophysical control are (1) continuous electric shock via direct contact with the plant material or (2) non-direct spark discharge (where pulses of electricity are delivered through electrodes on either side of the plant). Electricity courses through the plant material warming the tissues which is assumed to damage internal structures, vaporise internal water and lead to plant death (denaturing key proteins and enzymes). Benefits of electrical weeding other than lack of chemical contamination include the targeting achieved, as there are no-off target effects that impact surrounding plants or the environment. A Farming Connect EIP project is looking into the feasibility of this technology on dock control in grasslands through the commercially available RootWave Pro system. Electrophysical technologies are also being incorporated into more automated precision control strategies, applying electrophysical weeding to automated robots could free up costs, labour and reduce any remaining operator risk when managing grasslands or crop fields. Rootwave itself is already in collaboration with the small robot company (based in south England) towards these aims. Research continues to optimise electrical weed control with systems looking to utilise lower currents with lower energy demands for increased safety and improved sustainability. One study found success with far lower currents than current commercial systems and noted future strategies should focus on early plant growth stages. They also hypothesised, in scaling up, that 10 electrodes on a boom arm could kill ~7,200 weeds in an hour for the same energy as 1.5 hours of a 60-Watt lightbulb, suggesting low energetic demands for sustainable weed control. 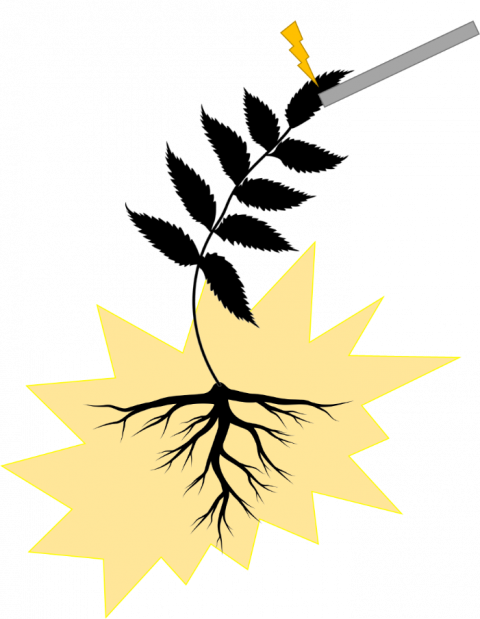 Integrated weed management (IWM) is a more holistic approach to weed control with aims to reduce reliance on chemicals via non-chemical alternatives. In the UK these non-chemical alternatives have increasingly been utilised in the last 15 years though often in isolation rather than in a defined integrated manner. Inclusive in IWM are genetic, physical, biological and cultural control options.

Cultural control of weeds can occur via changing rotations and cover crops, deep ploughing, manual removal of weeds and chemical mulching, however, deep ploughing (and any type of physical disturbance of soil) and chemical mulching, whilst potentially effective, are not great sustainable environmentally friendly options. A more sustainable cultural option that has been demonstrated to have resilience to weed invasion along with several other potential benefits is the incorporation of species-rich grasslands. 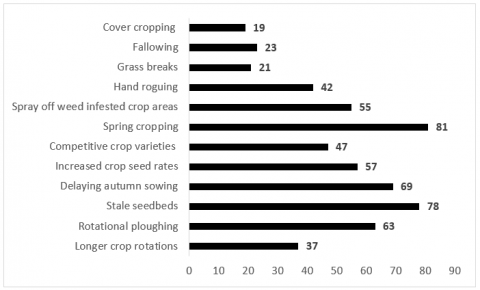 Whilst previous articles have discussed biological control of pests, certain insect species preferably graze weeds rather than grasses or crops and as such can be beneficial. Alternatively, fungi that have specificity for weed species could also play roles in weed control either alone or in combination with insects. Developing sustainable ecosystems that don’t just require repeated insect/fungi purchase and release, however, can be very complex to achieve. Bioherbicides are derived from natural chemicals produced by plants to hinder or prevent the growth of other plants in the surrounding area, and is well documented in sorghum crop rotations. Whilst incorporating plants that impact weed species into crop rotations or grassland mixes could be an option, generally, their low desirability and yields make it more feasible to attempt to extract the chemical elements in bulk.

Physical options include mainly mechanical and thermal effects on plants, with mechanical options always disturbing the surrounding soil compared to many thermal choices. Thermal options include; hot-water treatment using hot high-pressure water >80°C, Spot-flaming on handheld or tractor devices and electromagnetic radiation (infrared, UV, microwave, lasers). Each of these options has different abilities including; level of selectivity (off-target impacts), efficiency, cost and energy usage. Direct mechanical removal of weeds can be achieved via hand (high labour required), machinery (often impacts soil and can be non-selective in targeting other plants), automation (see precision integration below) or via strategic mixed grazing strategies. Goat grazing for example has been demonstrated in one study to increase plant mortality up to 87% for dock species by the fourth year of grazing. Other research notes roles for different grazing animals to control different weed aspects, such as cattle to consume seedheads and application of goats during key periods seasonally.

Currently, public concern exists surrounding the transfer of genes to non-target species due to previous modification strategies. As such any future strategies will likely require far more robust parameters and testing to be in place before they are generally accepted.

Precision technologies can integrate into both chemical and non-chemical weed control in a variety of ways. A huge level of research has been undertaken with regards to the visual identification and analysis of weed species selectively from within crops or grasses for the application of selective weeding. Most systems are attempting to use some form of artificial intelligence algorithms to correctly and repeatedly identify weeds with varying success’ relating to species (some species have easier to recognise features than others) and environmental conditions (sun, cloud and rain all impact images for analysis). Systems for the collection of these images include remote sensing platforms such as satellites, unmanned aerial vehicles (UAVs) and ground-level vehicles or robots. This data can be used to produce specific weed maps for improved targeting and treatment on farms.

Automation through robotics is another area where precision integration could assist weed control. Robots can operate 24/7 without input and have already been established for weed control in several situations. Systems employed on robots for weeding include targeted chemical sprays, electrophysical probes, spot-flamers, microwave emitters and mechanical cutting/tillage tools. Currently, technologies have been far more developed for row cropping systems where they can follow pre-determined paths and only need to differentiate between one crop species, whilst anything else is defined as a weed. Such systems are being trialled as part of another EIP project by Farming Connect for cost effectiveness in small scale horticulture. AI learning datasets increase the ability to review and identify weed species present and work with more complex multi-crop systems will increase. Where robotics and grasslands are concerned one of the major issues cited in the UK is the percentage of grasslands found in less-favoured areas which often include difficult to traverse terrain (rocky, hilly and steep), this makes the design of autonomous robots far less practical. In such situations UAVs could be one answer, though UAV weed control options available are chemical spraying which, whilst more targeted than traditional blanket spraying, is against current UK regulations. Robotic systems if optimised should integrate well with organic and sustainable farming strategies due to the high focus on non-chemical weeding applications. In comparative crop-based robotic weeding research, it has been highlighted that robotic weeding, even if the robots in question are fossil-fuelled, were more sustainable than non-robotic machinery-based systems in sugar beet production. Also, robots tend to be designed to be far more lightweight than traditional machinery requiring less energy to traverse the landscape and causing fewer soil compaction issues. 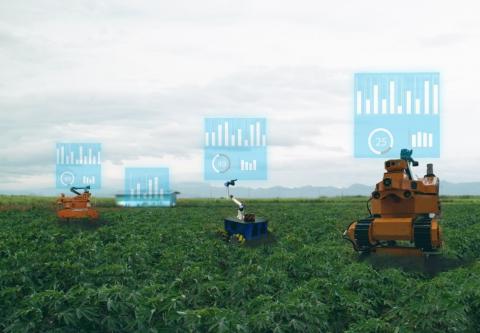 Chemical control of weed pests is not sustainable long term due to resistance and detrimental environmental impacts. Non-chemical strategies exist and are often practised by farmers in isolation or combination with chemicals control. Encouraging an integrated holistic management approach to weeds via IWM could not only improve weed control but also reduce costs, labour and decrease a farms carbon footprint. Amongst non-chemical options, electrophysical control may be a highly beneficial weed control tool in certain circumstances. However, it is far more likely that strategies will need to be considered in a site-specific manner utilising a selection of tools and strategies in unison.