Nitrogen and agriculture – where do we stand?

Nitrogen (N) is an ever-present requirement and topic of discussion within agriculture. The availability of synthetic N, due to industrial production, shifted the feasibility and scale of agriculture worldwide, and arguably enabled the dramatic boost in the global population following WWII. Nitrogen is essential for plant production, as it is required to make both amino acids (for proteins) and nucleic acids (for DNA), and is used in the correct development and functioning of chlorophyll, thus being vital for photosynthesis. All this means that if N is lacking, plants will grow more slowly, have lower product yields, and be more susceptible to attack, disease and death. Because of this, in most systems, we amend our agricultural soils to ensure plants can survive and thrive. However, despite innovation surrounding the use of synthetic N fertilisers, we are becoming increasingly more aware of the problems of their inaccurate and excessive usage in the face of their benefits for commercial growth and yield. 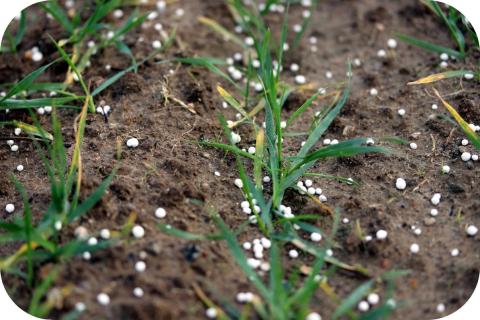 When we talk about the costs of N, we don’t just mean sales of the fertiliser themselves (though this is a big factor for farmers); we also mean the broader implications, such as the environmental and social ‘costs’.

In the UK, the costs for all major sources of N (including ammonium nitrate [AN], granular urea and liquid nitrogen [UAN]) have increased on average by around £486 per tonne over the last four years or more, equating to an average 213% inflation. This huge increase has put massive strains on farmers' businesses towards balancing production and input costs. Worldwide figures have shown similarly increasing trends over the same periods (though figures here are inclusive of non-nitrogen-based fertilisers), with inflation of around 185%. On balance, the relative changes in the sales prices of the major grain crops – wheat and maize – have only seen an average 127% increase in value, whilst crops like rice have seen five-year reductions in value. This suggests a significant imbalance between input costs to ensure yields and the output value of the food produced. Furthermore, as the production of N fertiliser is reliant on, and closely related to, fossil fuel processing, recent events (such as the conflict with Russia and Ukraine) have added to the uncertainty and inflated the costs of N.

As noted, there are also significant costs to the environment due to the use of synthetic N amendments, with these fertilisers accounting for more than 10% of all the direct agricultural emissions worldwide (or around 2.5% of the total global emissions). Figures suggest that just over a third of the greenhouse gas (GHG) emissions associated with N fertiliser come from their production and transport, whilst the remaining two-thirds come from their application on agricultural lands. These combined equated to 1,244.9 million tonnes of CO2 equivalent emissions in 2018 – the same as the average emissions of around 76 million cars (using a conservative average mileage calculation of 7,800 miles per car per year). 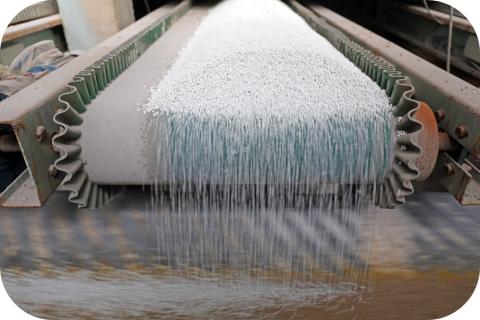 These emissions come from direct and indirect sources, including: 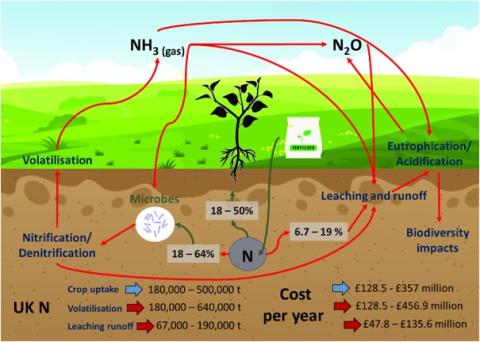 Based on literature estimated crop uptake figures, volatilisation figures and leaching runoff figures - using a conservative estimate of 1 million tonnes of N being applied per year in the UK and averages of AHDB N fertiliser costs for June 2022

Alongside emission-related impacts, there are other unfavourable ecosystem impacts associated with synthetic N intensive practices. For example, synthetic N uses have interrupted normal ecosystem biological N fixation pathways, making these less efficient. Equally, pollutant N, in the forms of mostly N oxides (NOx), acidifies soils and water sources from runoff and causes eutrophication of water sources, all of which have detrimental impacts on biodiversity. Harmful particulates in the air associated with the volatilisation of N have also been linked with increased health risks for both humans and animals, and contribute to toxic fogs.

The efficiency of N use

With current methods of cultivation, we require masses of N to feed the 7.8 billion-strong human population (as well as extra crops for livestock production). Whilst, unlike other nutrients, there is no lack of supply of N (as it is the most abundant element in our atmosphere); the problems with N instead lie largely with the efficiency of its use. Excessive applications of N, above crop requirements, result in significant environmental leakages, and mean that in many instances, farmers are ‘throwing money down the drain’ – or in reality, into the air/rivers. Previous global average estimations have suggested that only around 40 – 50% of N being applied to crops is taken up efficiently. This equates to UK losses of a minimum of 411,000–500,000 metric tonnes of N fertilisers (or £293-£357 million a year), due to plants not taking up N (based on UK total agricultural nitrogen figures from 2019). What’s worse still is that more recent analyses of N efficiency have suggested this range is likely far broader, with only between 18–49% of N being used efficiently, suggesting many systems are operating well below previously suggested averages.

Considering that slightly under two-thirds of all emissions from synthetic N come from agricultural land use, for each 10% increase in crop uptake efficiency that could be achieved worldwide, we could see potential decreases of 2.2% of agriculture’s total global GHG emissions.[1] This means that if we had the optimum situation where crops had 100% nitrogen use efficiency, agriculture would become emission-neutral (or close to it), despite livestock methane emissions, largely because N2O is a much more powerful GHG. Furthermore, if each 10% increase in use efficiency could be directly related to a 10% reduction in N fertiliser industrial production, this would further reduce the overall impact of agriculture’s global GHG emissions by another 0.7% each time.[2] Flipping this situation around, it should be possible to achieve similar results by more selectively targeting N where it is needed, to reduce excess waste being available for pollution and indirect GHG production, whilst also saving costs of purchasing N in the first place. But there are also other improvement strategies to consider.

In previous articles, the KE hub has highlighted many strategies that can mitigate the impacts of, reduce the need for, or increase the efficiency of, N. However, these have often been discussed in isolation. Here, we will bring together the options and improvements under consideration as a whole, and the articles with more in-depth information will be linked for your further consideration.

Other ways exist of shifting the concentration of N in our soils which do not require synthetic N application. Legumes can actively fix the abundantly available atmospheric N; as such they require little-to-no N fertilisation and improve N levels in the soils around them. Incorporating legumes into land management practices via periodic cover cropping, intercropping, species-rich grasslands and other strategies have all shown varying benefits, though most effective impacts are demonstrated on longer-term permanent incorporation. Mycorrhizal fungi also play a role in improving plants' abilities to scavenge more N from the soil, and lead to better crop yields when low or no fertiliser is added to systems. Mixed systems where crops and livestock interact allow more natural recycling of N from livestock back into soils (either via crops and livestock at the same time, or periodic grazing at set times), and have the added benefit of encouraging increased presence of dung beetles (important players in the N cycle and biodiversity as a whole). Riparian buffers have a strong role in reducing the downstream detrimental impacts of N further into the environment, by effectively acting as a barrier to any excess waste N moving into watercourses.

We can consider adding more sustainable N sources to our systems – some of which are better developed than others. Manure/slurry addition to fields is common, and a traditional method of adding nutrients back into soils; whilst it doesn’t require industrial production, like synthetic N, it does have emission considerations surrounding its storage and the linked livestock production emissions.

Unlike synthetic N, the composition of nutrients in manure/slurry is more variable, and unless it is accurately tested, it is difficult to know how well its use will supply crop/pasture needs, and how much will be wasted. The time of year and method of application can also have a big impact on how well the N is used. Thinking more circularly, systems could consider recycling their nutrients in other ways – such as composting or anaerobic digestion (AD) of waste materials. These methods can often produce products with more stable and analysable nutrient levels than, say, direct manure use, and add value to products that might otherwise be wasted. AD particularly can also provide co-benefits of producing other forms of energy for use or sale. Development is ongoing towards making N fertilisers themselves better, and improving the overall efficiency of their use. There are already commercially available slow-releasing N fertilisers that claim to improve plant uptake. However, there are also strategies under study that include the smart coating of N fertilisers to target their release to plants only when they need it (reducing waste/improving efficiency) – many of which are using nanotechnology to investigate this.

Improve the efficiency of N use

The final approach to improve the situation of N is improving the efficiency of its uptake and application. Regular soil testing is important to know what plants need, and should not be underestimated when considering annual pasture and crop considerations. Technologies are readily available that allow soils to be more accurately mapped for nutrient levels, and equally increase the ease with which nutrients can be applied at correct levels. Variable rate application technologies and other site-specific nutrient management technologies are key amongst these, and have demonstrated some of the best performances in maintaining or improving yields, whilst reducing N fertiliser application (typically by 30-40%) across all technologies considered.

As an alternative, considering the route of improving the plant, rather than the fertiliser, is an option. Targeted breeding has been ongoing for years towards improving yields of crops, with modern crop species often having been bred to require huge amounts of N input, but giving large outputs in return. However, breeding can also focus on plant nitrogen use efficiency towards reducing the need for N. This could be accelerated by the use of gene editing as we learn more about the specific genes in plants which regulate how they use N – alternatively, in the case of legumes, looking at boosting the amount of N they fix from the atmosphere, or giving nitrogen-fixing abilities to species (like cereals) which were previously unable to do this.

N is, and always will be, one of the single most important considerations within agricultural crop and pasture systems as it is so vital to plant functionality. We have seen massive shifts in the way that N has been used in agriculture, but the current focus on environmental considerations means that we need to look at this more carefully than ever before. N use in agriculture is relatively inefficient overall, but this does give a lot of scope towards making changes that can improve the efficiency of use massively. Not only should this help farmers shift the balance of their inputs and outputs to their benefit, reducing costs and improving profits, but it should also lead to overall reductions in agriculture’s carbon footprint and role in environmental pollution.

Each 10% is equivalent to

468.0824 Megatonnes of CO2 eq produced by production and transport of N currently (source)