Issues with crop and pasture successes surrounding changeable and extreme environments, yearly variable costs, environmental considerations, increased weed and pest prevalence in combination with restrictions on chemical pest controls mean that increasingly growers must consider new avenues. Alternative options to long-lived traditional crop and pasture options are often discussed as a route to gain access to not only different revenue streams but also subsequent benefits. Several crops are already being considered in the UK with different levels of current markets available, UK specific production understanding as well as different environmental benefits due to lower nitrogen requirements or biodiversity increases for example. Whilst this article is by no means an exhaustive list of all available alternatives to more traditional monoculture pastures grasses and staple crop productions surrounding wheat, barley and oilseed rape, it does hope to advise that several alternatives exist and encourage wider considerations moving forwards.

Crop diversification is noted as being one of the most cost-effective ways of removing or reducing uncertainties in a growers income. In considering new crop diversification options growers should contemplate multiples aspects of the crop in question including the market potential, ease of growth and environmental impact considerations. A good example of this can be seen in the increasing uptake of soya (Soybean) production within the UK, largely due to the breeding of varieties for cooler UK climates. Soya is a high protein food product for human consumption with roles in many products including soy sauce, whilst within the agricultural sector, it accounts for a huge percentage of all animal feeds. Currently, much of the soya industry is based in South American countries and can be associated with environmentally damaging processes such as deforestation (current import levels of soya for the UK alone requires an equivalent land area to 60% of Wales), high levels of irrigation and fuel utilised for worldwide transportation for exports. As such diversifying to soya crops within the UK could help to reduce import requirements (currently around 4 million tons) and lower environmental footprints of agriculture on the whole. Additionally, Soya can be a low-cost crop due to its leguminous nature thus fixing nitrogen and requiring fewer fertiliser inputs, with estimated UK gross margins of £468/ha (comparative gross margins for staple crops below) alongside potential roles in combating blackgrass weed impacts and generally having fewer common pest impacts in the UK. 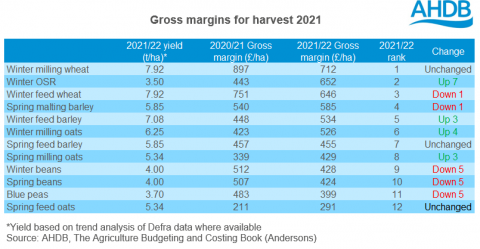 In the UK, cucurbit popularity and demand is increasing. Field grown courgettes are a high-value cucurbit achieving around £8,000/ha with UK production estimated to be between £6 -7 million. An essential consideration where cucurbit growth and sustainability is involved is the desire for insect-mediated pollination, to avoid the labour and costs incurred by hand pollination. Insect pollinators have an estimated value of £3398 per hectare specifically where courgette growth is concerned and have such an impact on the produced fruit size and weight that high pollinator numbers should be encouraged. Cucurbits themselves also function as a good source of feed and habitat for pollinators species and demonstrate co-benefits when planted alongside crop/pasture considerations aimed at improving pollinator biodiversity and habitats (see below). Furthermore, antimicrobial and anticancer compounds have also been isolated from different cucurbit species which could provide a further market for their incorporation in UK crops in the future (see below for more on pharmaceuticals in crops). Despite these benefits, alongside the general ease of adaptation of cucurbits to various field conditions, cucurbits are known to face huge wastage issues surrounding the development of rots. A European Innovation Partnership (EIP) in Wales is currently looking at blossom end rot in pumpkins to determine how nutrient supplementation might help to prevent crop losses associated with cucurbit species, allowing these crops to become even more feasible for use in a diversified crop rotation or system. 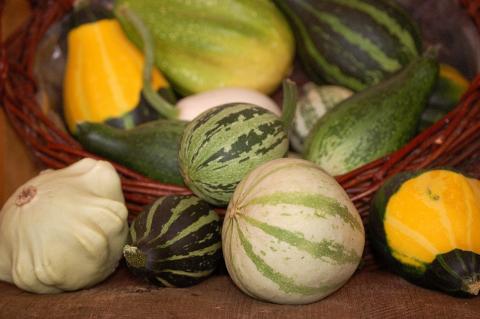 Another diversification option is asparagus, where profits of between £2,255 and £8,891/ha average annual gross margins can be achieved for non-organic systems (varying due to retail or wholesale prices achieved). A European Innovation Partnership (EIP) project in Wales evaluating organic asparagus growth (with slightly lower yields in comparison) has suggested between £10,000 and £24,000/ha annual potential profits if farm shop prices are achieved demonstrating its lucrative potential.

Another way to look at alternative food source options is to attempt to utilise readily available resources which are currently underutilised and undervalued. one example of this is birch sap, which can be harvested from common birch trees readily found across the UK and could be of high value due to its 5 times higher sugar content than maple syrup. A European Innovation Partnership (EIP) project in Wales is attempting to ascertain the best methods of tapping and processing birch sap to be sold on as a high-value food product. Countries such as Canada are well known for their utilisation of tree sap (Maple syrup) food products for high-value products, as such it is clear markets can be found and farmers could make use of birch already on their land or encourage further planting for food production as well as agroforestry related benefits. 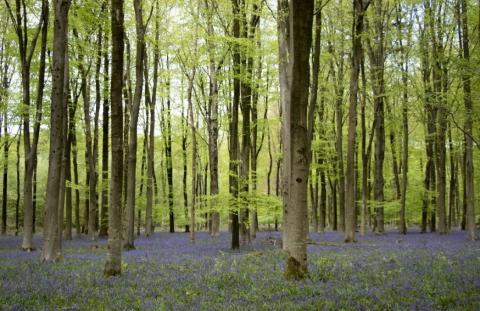 For hundreds and thousands of years, medicinal plants and phytopharmaceuticals have been a key tool in the arsenal of medics and healers with the philosopher Hippocrates recorded as saying “Let food be your medicine and medicine be your food” over 2400 years ago. The market for herbal remedies and natural treatments is still significantly large globally, often irrespective of scientific confirmation of beneficial health aspects of the products. However, advances in modern analytical tools such as mass spectrometry, nuclear magnetic resonance technologies and a whole host of different chromatography and ‘omics’ tools have made screening and evaluating plants for medicinal properties far quicker and easier. Where plant crops are found to have highly pharmaceutically relevant production levels of compounds this opens up entirely new crop growth options other than, or sometimes in combination with, food production for farmers. Examples include the production of galanthamine, a licensed treatment for Alzheimer’s disease, which can be extracted from Narcissus spp (daffodils). In Welsh trials, it has been found possible to incorporate daffodils into less favoured upland areas allowing the continuation of traditional livestock systems whilst supplementing economic ventures with a high demand high-value crop. An array of other secondary metabolites from a diverse range of plants including compounds such as alkaloids, flavonoids, tannins, terpenoid and saponins have shown multiple animal and human health benefits (see table below). Similarly, in one of the European Innovation Partnership (EIP) projects in Wales, squill production was assessed due to its roles in producing glycosides used in medicines such as cough syrup. Whilst the project did find production to be possible in Wales it did highlight the need to perform trials and optimisation testing to develop crop production systems for potential high-value crops which have previously been optimised for significantly different climates. 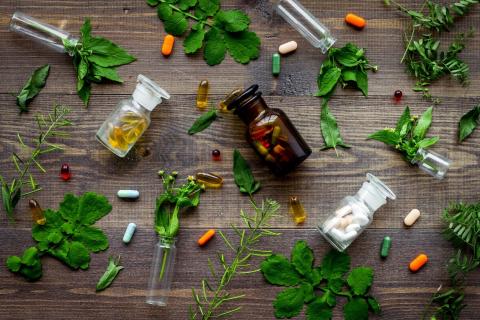 Environmental sustainability and improved biodiversity are very much at the forefront of consideration in the agricultural sector worldwide. Replacements for farm basic payment schemes have been earmarked to focus on areas that demonstrate significant impacts on both of these factors. One way that growers can seek to achieve such objectives for subsidy is in improving the management of pastures which may currently be underutilising their carbon sequestration potential whilst overutilizing chemical inputs. Strategies such as species-rich grasslands, herbal leys and cover crops have previously been investigated for their roles in sustainability through soil health improvement, forage availability and carbon sequestration to name a few benefits. Two European Innovation Partnership (EIP) projects in Wales which have sought to look at these aspects in different ways have involved the use of alternative forages specifically on marginal land, as well as the use of optimised cover crops to encourage wildlife biodiversity year-round. Where multispecies mixes were evaluated, the project struggled to find major productivity benefits but did see at least equivalent levels to conventional ryegrass. Combining this with likely environmental benefits associated with multispecies mixes makes them of high interest particularly following further optimisation. Bolstering bird species presence via cover crops can impact positively on entire eco-systems present on farms if performed correctly. Manipulation of biodiversity can allow for biological pest control of detrimental insect impacts and act as a natural re-seeding mechanism for wild seed populations. 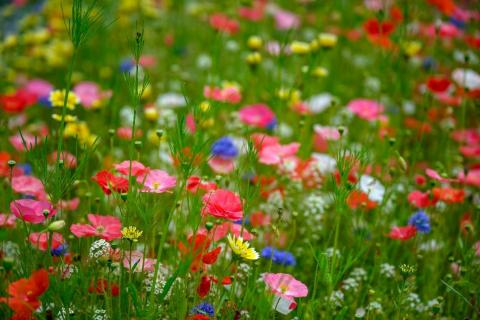 With the focus for Welsh and UK wide agriculture moving towards “long term sustainability” and “mitigating or reversing environmental impacts” one factor to achieving this involves developing self-sustaining and stable ecosystems. Whilst such systems are highly complex and involve many different species working in harmony it is well known that pollinators play a vital role in maintaining and increasing plant species presence and species diversities. It is suggested that the value of insect pollination of crops is worth £690 million per year in the UK, however, generally, the numbers of pollinators are in decline. This decline of pollinators could in future become a significant risk to overall food security, as such, crop and land management considerations surrounding this issue are vital. Current potential negative agricultural impacts can be linked too; 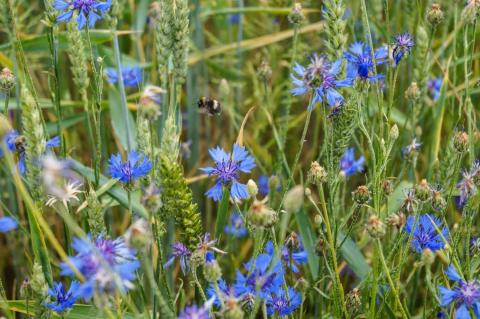 One of the most important groups within pollinators are bees, with bumblebee species often used as indicators species for pollinators as a whole. Mitigation of the negative effects outlined above can be achieved in a variety of ways via pasture change considerations. One such consideration which has undergone investigation by a European Innovation Partnership (EIP) project in Wales involves changes in field grazing and cutting procedures to maintain constant habitat resources for pollinator species. In the study maintaining strips of land which were not/grazed or cut, to allow flowering, supported the continued presence of pollinators and bees on farms. Previous research has suggested that diverse herbal ley flower mixes consisting of leguminous and non-leguminous forbs are a key method of improving pollinator numbers. These kinds of strategies could incorporate synergistically if managed correctly with the alternative forage suggestions above. Other considerations include;

Many of these alternative options and strategies would likely synergise well towards more holistic overall impacts on agricultural sustainability and environmental impact reductions. Examples above include the use of cucurbits which can not only act as a high-value crop in their own right but could also have supplemental markets as pharmaceuticals and play key roles in providing food sources for a diverse pollinator population. Many practices fall well within the parameters of sustainable and regenerative farming which are already principles seeing increasing presence, utilisation and understanding both globally and within the UK. However, far more trials and knowledge gathering assessments are needed to optimise best practices for growers and provide evidence of benefits to drive the desires of UK consumers and retailers. Initial work in these EIP projects has scratched the surface and hopefully, such promising initial results will at least get other growers to begin to consider the vast variety of these alternative options.