In March 2020, the Chief Medical Officer, Dr Frank Atherton wrote to 125,000 clinically vulnerable people requesting them to take shielding measures, including staying at home for 12 weeks. As a result of this advice the Welsh Government explored the provision of food boxes for those people in Wales who had no family or friends for support, or were unable to access online food deliveries due to unprecedented demand.

Due to the rapidly changing situation and seriousness of shielding for those who were clinically vulnerable the Welsh Government had to act quickly.

The Welsh Government adopted an approach to replicate the Defra national scheme, using the already appointed distributor, Brakes and Bidfood, as its template for providing a food provision operation across Wales. Choosing this option allowed the Welsh Government, both quickly and effectively provide an ‘off the shelf’ solution to a national emergency. The role of a Welsh scheme became operational within two weeks of the initial announcement.

The Welsh adaptation of the national scheme was expanded and added to by the Welsh Government Policy Team, Food and Drink Division and Health Team, who worked closely with Defra and the national distributors Brakes and Bidfood to agree a clear delivery plan for Wales. It was decided that under the challenging circumstances of a global pandemic that the food boxes would be a ‘one size fits all’ solution that would provide basic food supplies to recipients who were in desperate need.

The staples of the food box in Wales consisted of: milk, potatoes, bottled water, biscuits, bread, breakfast cereal and non-dairy margarine and subject to availability, all these items were sourced in Wales.

The scheme in Wales lasted in total for 20 weeks, extended from the initial period of 12 weeks. In total 214,711 boxes were delivered in Wales over a 20-week period. 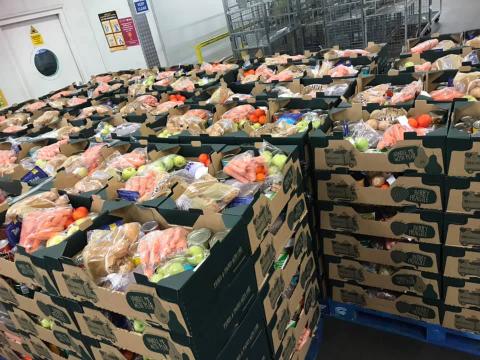