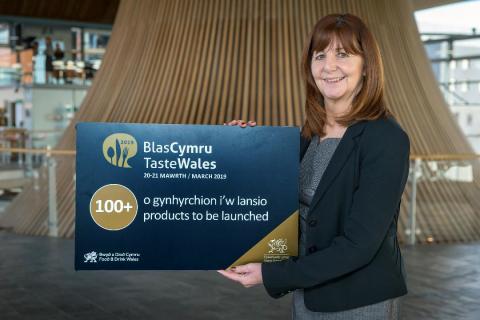 Over a 100 new food and drink products are to be launched by the industry at the forthcoming BlasCymru/TasteWales international trade event (March 20-21).

The milestone has been reached in part thanks to initiatives put in place by Food & Drink Wales over recent years, such as their Cluster Network approach that brings like-minded businesses together to share best practice and develop new ideas. This has been boosted further by the support on offer to start-ups by Cywain and the innovation-focussed Project HELIX programme.

The new products to be launched vary widely and include new yoghurts, baked products, new food service offers and product packaging. They will be sharing that stage with some of the food world’s leading speakers and thinkers that will be taking part in the event and accompanying conference, as Welsh food and drink continues to develop its reputation on the international stage. These include Claus Meyer, whose Noma restaurant has been named the world’s best on four occasions.

One of the companies launching new products is pioneering vegetarian and vegan business, The Parsnipship Ltd. Commenting on their plans, Director Flo Ticehurst said: “We have four new lines coming out, two veggie and two vegan burgers. We were inspired to start our business after years of being disappointed at the meagre offerings available for vegetarians and vegans. The upcoming trade event is a great time to showcase some new products as well as our wider offer.”

Commenting ahead of BlasCymru/TasteWales Minister for Environment, Energy and Rural Affairs, Lesley Griffiths, added: “We can clearly see that the extra support given in the food and drink industry over recent years, from a Cluster Network approach through to food innovation and start-up programmes, continues to help the industry in leading the way in new innovative products. With the challenge of Brexit it is more important than ever we support Welsh food and drink businesses in every way we can and help ensure their future sustainability.

“Surpassing 100 new products to be launched during the event makes it an added celebration of what Wales has to offer both to the domestic and international marketplace.”

Other companies present with new products include Radnor Hills, who will be launching a range of Natural Energy Water, which contains zero sugar and added B vitamins. William Watkins, Managing Director of Radnor Hills said: “We wanted to create the ultimate energy water which contains natural caffeine and is designed to give consumers a convenient energy boost without the dreaded sugar crash. The range is specifically designed for the convenience, grab and go sector offering on-the-go energy, which is sugar free and natural caffeine. We at Radnor Hills are hoping to revitalise, rejuvenate and refresh the nation in a healthy, natural way.”

The Coconut Kitchen, award winning producers of authentic Thai sauces, marinades and curry pastes are launching a foodservice range for four of their products which will come in 2.5 litre jerry cans.

Director Paul Withington comments “We have had a lot of requests for foodservice over the last two years and now that we have sold our restaurant, we decided it was the right time to go into this market with two of our bestselling curry pastes and Vegan stir-fry sauce.”

With preparations by the Welsh Government’s Food Division already well underway, new figures show that 2017’s inaugural BlasCymru/TasteWales generated over £14 million in additional sales and contracts, with high hopes for an even better performance this time round.

It was announced last year that industry giant Princes had been unveiled as headline sponsor, with a range of other companies lending their support for the largest showcase of Welsh food and drink ever put together.